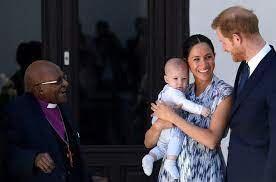 Archbishop Desmond Tutu, who died on Sunday at the age of 90, received an emotional tribute from Prince Harry and Meghan Markle.

Prince Harry and Duchess Meghan reflected on their encounter during a royal visit to South Africa in 2019 as they mourned the death of the human rights leader.

In a statement, Harry and Meghan expressed, “Archbishop Tutu will be remembered for his optimism, his moral clarity, and his joyful spirit. He was an icon for racial justice and beloved across the world.”

They also recalled the deceased’s memorable jokes with baby Archie. “It was only two years ago that he held our son, Archie, while we were in South Africa – ‘Arch and The Arch’ he had joked, his infectious laughter ringing through the room, relaxing anyone in his presence. He remained a friend and will be sorely missed by all,” the statement added.

In November 2015, Harry and the late Archbishop received the Insignia of Honorary Member of The Order of Their Companions of Honour on behalf of the Queen.

Meanwhile, the Royal Family has issued a statement in response to Archbishop Tutu’s passing.