The deal is done 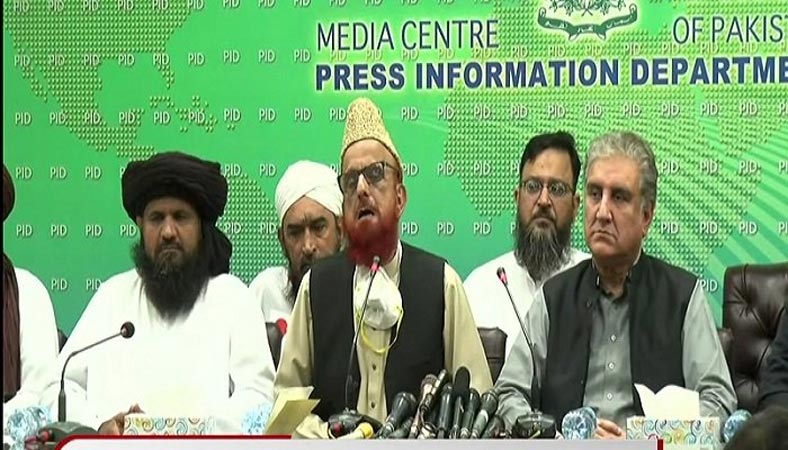 The government and the Tehreek-e-Labaik Pakistan (TLP) Sunday reached an agreement that the negotiations committee said would show positive impacts by the coming week or 10 days as a steering committee was also formed for implementation of the agreement.

“The agreement was signed following detailed talks between the government and TLP leadership. Its positive outcomes would appear within a week or 10 days. The agreement has also the endorsement of TLP head Saad Rizvi,” said Mufti Munibur Rehman talking to media at a press conference.

Mufti Munibur Rehman who played a role in reconciliation along with Chairman of Saylani Welfare Trust Maulana Bashir Farooqui during the talks told the media that under the agreement, a steering committee has been formed to be headed by State Minister Ali Muhammad Khan to oversee the implementation of the agreement “in letter and spirit”.

The steering committee would also be comprised of Punjab Law Minister Raja Basharat, Federal Interior Secretary and Punjab Home Secretary. While from TLP, Mufti Ghulam Ghaus and Engineer Hafeezullah Alvi would be the members of the steering body. “It will start functioning immediately,” he added.

Praying for the peace of departed souls of policemen and TLP workers who lost lives during the protest, he thanked the government, opposition and media for supporting peace and calling for avoiding the use of any force. He said the contour of the agreement would be shared later on a suitable time.

He thanked Prime Minister Imran Khan for forming the committee, empowering and trusting it to help resolve the issue amicably.

Mufti Munib said the agreement has been reached before any deterioration of the situation. “This is not the victory of any individual, but it is the victory of Islam, patriotism, and protection of human lives,” he remarked.

Mufti Munib told the media that the talks were held in an independent, serious and responsible atmosphere without any duress and lauded the contribution of all religious leaders to achieve the objective. He said the agreement was signed after sense prevailed over aggression, rationality prevailed over emotions, and all the participants demonstrated patience.

Mufti Munib also asked media to portray the agreement positively and contribute to the sincere efforts of the committee which held negotiations for consecutive 12-13 hours. He said the agreement would be different from the previous ones which used to be negated hours after its signing.

Foreign Minister Shah Mahmood Qureshi also thanked Ulema, who met the prime minister on Saturday and assured their support and played their part to steer the country out of an ordeal. He said the committee was formed after the National Security Committee decided to prefer the course of dialogue and resolve the issue prudently.

Keeping in view the same mandate, he said the committee worked to address the perturbance among the people and do away with the situation which had led to the killings, losses of properties and economy. “We saw the loss of lives, property, chaos at hospital, difficulty in people’s movement, fear of economic loss, so we chose the path of peace.” Qureshi said the course of dialogue was opted keeping in view the national interest as any violence could appease none but the anti-state elements.