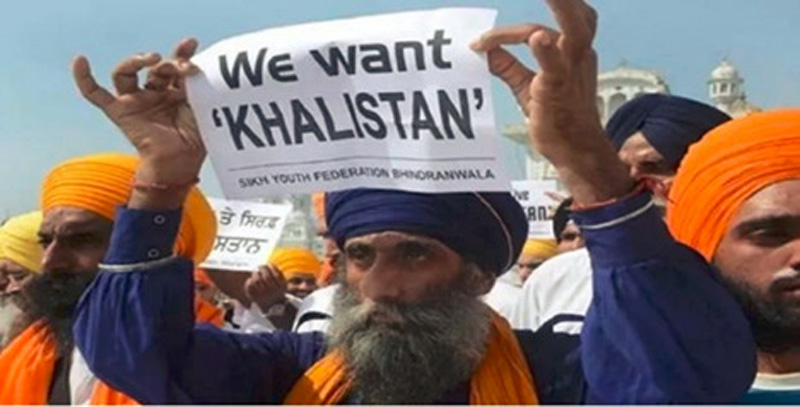 The Sikhs for Justice (SFJ) has released a new map of India showing not just Punjab but Haryana, Himachal Pradesh and several districts of Rajasthan and Uttar Pradesh as part of Khalistan.

Sikhs for Justice is a US-based Sikh organization that supports the secession of Punjab from India for the creation of Khalistan. It was founded and primarily headed by lawyer Gurpatwant Singh Pannun. It was banned in India in 2019 as an unlawful association. The ban came after it started campaigns for a Punjab independence referendum in 2019 to carve out a separate Khalistan.

The organization has been fighting a long peaceful legal battle against the Indian government and politicians involved in the 1984 deadly operation against Sikhs since 2011. Sikhs For Justice had filed criminal and human rights cases in the US courts against prominent leaders of the Congress Party (involved in Golden Temple Massacre).

In February 2014, the organization filed human rights violation case against then Indian PM Dr. Manmohan Singh (a Sikh himself) for his role as finance minister of India in the 1990s accusing him of “funding crimes against humanity perpetrated upon the Sikh community in India”. They also submitted a report to United Nations Commission on Human Rights on 1984 anti-Sikh riots. SFJ started organizing a campaign for ‘Referendum 2020’ for the secession of the Indian Punjab state from India. The campaign was delayed due to the covid-19 pandemic.

Sukhpal Singh Khaira, MLA of Punjab Legislative Assembly and the Leader of Opposition at the time, said, “Sikh Referendum 2020 was a result of consistent policy of bias, discrimination and persecution towards the Sikhs by successive governments in India”.

The new map clearly depicts that the area will be cut off from India and made the Sikh country “Khalistan”.

SFJ has designated areas that would be seceded from India for the establishment of Khalistan.

In Rajasthan, far-flung Bundi and Kota have also been counted as ‘Khalistan.’ It has been claimed that these parts will be cut off from India. The map was released ahead of the organization’s effort to hold a world over the non-binding peaceful referendum to gauge support for creation of Khalistan beginning next week (Oct 31st) in London, at the Queen Elizabeth Centre. The referendum is likely to gather huge support for the just cause and demands of Sikhs of India.

Sikhs have been facing systematic persecutions and continuous exploitation at the hands of successive Indian governments. The movement itself is a big question mark on the secular face of India.

The latest move by the organization fully supported by Sikhs all over the world is a clear sign of the desperation of minorities in India to get out of the hold of highly biased and brutal Hindutva regime.

The demands of Sikhs also exhibit that minorities of India now clearly understand that the future of their coming generations is at serious risk. The world community and international stakeholders/ organizations must take appropriate measures to avert the looming human catastrophe for Muslims and minorities in general and Kashmiris in particular.