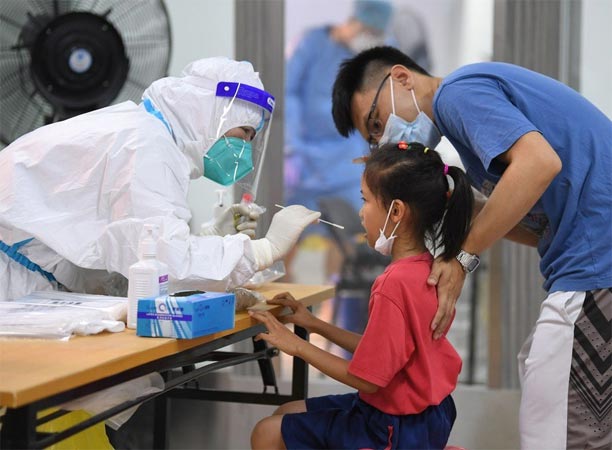 Chinese researchers have reported the complete transmission chain of the Covid-19 Delta variant and its viral kinetics and clinical characteristics, providing data for the prevention and control against the strain.

The relevant study was conducted by researchers from the Guangzhou Eighth People’s Hospital and other research institutes. It was based on an outbreak in May caused by the Delta variant in Guangzhou in south China’s Guangdong Province.

Analysing the epidemiological and clinical data of patients infected with the Delta strain, the researchers found that the Delta variant had a significantly shorter incubation period, higher viral load, and a more extended period of viral shedding.

When a person gets infected by a respiratory virus, the virus particles will bind to viral receptors, like the ACE2 receptors in Covid-19 that line the respiratory tract. The infected individuals, who may not yet be experiencing any of the viral symptoms, go on shedding viral particles during daily activities like talking, exhaling, and eating, which is called viral shedding. The Delta variant can spread for four generations in 10 days, with the fastest intergenerational transmission taking less than 24 hours.

The researchers also found the Delta strain in Guangzhou was mainly spread through direct and interproximal contact. Transmission via dining accounts for 31.41 per cent of infections, followed by household contact accounting for 30.13 per cent, community transmission at 18.59 per cent and other transmission routes including work and social contact at 19.87 per cent.

The Delta variant also had a higher risk than other Covid-19 viruses in developing critical status among older people. The findings have been published in EClinicalMedicine, an open-access clinical journal published by The Lancet. The researchers believe their study will provide insights into understanding the characteristics of the Delta variant, which can help achieve effective containment of this emerging widespread strain.