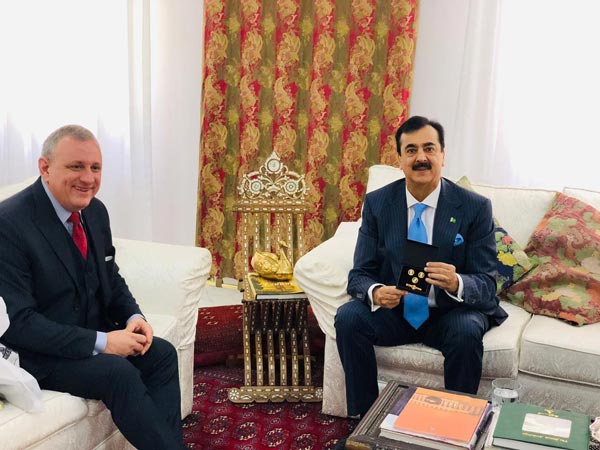 Leader of the Opposition in Senate and former prime minister Yousaf Raza Gilani called on Ambassador of Italy Andreas Ferrarese at his residence on Tuesday. The two sides discussed the upcoming 26th climate change conference to be held in Rome on 8-10 October, wherein Gilani will lead a six-member Pakistani delegation.

Ambassador of Italy extended a warm welcome to the former prime minister. They discussed historical linkages between the two countries and shared perception on broad range of regional and international issues. Andreas Ferrarese informed that he and his colleagues in Italy are looking forward to welcome the Leader of the Opposition in Rome.

Yousaf Raza Gilani will be leading a delegation from Senate to attend the Pre-COP26 parliamentary meeting being held in Rome. The meeting will bring together parliaments from around the world and provide a platform for discussing how to advance parliamentary action on climate change at national, regional and international level. In the context of COP26, Senator Gilani will be presenting the case of Pakistan to reflect on what has been achieved since the Paris Agreement was ratified by Pakistan in 2016 and to set concrete plans to reach the agreement targets, at a time when the climate crisis is more critical than ever.

The two sides also discussed progress on a project regarding renovation and restoration of historical buildings in Multan initiated many years ago. It was agreed that the ambassador will soon visit Multan to oversee the renovation work and discuss number of other opportunities for promoting cultural and religious tourism in Pakistan. The ambassador showed keen interest to further enhance the relations between the two countries. He ensured his full support for the visit.