Opp vows to block PMDA bill, at all costs 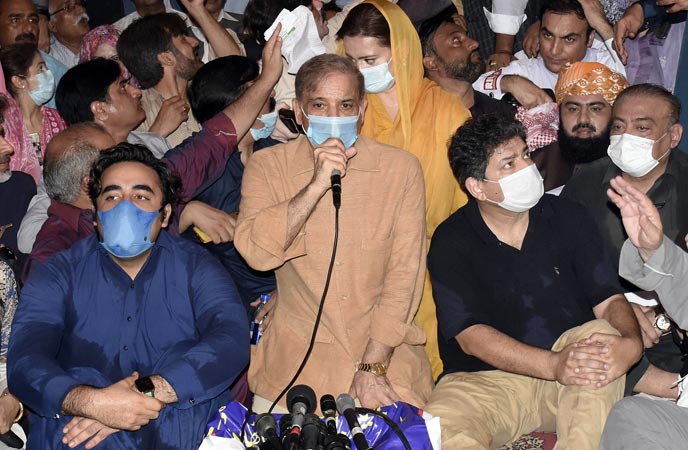 The opposition parties on Monday vowed to stop the government from passing legislation in the parliament on what the termed draconian Pakistan Media Development Authority (PMDA).

On Monday, student unions and members of civil society also expressed solidarity with protesting journalists outside Parliament House in Islamabad, joining them in raising their voice against the proposed PMDA bill. The protesting journalists had marched on Sunday from the National Press Club and reached outside the Parliament House. They had been staging a sit-in since and continued the protest till President Dr Arif Alvi’s address to the joint session of parliament on Monday afternoon.

Addressing the sit-in, Opposition Leader in National Assembly and PML-N leader Shahbaz Sharif said he condemns the ‘draconian’ PMDA. He also vowed to not let the government pass legislation on it in the parliament. “All of PDM’s (Pakistan Democratic Movement) parties support journalists […] the media has always fought for its freedom,” the opposition leader told the protesters, and assured that nor did the government have it in itself and neither will his party allow the government to legislate on the media authority. “The government doesn’t have the guts to pass it and we won’t allow it,” he thundered, and warned the government against passing the ‘black law’ otherwise it would have to bear the consequences.

He said the media had a fought a war for its freedom and no one could snatch it, adding that he would protest the issue with other opposition leaders in the National Assembly and try to achieve consensus with PPP and other political parties. 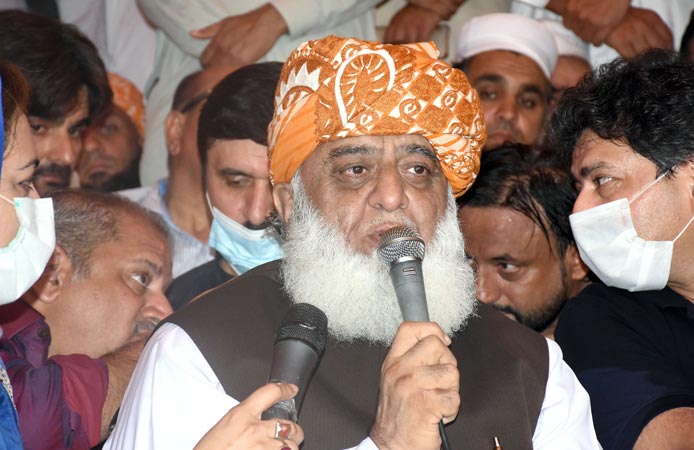 Addressing the protest, PPP Chairman Bilawal Bhutto-Zardari slammed the proposed PMDA, saying that the proposed bill is an “attack on the freedom of media and judiciary.” He said his party will attend the joint sitting of the Parliament with a two-point agenda; to advocate for the rights of 20,000 government employees who were sacked and to campaign for the freedom of speech. “These employees were not the PPP’s workers,” he said. “This is the second time that government employees have been fired. What will they do now?” he asked.

The PPP chairman vowed his party will not let the government get away with snatching livelihoods from the masses. He showed solidarity with journalists who have been attacked, saying that the PPP “will not be satisfied till they are not satisfied.”

Even if they manage to have this black law passed, journalists will [struggle to] have it abolished,” he added.

Hitting out at the prime minister, the PPP chairman said the opposition was united against the PTI government. “They do not let the opposition speak,” he said. “The government tries to have laws passed secretly.”

Bilawal warned the government that if it tried to have the PMDA law passed via force, the PPP will challenge it in the courts. The PPP chairman said he feared the government will try to pass the bill during a joint sitting of the Parliament. “In protest of governments black law to silence free media, black decisions that have left 20,000 families unemployed, insults hurled at ECP and continued political victimisation of opposition & press; we walked out of the presidential address to joint session,” Bilawal added.

Later on, JUI-F President Maulana Fazlur Rehman also joined the protest and expressed solidarity with the media workers and civil society members, saying that his party “will not accept the laws that contradict the constitution.” He said that democratic politics is always in the favour of media’s freedom. “All of us are united on the freedom of media, said Fazl, adding that the JUI was the first party to decide to oppose the PMDA.

Federal Minister for Information and Technology Aminul Haque also addressed the protestors and said MQM-P has a clear stance on the PMDA – all stakeholders should be made a part of any media-related legislation. “I request the government to speak to the journalists in this regard […] I am against the restrictions being enforced on the media and stand with journalists,” he said.