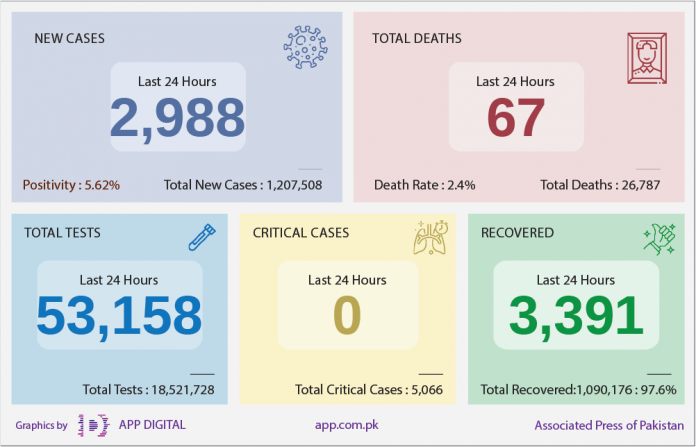 ISLAMABAD: The national tally of active COVID-19 cases was recorded 90,545 on Monday with 2,988 more people tested positive for the deadly virus and 3,391 people recovered from the disease during the past 24 hours.

Sixty-seven corona patients have died during last 24 hours, 62 of whom were under treatment in the hospitals and five of them perished in their respective quarantines or homes, according to the latest update issued by the National Command and Operation Centre (NCOC). Most of the deaths occurred in Sindh followed by Khyber Pakhtunkhwa (KP). Out of the total 67 deaths that occurred, 24 were on ventilators.

There were 5,066 Covid infected patients under treatment in critical condition in various Covid dedicated healthcare facilities of the country. The National Covid positivity ratio during past 24 hours was recorded as 5.62 percent. The Covid positivity ratio is the percentage of actual positive cases appearing in every 100 tests performed to identify infected individuals. The maximum ventilators were occupied in four major cities including Sargodha 61 percent, Bahawalpur 47 percent, Lahore 59 percent and Multan 76 percent.

The maximum Oxygen beds (alternate oxygen providing facility other than ventilator administered as per the medical requirement of COVID patient) were also occupied in four major cities of Sargodha 78 percent, Swabi 60 percent, Multan 66 percent, and Gujrat 63 percent. Around 558 ventilators were occupied elsewhere in the country while no COVID affected person was on a ventilator in Balochistan and Gilgit Baltistan (GB).

A total of 18,521,728 corona tests have been conducted so far, while 640 hospitals were equipped with COVID facilities across the country.
Some 5,425 corona patients were admitted to hospitals.