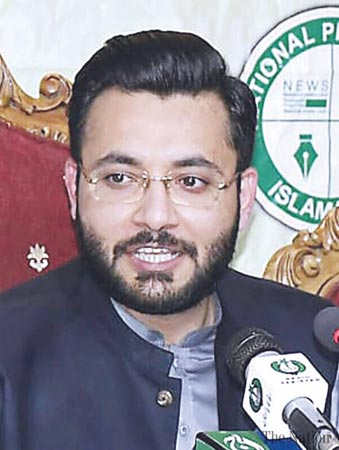 State Minister for Information & Broadcasting Farrukh Habib said on Sunday the PTI government was actively assisting Election Commission of Pakistan (ECP) to hold fair, free and impartial elections through elections reforms. Addressing a press conference here, he said that past regimes intentionally ignored the important aspect of holding fair, free and impartial elections and after each election, allegations of rigging were levelled by the defeated parties.

He said the PTI government intended to introduce Electronic Voting Machine (EVM) with an aim to ensure a credible election results, but opposition parties were opposing it despite the fact that the clause 103 of the Elections Act 2017 had clearly mentioned that technology could also be used to ensure fair, free and impartial elections. He said that under article 103, the ECP was empowered to use electronic machines. Similarly, under the clause 94 of the Elections Act 2017, oversees Pakistanis had been given right to vote and for this purpose, the ECP was asked to launch a pilot project to involve the expats in the main election process. Farrukh Habib said that overseas Pakistanis were sending 30 billion dollars remittances annually but the opposition parties were not willing to give them the right of vote despite their major contribution towards the national economy. He said the PTI government wanted to help election commission but it was strange that the ECP had raised objections. A group who was in the habit of rigging the polls was opposing transparency in the election process, he added. He said the ECP also failed to eliminate the bogus votes registered in the previous lists. He said that in a single house, more than 200 votes were registered. Similarly, fake ballot papers were printed by the ‘Thappa Mafia’ who was opposing the EVM. The State Minister said that the objection by ECP were carried by media before it were received by the government.

He said the ministry of Science and Technology and the ministry of Information Technology were working on elections reforms as true democratic system could only be strengthened by ensuring fair and free elections. In this connection, more than 50 meetings were held in which deliberations were made to eliminate the genuine reservations of opposition parties, but Maryam, Bilawal and Shahbaz rejected the EVM without evaluating it scientifically, he added. During a question-answer session, Farrukh Habib said that Form-45 would be released three minutes after the completion of polling.

The state minister said that people of Pakistan had the right to elect government in a most transparent manner. “We have used technology to compile the land record and started electronic banking”, he said and added that on the same pattern electronic voting machines had been introduced to end the objections of rigging in future. He said, though ECP was a constitutional autonomous body, but the parliament was a supreme body and it must be given due respect.