US strikes ‘explosive-laden car’ in Kabul after terror warning

* Local media reports possible civilian casualties, which US says it is 'assessing' 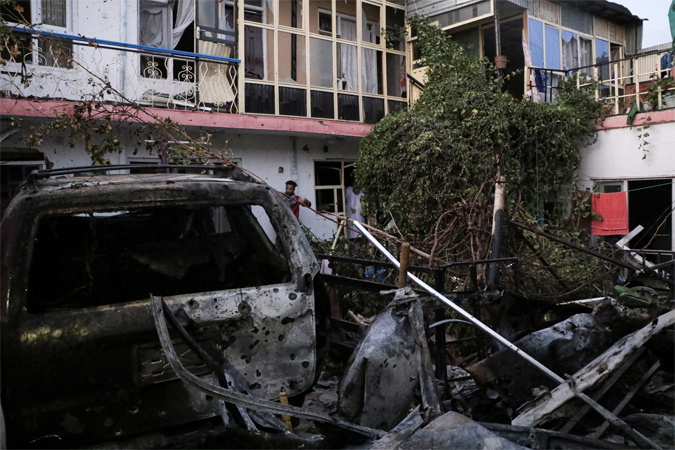 The United States said it destroyed an explosive-laden vehicle with an air strike in Kabul on Sunday, hours after President Joe Biden warned of another terror attack in the capital as a massive airlift of tens of thousands of Afghans entered its last days.

A Taliban spokesman confirmed the incident, saying a car bomb destined for the airport had been destroyed – and that a possible second strike had hit a nearby house.

The US said it had only struck the vehicle, but added that secondary blasts indicated “a substantial amount of explosive material”. Local media reported possible civilian casualties, which the US said it was assessing.

And with just two days to go until the agreed-upon date for US withdrawal, the Taliban revealed their supreme leader Hibatullah Akhundzada was in southern Afghanistan and planning to make a public appearance. “He is present in Kandahar. He has been living there from the very beginning,” said Taliban spokesman Zabihullah Mujahid.

“He will soon appear in public,” added deputy spokesman Bilal Karimi of the leader, whose whereabouts have remained largely unknown and who has never made a public appearance.

The US air strike came after a suicide bomber from the Islamic State group on Thursday targeted US troops stopping huge crowds of people from entering Kabul’s airport. About 114,000 people have been evacuated since August 15, when the Taliban swept back into power.

More than 100 people died in the attack, including 13 US service personnel, slowing the airlift ahead of Biden’s deadline for evacuations to end by Tuesday.

US Secretary of State Antony Blinken said Sunday that some 300 Americans still in Afghanistan were seeking to leave the country.

“They are not going to be stuck in Afghanistan,” National Security Advisor Jake Sullivan said on the Fox network, adding that the US had “a mechanism to get them out”.

The Pentagon said Saturday that retaliation drone strikes had killed two “high-level” IS jihadists in eastern Afghanistan, but Biden warned of more attacks from the group.

“Our commanders informed me that an attack is highly likely in the next 24-36 hours,” Biden had said.

The US embassy in Kabul later released a warning of credible threats at specific areas of the airport, including access gates.

In recent years, the Islamic State’s Afghanistan-Pakistan chapter has been responsible for some of the deadliest attacks in those countries. They have massacred civilians at mosques, public squares, schools, and even hospitals.