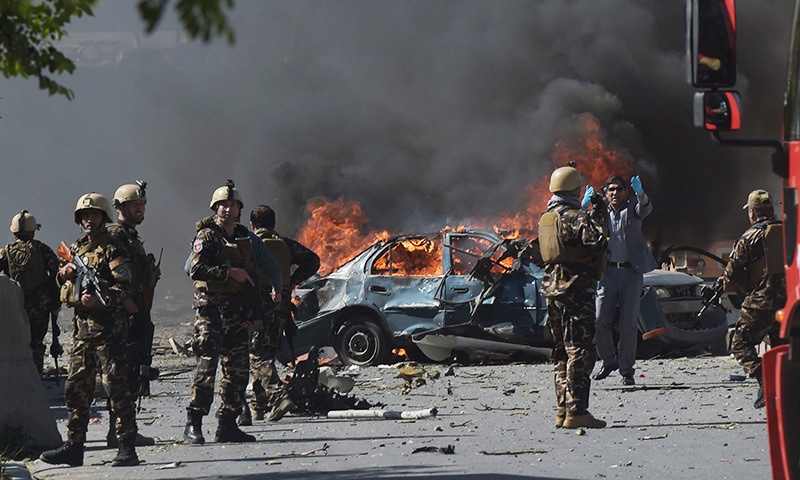 At least 100 people have been killed and 150 wounded, in the killed people probably 95 were Afghan and 13 were US military soldiers, confirmed international media report.

The bombings came hours after Western governments had warned their citizens to stay away from the airport, because of an imminent threat of an attack by IS-K, the Afghanistan branch of the Islamic State group.

The first explosion happened at about 18:00 local time (13:30 GMT), close to the Baron Hotel, near the airport’s perimeter. The hotel was being used by British officials to process Afghans hoping to travel to the UK. It was followed by gunfire and then a second explosion close to the Abbey Gate, one of the airport’s main entrances.

Reports say the second explosion took place near a sewage canal where Afghans were waiting to be processed, close to the gate, and that some victims were blown into the water. A US official said that at least one attacker had been wearing an explosive vest.

According to one account, one attacker fired into a crowd of people, although reports also said Taliban guards had fired into the air. US citizens who had gone to the area around the airport had been warned before the attack to “leave immediately”.

The blasts came as the August 31 deadline looms for the United States to withdraw its troops, and for it and other Western countries to end a massive airlift that has already evacuated nearly 100,000 people.

The airport is the only part of the country under foreign control following the Taliban’s return to power on August 15, and huge crowds have massed in the hope of being evacuated. A Taliban official said at least 28 members of the group were killed in the attack.

The Taliban condemned the blasts, saying they were in an area under US military control. “The Islamic Emirate strongly condemns the bombing targeting civilians at Kabul airport,” said a statement released by Mujahid on Twitter.

Graphic video shared on social media showed bodies lying semi-submerged in a canal adjacent to the airport, where thousands have gathered since the Taliban takeover of August 15 hoping for a flight out. “When people heard the (first) explosion there was total panic,” a man name Milad told AFP. “The Taliban then started firing in the air to disperse the crowd.”

General Frank McKenzie, head of US Central Command, said US commanders were on alert for more attacks by Daesh, including possibly rockets or vehicle-borne bombs targeting the airport. US forces are racing to complete their withdrawal from Afghanistan by an Aug. 31 deadline set by President Joe Biden. Biden said he had ordered the Pentagon to plan how to strike a Daesh affiliate that claimed the responsibility.

“Pakistan strongly condemns the heinous terrorist attack at Kabul airport, which reportedly resulted in loss of precious lives, including children. We condemn terrorism in all forms and manifestations, convey our condolences to bereaved families and pray for early recovery of the injured,” the Foreign Office said.