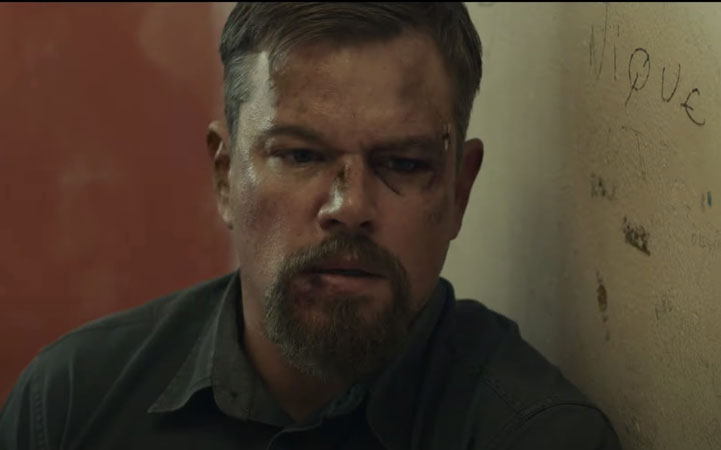 A truism about American movies is that when they want to say something about the United States – something grand or profound or meaningful – they typically pull their punches.

There are different reasons for this timidity, the most obvious being a fear of the audience’s tricky sensitivities. And so ostensibly political stories rarely take partisan stands, and movies like the ponderously earnest “Stillwater” sink under the weight of their good intentions.

The latest from the director Tom McCarthy, “Stillwater” stars Matt Damon as Bill Baker. He’s a familiar narrative type with the usual late-capitalism woes, including the dead-end gigs, the family agonies, the wounded masculinity. He also has a touch of Hollywood-style exoticism: He’s from Oklahoma. A recovering addict, Bill now toggles between swinging a hammer and taking a knee for Jesus. Proud, hard, alone, with a cord of violence quaking below his impassivity, he lives in a small bleak house and lives a small bleak life. He doesn’t say much, but he’s got a real case of the white-man blues.

He also has a burden in the form of a daughter, Allison, who’s serving time in a Marseille prison, having been convicted of savagely killing her girlfriend. The story, which McCarthy conceived of, takes its inspiration from that of Amanda Knox, an American studying in Italy, who was convicted of a 2007 murder, a case that became an international scandal. Knox’s conviction was later overturned and she moved back to the United States, immortalized by lurid headlines, books, documentaries and a risible 2015 potboiler with Kate Beckinsale.

Like that movie, which focuses on the sins of a vampiric, sensation-hungry media, “Stillwater” isn’t interested in the specifics of the Knox case but in its usefulness for moral instruction. Soon after it opens, and following a tour of Bill’s native habitat – with its industrial gothic backdrop and lonely junk-food dinners – he visits Allison, a trip he’s taken repeatedly. This time he stays. Allison thinks that she has a lead that will prove her innocence, which sends her father down an investigative rabbit hole and, for a time, quickens the movie’s pulse.

McCarthy isn’t an intuitive or innovative filmmaker and, like a lot of actors turned directors, he’s more adept at working with performers than telling a story visually. Shot by Masanobu Takayanagi, “Stillwater” looks and moves just fine – it’s solid, professional – and Marseille, with its sunshine and noir, pulls its atmospheric weight as Bill maps the city, trying to chase clues and villains. Also earning his pay is the underutilized French Algerian actor Moussa Maaskri, playing one of those sly, world-weary private detectives who, like the viewer, figures things out long before Bill does. 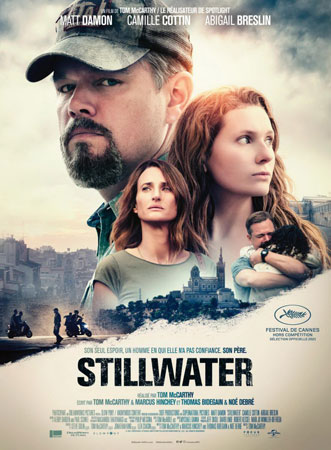 Much happens, including an abrupt, unpersuasive relationship with a French theatre actress, Virginie. The character is a fantasy, a ministering angel with a hot bod and a cute tyke; among her many implausible attributes, she isn’t ticked off by Bill’s inability to speak French. But Cottin, a charismatic performer whose febrile intensity is its own gravitational force, easily keeps you engaged and curious. She gives her character juice and her scenes a palpable charge, a relief given Bill’s leaden reserve.

There’s little joy in Bill’s life; the problem is, there isn’t much personality, either. It’s clear that Damon and McCarthy have thought through this man in considered detail, from Bill’s plaid shirts to his tightly clenched walk. The character looks as if he hasn’t moved his bowels in weeks; if anything, he feels overworked, a product of too much conceptualizing and not enough feeling, identifiable humanity or sharp ideas. And because Bill doesn’t talk much, he has to emerge largely through his actions and tamped-down physicality, his lowered eyes and head partly obscured by a baseball hat that hangs over them like a visor.

It is, as show people like to say, a committed performance, but it’s also a frustratingly flat one. Less character than conceit, Bill isn’t a specific father and uneasy American abroad; he’s a symbol. McCarthy tips his hand early in the first scene in Oklahoma with the image of Bill precisely framed in the centre of a window of a house he’s helping demolish. A tornado has ripped through the region, levelling everything. When Bill pauses to look around, surveying the damage, the camera takes in the weeping survivors, the rubble and ruin. It’s a good setup, brimming with potential, but as the story develops, it becomes evident this isn’t simply a disaster, natural or otherwise. It’s an omen. Like “Nomadland” and any number of Sundance movies, “Stillwater” seizes on the classic figure of the American stoic, the rugged individualist whose self-reliance has become a trap, a dead end and – if all the narrative parts cohere – a tragedy. And like “Nomadland,” “Stillwater” tries to say something about the United States without turning the audience off by calling out specific names or advancing an ideological position. Times are tough, Americans are too. They keep quiet, soldier on, squint into the sun and the void. Bad things happen and it’s somebody’s fault, but it’s all so very vague.