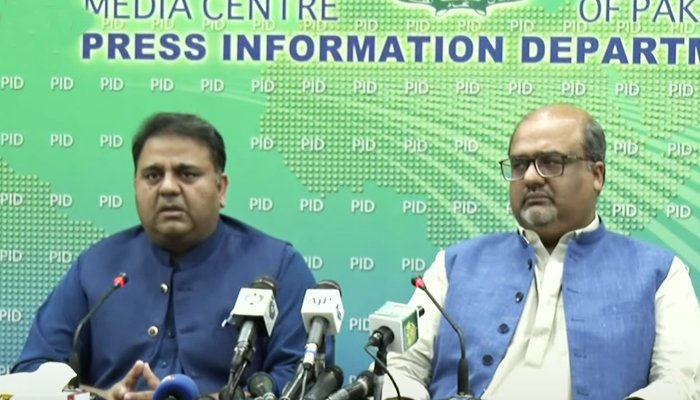 He added that it was because Mohib had earlier issued anti-Pakistan remarks.

Addressing a press conference alongside Adviser to Prime Minister on Interior and Accountability Shahzad Akbar in Islamabad, Fawad Chaudhry stated that the NSA has links with Indian Prime Minister, Narendra Modi who had always raised troubles for Pakistan.

“When two or three, who have started following the extremist ideology of Modi, meet Nawaz, then this circle [getting together] raises questions and damages our security doctrine,” he said.

In a public speech two months back, Mohib had not only repeated his allegations about Islamabad “not wanting to work with a Pashtun leader in Afghanistan” but called Pakistan a “brothel house.”

The comments raised a spark amongst leaders in Islamabad who said they debased all norms of interstate communication.

Fawad, in today’s briefing, expressed his shock over Nawaz meeting the delegation and contested that Mohib and Afghanistan vice president Amrullah Saleh do not have much stake in their country.

“It is Amrullah Saleh’s ploy to defame Pakistan […] We have also made it clear that Pakistan would not hold any talks with Afghanistan’s national security adviser [Mohib],” he said.

“We have terminated all communications with Afghanistan national security adviser’s office,” demanding that the official audio clips of the meeting must be made public.

However, he reiterated that Pakistan had always wanted good relations with India and it still wishes to.

Coming back to Nawaz’s meeting with Mohib, he said PML-N should issue a clarification on it, adding that when the Afghan official had issued anti-Pakistan remarks in May, Islamabad had cut off ties with his office.

Moreover, taking over the presser, Akbar said the NSO Group’s spyware scandal was much bigger than Panama leaks.

The adviser said that Pakistan’s sovereignty was compromised by this incident which the government was ready to protect.

Akbar said the government was considering options on how to raise the matter in the European Union and the United Nations. “We will also launch an inter-agency investigation into it.”

The adviser said the Federal Investigation Agency, Foreign Office, and other institutions would launch a probe into the matter, and following that, Pakistan would seek legal action against India.