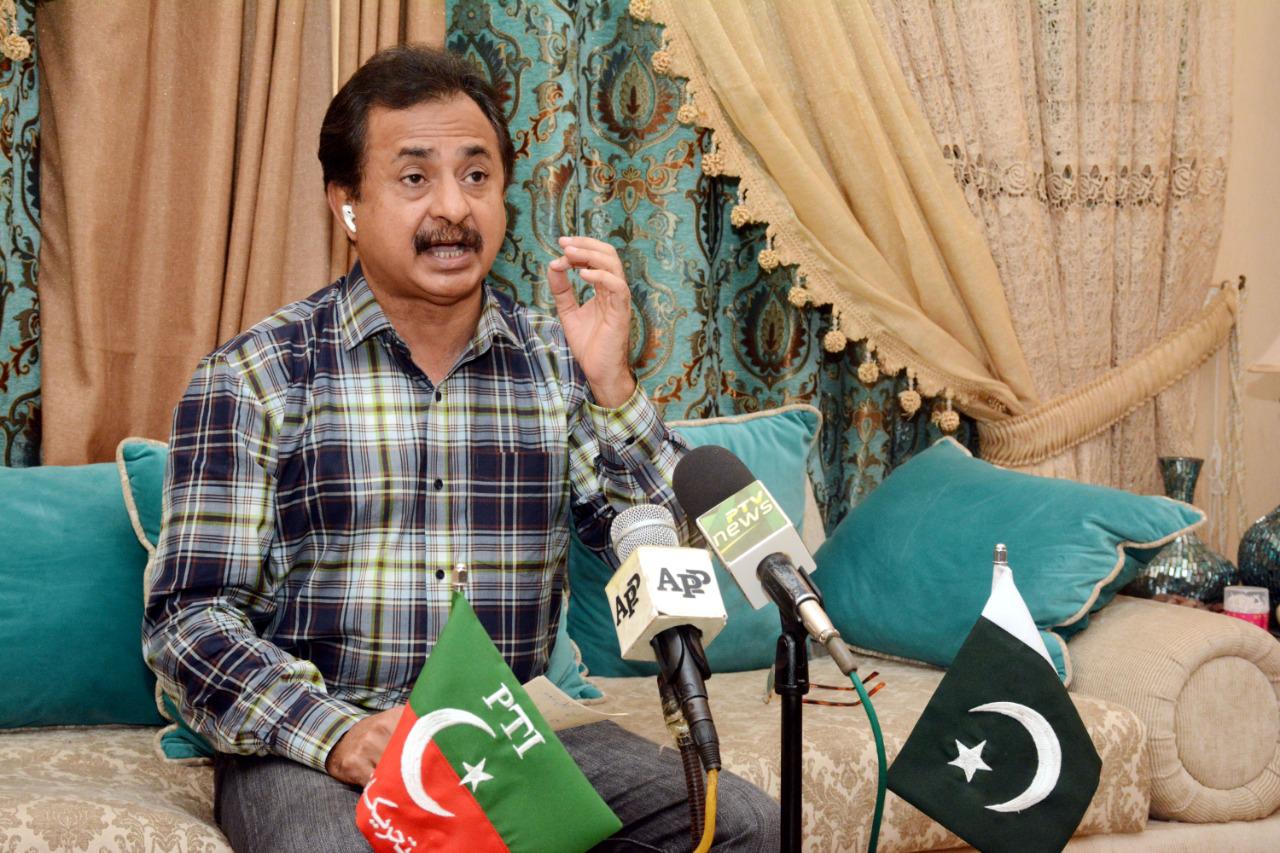 KARACHI: Mr Haleem Adil Sheikh, the Leader of Opposition in Sindh Assembly has said that Prime Minister Imran Khan is expected to hold another meeting with key PTI leaders from Sindh within the next few days to make the important decisions to strengthen the party in Sindh.

“We met with Prime Minister Khan and informed him about the situations of the province a few days ahead of the Eid and we are again meeting him to request him to make important decisions with strong actions” he added and said that Mr Khan would hold public gatherings in a number of districts of Sindh in the month of August. Mr Sheikh, who is also central vice president of PTI addressing the press conference in Adil House here on Saturday said that important decisions were likely to be made for taking actions especially against the officials of Pakistan Administrative Service, who had been holding the key posts in Sindh for 10 to 15 years and were involved in the corrupt practices with the patronage of corrupt PPP rulers. ” This is the high time to purge Sindh of such elements, who have made the lives of people miserable” he added and said that such demands would again be placed before Prime Minister Imran during their upcoming meeting with him in Islamabad for the remedial measures in the best interests of Sindh and its people.

The PTI leader said that as many as 478 officials including the incumbent provincial secretary for the finance department, who was among those, returned the looted money after NAB authorities had taken actions against them. He said the same officers were again creating the mess and hoped that the Prime Minister would throw away such officers after they would request him to take strong actions for providing some better governance in Sindh by posting efficient and honest officials. ” The people of Sindh will soon get rid of such corrupt and criminal people, who are not only looting the public money but also robbing the people on the roads and streets at gunpoint,” he said. Mr Sheikh made it clear that IG Sindh Mr Musthaq Mehar had proved more loyal to PPP leadership than to focus on his official assignments to provide security and safety to the people of the province. The PTI leader deplored that people were being robbed of their properties even on motorways and national highways in Sindh.
He alleged that high-ups of the Sindh government were least interested to launch the operation against the bandits and outlaws despite the fact Federal Interior Minister Sheikh Rasheed Ahmed had a few months back had assured them of their full support to purge the troubled areas of the hardened criminals. ” It looks that the days of the PPP government in Sindh are numbered, that is why PPP rulers are only interested to amass more money from the public exchequer,” he remarked and added that notables and those with stainless political careers were likely to join PTI during the scheduled visit of Mr Khan in Sindh.

The PTI leader lashed out at the PPP rulers in Sindh for their alleged utter failure to remove the animal waste in Karachi and other cities and towns of the province adding he asked them to stop daydreaming to win the elections in Azad Kashmir.

He said that the recent Gallup Survey should be an eye-opener for the opponents of PTI, which showed that 67 percent people of the valley had supported Prime Minister Imran Khan and hoped that despite the dirty politics by both PML-N and PPP, PTI candidates would sweep the elections on July 25. Mr Sheikh maintained that people of both sides of Kashmir fully knew who had stood for them in their struggle for freedom and incessant brutalities being unleashed on their brothers in the occupied parts of the valley. The PTI leader said that recent moves by Maryam Nawaz Sharif and PPP leadership during the elections campaign had exposed the ulterior motives that they only wanted to please their friends in India by issuing statements against the very sovereignty of the country.

He said that their party leaders were attacked during the drive and looted money was used to buy the votes of the people of Kashmir adding he said that the candidates of opposition parties would be trounced by PTI candidates with huge margins. He said that if PPP and PML-N leaders did not desist from the dirty politics they should be ready for the dire consequences.

Mr Sheikh alleged that the authorities, who were in charge of disposing off the offal and animal waste were nowhere to be seen and waste had been left to rot, which according to him, had created hazardous conditions for the people in various localities of Karachi city and other towns of the province. He said that he was ready to take the PPP ministers and advisors like Murtaza Wahab and Syed Nasir Hussain Shah in a number of the localities of Karachi where animal waste was left to rot.

“They are only busy in the photo sessions while people have been left to suffer due to deteriorating situations due to waste, garbage, and dirt.

He feared that in case of the predicted more rainfalls within the next few days, situations in Karachi might turn chaotic. He warned the officials to remove the waste of sacrificial waste as soon as possible to avoid the outbreak of any viral infection due to such prevailing situations. Mr Sheikh said that during his visit to Larkana on Friday he saw heaps of garbage and animal waste all around and people were in deep trouble due to poor and damaged infrastructure. He said that the people of Larkana informed him that they were looking for their MNA, the PPP Chairman Bilawal Bhutto Zardari, to see for himself the worst situations in their localities. He said that it was a matter of shame, the people, who could not provide the proper drainage system in a city like Larkana were claiming to bring reforms in Kashmir and other provinces if voted into power.

Mr Haleem alleged that Chief Minister Sindh Syed Murad Ali Shah had set up a cell in the Chief Minister House to earn money by allowing the drug pushers in every part of the province adding he his Personal Staff Officer (PSO) Farrukh Bashir, who also remained SSP Jamshoro . was now running and monitoring that cell. He alleged that it was clear now that drug pushers like Sarwar Rahupoto and other gangs involved in the drug peddling in Mirpurkhas and other areas were openly being supported by the PPP rulers and those sitting in the CM House in Karachi.

Mr Sheikh again asked Bilawal Bhutto Zardari to explain his position since the prime suspect involved in the recovery of 65 kg chars from the police van of Jamshoro district by the Rangers personnel, was photographed with him a number of times. He said that the PPP chairman should be questioned about his role with regard to recovery of the contraband since the main accused and his MNA brother were his close aides.

“Both CIA officer Sarwar Rahupoto and his brother Sikendar Ali Rahupoto, the PPP MNA from Jamshoro are directly involved in such illegal and criminal activities with support of the chief minister of Sindh’ he added and demanded the arrest of Mr Sarwar. Mr Sheikh said that corrupt rulers were only busy devising new plans to further loot the public money instead of spending the same amount of funds on providing any relief to the people anywhere in the province. He said that on one hand animal waste was left to rot and to create troubles for the people of Karachi while on other hand, the people affected by rains and the subsequent floods in districts like Dadu had not received any relief from the rulers. The PTI leader said that the government, which had not bothered to even buy even a single fire tender during the misrule of 13 years, would not provide other civic amenities of life to the people in any district of the province.

Mr Sheikh said that they was a charge-sheet against the PPP rulers, who were selling the jobs through the deputy commissioners and their brokers by denying the jobs to meritorious youths . He lamented that the Sindh government had failed to provide irrigation water to the farmers of the different districts and the drinking water to the people of almost all the localities of Karachi. Mr Adil, replying to a question about health cards for the people of Sindh, said that the high-ups of the Sindh government were creating hurdles in that process by not taking the active part at the time when the people of other provinces were given the cards for the best healthcare facilities. ” As long as Bhutto is alive in Sindh PPP rulers will not bother to provide basic healthcare facilities, safe drinking water, proper drainage system and other facilities’ he remarked and alleged that PPP leadership only believed in making money by hook or by crook. He said that the Federal government besides completing the mega projects would now initiate more such projects in Karachi and other districts of Sindh and would not leave people of the province in lurch.