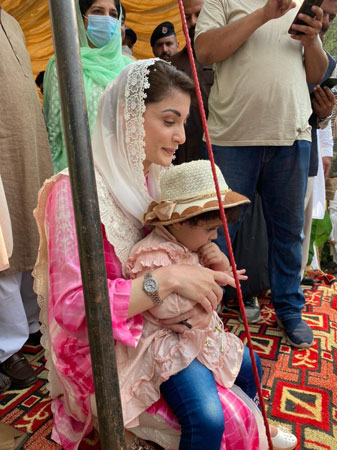 PML-N Vice President Maryam Nawaz on Sunday said those who would speak of ‘minus-one formula’ for Nawaz Sharif should see how people of Pakistan have reversed the narrative in favour of the PML-N leader.

“Those taking about the minus formula should see how Nawaz Sharif is becoming a plus, plus and plus with every passing day,” she quipped, while addressing a public meeting in Dhirkot. “Nawaz Sharif’s name is echoing everywhere, from Dheerkot to Neelum Valley.” she claimed. “I’m glad that Nawaz Sharif’s sacrifices have borne fruit and have not gone to waste,” she observed. “I can safely declare that this is a revolution as people have converged here in large numbers and Nawaz Sharif has clearly won and his enemy has been defeated,” she said. “Nawaz Sharif is now a shining beacon in the land. You are the one who is a setting sun, along with the ones you would say are on the same page as you. The same page you would speak of has turned into a shame page,” she added.

Maryam said the PML-N campaign was so strong that Imran Khan had to personally pay AJK a visit. “He (the prime minister) thought of initiating his campaign from Bagh to match the popularity of the PML-N,” she said.

Maryam claimed that Prime Minister Imran Khan plans on making Azad Jammu and Kashmir (AJK) a new province of Pakistan, insisting that ‘a decision has already been taken in this regard’. She said Imran Khan wants to bring a ‘puppet PM’ to power in Kashmir in order to impose his decisions on people but warned that the PML-N will not allow this.

She also lambasted the government over its much used slogan of bringing “Tabdeeli” (change) to Pakistan, saying any change the government actually ended up bringing was “destruction”. She alleged that the prime minister’s rally in AJK yesterday was organised through taxpayers’ money.