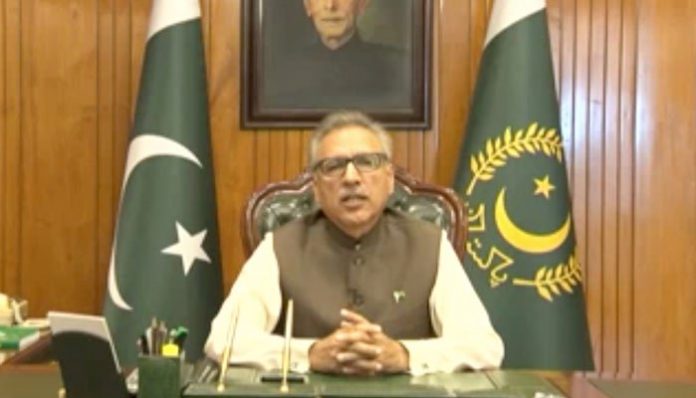 ISLAMABAD: President Dr Arif Alvi on Tuesday said with the best mango produce in the world, Pakistan had the potential to make a bigger export footprint of the “King of Fruits” by adopting proper agrarian techniques.

“Introduction of mango’s new varieties through research, quality control, and value addition can help Pakistan earn high revenues in the international markets,” the president said in his address at the Mango Festival here at the Aiwan-e-Sadr.

The Mango Festival was organized by the Rahim Yar Khan Chamber of Commerce and Industries, and the Ministry of Commerce that showcased a wide assortment of local mangoes, ranging from the well-known varieties like Chaunsa, Sindhri, Dusehri, and Anwar Ratol to the less known Coconut Ambri, Surkha Gulab and Samar Bahisht.

President Alvi said Pakistan’s sweet mangoes could no doubt be presented before the world with great pride and mentioned in that regard his ‘mango diplomacy’ under which he had sent them gifts of mangoes to the rulers, presidents, and prime ministers of different countries.

The mango gifts were sent to 37 countries this year, and to 17 last year, he added.

The president stressed that Pakistan needed to take measures in the quality presentation of food products to boost exports.

To check the wastage of perishable fruits, proper pest control techniques should be used before their transportation to the local and international markets, he added.

Converting mangoes into pulp without the use of preservatives could be a good idea to preserve the fruit for local use and export purpose, he added.

He said the promotion of the agricultural sector was also important to ensure food security, which could be an impending challenge in the coming times.

Dr Alvi said to facilitate the traders, the government had taken effective steps such as ease of doing business, digitalization of business modes, grant of soft loans, and offering entrepreneurship opportunities for women.

As regards the looming fourth wave of COVID-19, the president advised the masses to continue adhering to the precautionary measures, particularly the use of face masks.

“I appeal to you that help Pakistan maintain its edge in overcoming the coronavirus during the previous waves of the virus,” he added.

President Alvi along with his wife Begum Samina Alvi visited the stalls, where traders from Multan, Bahawalpur, Khairpur, Jhang, Mirpur Khas, and Hyderabad had put on display varieties of their mangoes.

He said having an equal geographical distance to all the provincial capitals, Rahim Yar Khan’s growers were effectively transporting their produce to the rest of the country.

Parliamentary Secretary for Commerce Alia Hamza Malik said the agriculture sector as the main pillar of the national economy contributed 19.2 percent of the country’s gross domestic product and employed 38.5 percent of the workforce.

She said Pakistan’s mango market offered a promising outlook as the government was engaging all the stakeholders, and also had set up a Working Group on Mango Production with the involvement of farmers, growers, traders, and commerce chambers.

She mentioned that the Australian government had recently established two mango processing units in Pakistan for their export to Australia.
Former president of Rahim Yar Khan Chamber of Commerce and Industries Abdul Rao Mukhtar said of the total mango produce of 700,000 tonnes, Rahim Yar Khan alone produced 250,000 to 300,000 tonnes of the fruit.
He emphasized setting up a special Mango Zone with processing units, cold storage chain, air cargo service, and pulp-making section to avoid post-harvest loss.