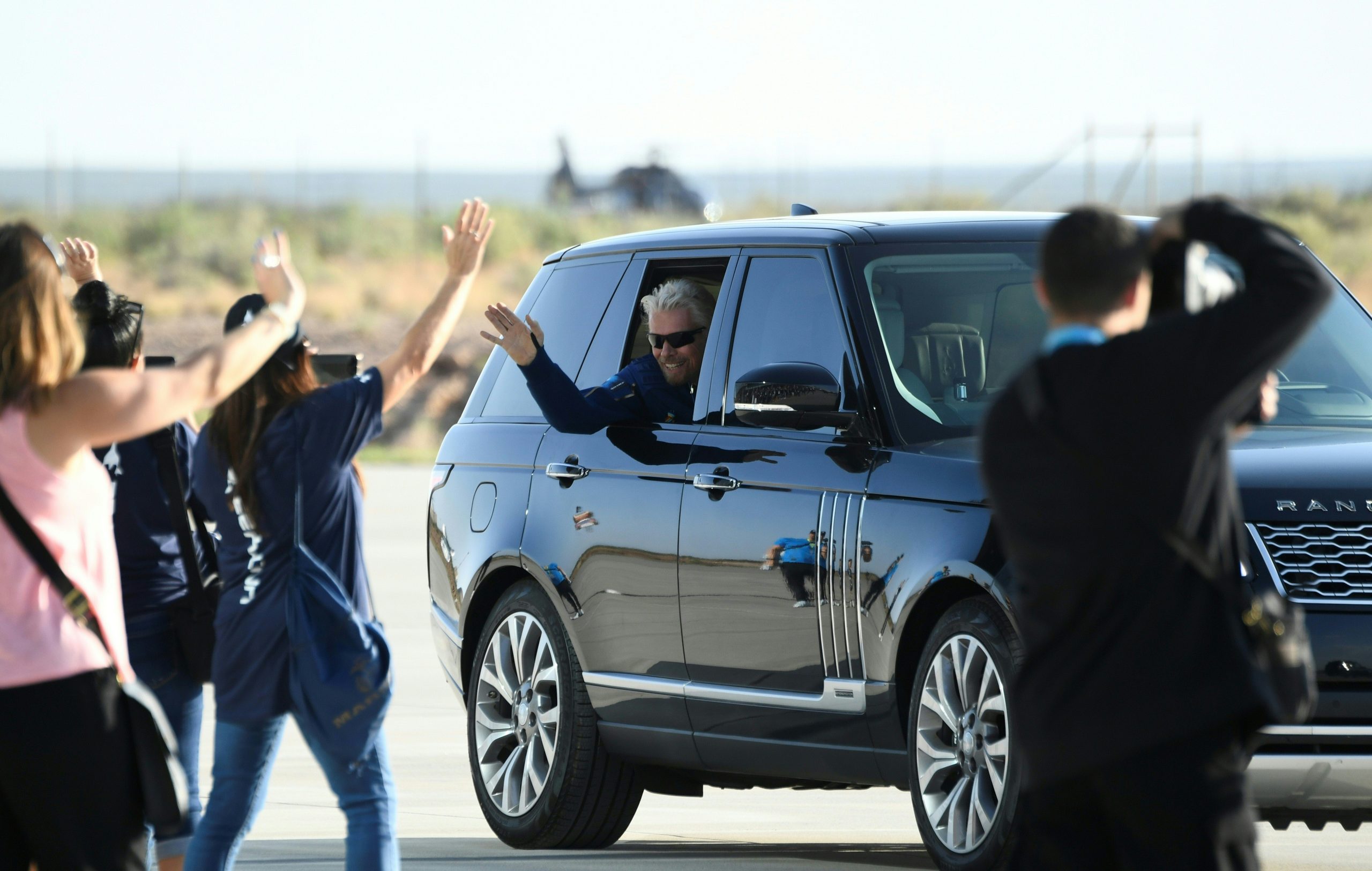 Billionaire Richard Branson was set to take off Sunday from a base in New Mexico aboard a Virgin Galactic vessel bound for the edge of space, a voyage he hopes will lift the nascent space tourism industry off the ground.

“It’s a beautiful day to go to space,” the brash Brit wrote in a tweet where he posted a video of himself biking to the base and meeting with his crewmates, all Virgin employees. Branson is also aiming to one up Amazon founder Jeff Bezos by winning the race to be the first tycoon to cross the final frontier in a ship built by their own company. Branson posted a picture of himself standing in a kitchen with SpaceX boss Elon Musk, who’d come to show his support.

“Great to start the morning with a friend. Feeling good, feeling excited, feeling ready,” he added. Several tourists journeyed to the International Space Station in the 2000s, but on Russian rockets. Branson’s official role is to evaluate the private astronaut experience to enhance the journey for future clients. The spaceflight should take place at 8:30 am Mountain Time (1430 GMT), after overnight weather conditions forced a 90-minute delay. Virgin Galactic is providing a livestream on its website. A massive carrier plane will take off from a runway, flown by two pilots, gaining altitude for about an hour. Below this plane hangs the spaceship VSS Unity — a SpaceShipTwo-class suborbital rocket-powered spaceplane — with two more pilots and the four passengers. After climbing to 50,000 feet (15 kilometers), VSS Unity, which is about the size of a private jet, will be dropped and then ignite its rocket-powered engine to ascend at Mach 3 beyond the 50 miles (80 kilometers) of altitude considered the edge of space by US agencies. Once the rocket engine is cut off, passengers can unbuckle and experience a few minutes of weightlessness, while admiring the curvature of Earth from the ship’s 17 windows. After peaking at around 55 miles of altitude, the ship will re-enter the thick part of the atmosphere and glide back to the runway.

Branson, who founded the Virgin Group that today has interests in everything from commercial aviation to fitness centers, is known for his appetite for adventure and has set world records in hot air ballooning and boating. “As a child, I wanted to go to space,” the 70-year-old wrote a few days ahead of his trip. The dream almost came to an end in 2014 when an in-flight accident of a Virgin Galactic vessel caused the death of a pilot, considerably delaying the program. Since then, VSS Unity has successfully reached space three times, in 2018, 2019 — which included the first crew member who wasn’t a pilot — and finally May this year. Sunday’s spaceflight takes off from Spaceport America, a huge base built in the Jornada del Muerto desert, around 20 miles southeast of the nearest dwelling, Truth or Consequences. Financed largely by the state of New Mexico, Virgin Galactic is the principal tenant.

After Sunday, Virgin Galactic plans two further flights, then the start of regular commercial operations from early 2022. The ultimate goal is to conduct 400 flights per year. Some 600 tickets have already been sold to people from 60 different countries — including Hollywood celebrities — for prices ranging from $200,000 to $250,000. And though, according to Branson, “space belongs to us all,” the opportunity for now remains the preserve of the privileged. “When we return, I will announce something very exciting to give more people the chance to become an astronaut,” he promised. The competition in the space tourism sector, whose imminent rise has been announced for years, has come to a head this month. Bezos, the richest person in the world, is due to fly on July 20 on Blue Origin’s New Shepard rocket. Blue Origin posted an infographic Friday boasting the ways in which the experience it offers is superior. The principal point: New Shepard climbs up to more than 60 miles in altitude, thus exceeding what is called the Karman line, the frontier of space according to international convention. Bezos himself wished Branson “best of luck” in an Instagram post the following day.