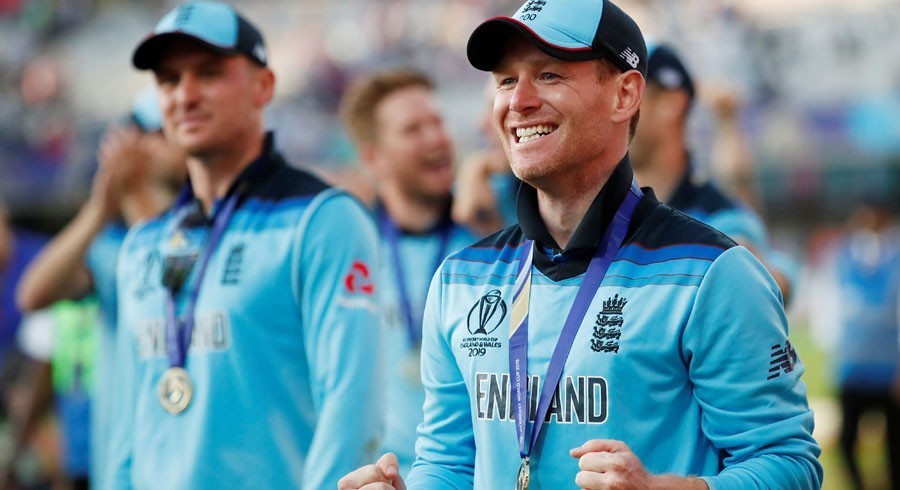 World Cup-winning skipper Morgan and all of England’s originally-selected squad for this three-match campaign had to self-isolate after three players and four support staff tested positive for Covid-19. Even so, a new England XI thrashed Pakistan by nine wickets in Cardiff on Thursday before, in front of 23,000 fans at the home of cricket, they went an unassailable 2-0 up. Lewis Gregory was named player of the match, the Somerset all-rounder making a valuable 40 to help take England to 247 after they had slumped to 160-7 before the paceman led the way with 3-44 as Pakistan were dismissed for 195. Phil Salt (60) and James Vince (56) were also in the runs, while wicketkeeper John Simpson, a longtime Middlesex team-mate of Morgan, held five catches, including a brilliant take down the legside. It prompted Morgan to hail stand-in skipper Ben Stokes’s side by tweeting: “15 of the current squad in isolation. (Jos) Buttler and (Jofra) Archer injured. “What Ben Stokes and the team have achieved is incredible. Looking forward to watching the next game!”

Meanwhile Gregory, aware his ODI chances may be limited, said: “To say you’ve played for your country at the home of cricket is a special moment and the crowd was fantastic. “But this England one-day team is difficult to break into. The guys who are in there are difficult to get ahead of. All we can do is put in a performance and put our hands up when the chance comes.” And having helped secure a trophy for a national side, Gregory hoped the England football team could do the same in Sunday’s European Championship final against Italy at Wembley. “We’re all going to get together and watch the game tomorrow,” he said. “Hopefully our last two games have kept the momentum going for English sport and they can finish the job.” Pakistan paceman Hasan Ali took 5-51 hit a defiant 31, including three sixes, but there was no denying another comprehensive defeat.”I am feeling proud. It’s an honour for me to get five wickets, but obviously I am disappointed because we lost the series in two games,” he said.