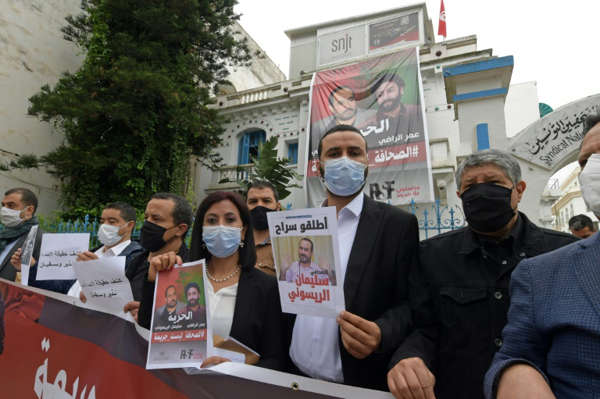 Detained Moroccan journalist Soulaimane Raissouni was sentenced on Friday to five years in jail for indecent assault against another man.

Raissouni, editor-in-chief of now-defunct newspaper Akhbar Al Yaoum, denies the charge and has been on a hunger strike for 93 days. He was not present in court for the sentencing. His supporters say the case is politically motivated and part of an official defamation campaign against critical journalists and activists. Morocco says its judiciary is independent. The 49-year-old has been in detention since May 2020 after an LGBT activist accused him of sexual assault. Raissouni began a hunger strike in April demanding to be provisionally released. But Moroccan courts have rejected all his release requests, despite a pressure campaign both locally and overseas. Earlier this week, the judge ordered Raissouni to appear in court to hear Friday’s verdict.

The journalist had said he would only come if he was transported there in an ambulance and provided a wheelchair. Miloud Kandil, his lawyer, termed the verdict “judicial butchery”. “How can you condemn an accused in his absence?” he said. Raissouni, who has a history of run-ins with the authorities, says he has lost more than 35 kilograms (77 pounds), much of it since he began his hunger strike over the “great injustice” of his detention. His trial began in February but has been delayed several times, including over health concerns. The last time Raissouni came to court, on June 10, he appeared skeletally thin. Human rights groups and press watchdogs have called for his release, while activists have accused the Moroccan government of trying to silence journalists, mostly by using sex-related charges.

Raissouni’s niece, Hajar Raissouni, was a reporter at the same newspaper and was sentenced in 2019 to one year in prison for sex outside of marriage and an “illegal abortion” before she was pardoned by King Mohammed VI. Another journalist, Omar Radi, has been held in solitary confinement on charges of sexual assault and undermining state security, according to the Committee to Protect Journalists (CPJ). CPJ data show four journalists have been imprisoned in Morocco as of December 2020, three on sex crimes.