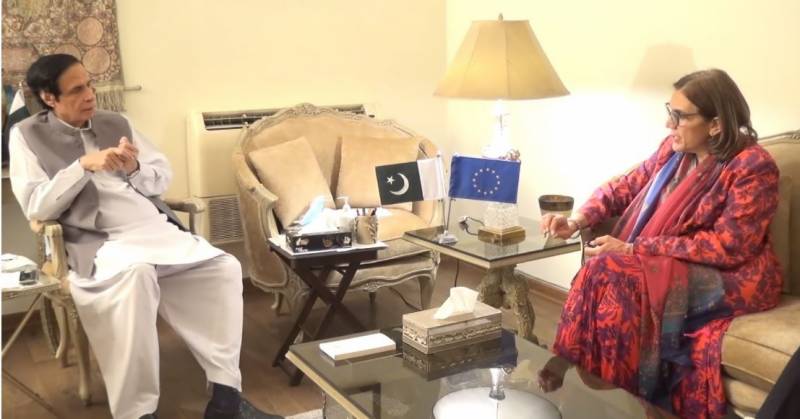 The European Union (EU) Ambassador to Pakistan Androulla Kaminara called on Punjab Assembly Speaker Parvez Elahi and discussed matters of mutual interest while emphasizing the need to increase trade ties between both sides.

The EU top envoy said that Pakistan was an important country in terms of trade and the EU wanted to excel bilateral relations with Pakistan.

Chaudhry Parvez Elahi said that the bilateral relations between EU and Pakistan would strengthen with exchange visits of parliamentary delegations of both the countries.

Parvez Elahi said that textiles play a vital role in Pakistan’s exports to European countries which is in fact 75.2 percent of Pakistan’s total exports in 2020. On the other hand, Pakistan’s imports from the EU mainly consist of machinery and transport equipment 33.5 percent and chemicals 22.2 percent in 2020.

He also highlighted India’s grave human rights violations in Occupied Kashmir and said that Kashmir was the bone of contention between Pakistan and India and urged the EU to play its role in resolution of the dispute. “Pakistan wants peaceful resolution of the Kashmir dispute while civilian and military leadership along with Pakistani nation is united on the Kashmir dispute,” the Punjab Assembly speaker said.

Sharing Punjab Assembly feats, Parvez Elahi said that Punjab Assembly passed a record of 90 bills. He said that the government was also taking steps on investment, economy, tourism and provision of medical facilities.

Parvez Elahi also said that as a Chief Minister of Punjab, his party established the Ministry of Minority Affairs for the first time in history and allocated funds for it and also gave property ownership rights to slum dwellers.