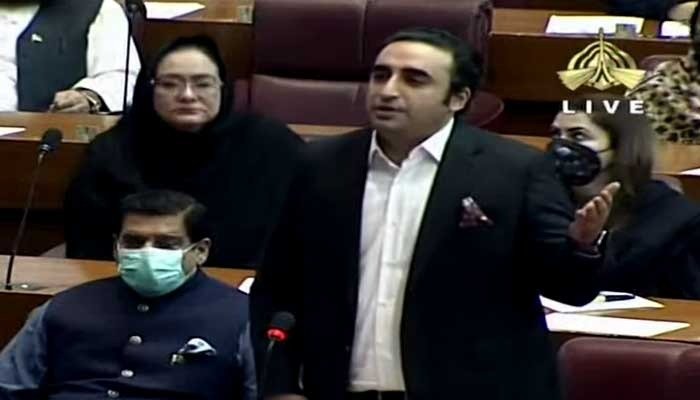 The PPP chairperson left the House after lambasting the government over the provisions of budget 2021-22 and condemning the legislative process conducted on Tuesday.

“I would like to ask Bilawal Bhutto to return to his seat; come back to the field and listen to us now,” the foreign minister stated.

The Opposition benches in the National Assembly broke into huge applause when the PPP chairperson, with another lawmaker by his side, returned to his seat.

Shah Mahmood Qureshi on Wednesday responded to PPP Chairman Bilawal Bhutto Zardari’s criticism by saying that he knows Bilawal since he was a child and that the PPP supremo still has a lot to learn.

The foreign minister said that he never knew Bilawal would get upset by his speech.

Qureshi was of the view that Bilawal has no right to teach parliamentary manners to the ruling party when his own government in Sindh doesn’t even give the opposition leader enough time to speak and voice his grievances.

The minister maintained that the Charter of Democracy clearly states that the opposition leader should head the Public Accounts Committee but PPP government in Sindh violated the same principle.

The PPP chairman had alleged that Shah Mahmood Qureshi was reported as FM during the PPP government tenure as he was doing a campaign to be the premier.

“He called leadership of foreign countries and urged them to help him in making prime minister.”

During his speech in the Parliament today, the PPP chairperson lashed out at the government’s legislative process, accusing it of conducting massive rigging.

“If the government can’t protect our (opposition) votes, how can we expect it to give respect to the votes of the general masses,” he added.

He said if “rigging” had not been carried out yesterday when the finance bill was being approved, the government would not have been able to obtain 172 votes. Bilawal said that the Opposition asked for a recount of the votes but the demand was not obliged.

“We think that this budget session has become a source of embarrassment for every Pakistani,” he said. “Mr Speaker, I complain to you that you have snatched our rights from us,” added Bhutto.

“According to Rule 276, if there is a voice vote challenge, you have to count it,” said Bhutto.

“What else is it, if not rigging?” the PPP leader asked before concluding his speech, leaving and then returning when the foreign minister challenged him to come back.

“We sit with you and reach agreements time and again but no attention is paid towards them,” he complained.

The former prime minister told the speaker that the National Assembly “runs according to the rules, not your wishes”.

The government had been able to pass the budget with a majority when many PML-N members were absent from the House.

According to the state-run APP, 240 lawmakers had participated in the debate on the federal budget.

The motion was passed with majority vote which led to the passage of Finance Bill, 2021 after clause by clause reading as well as voice voting along with amendments.