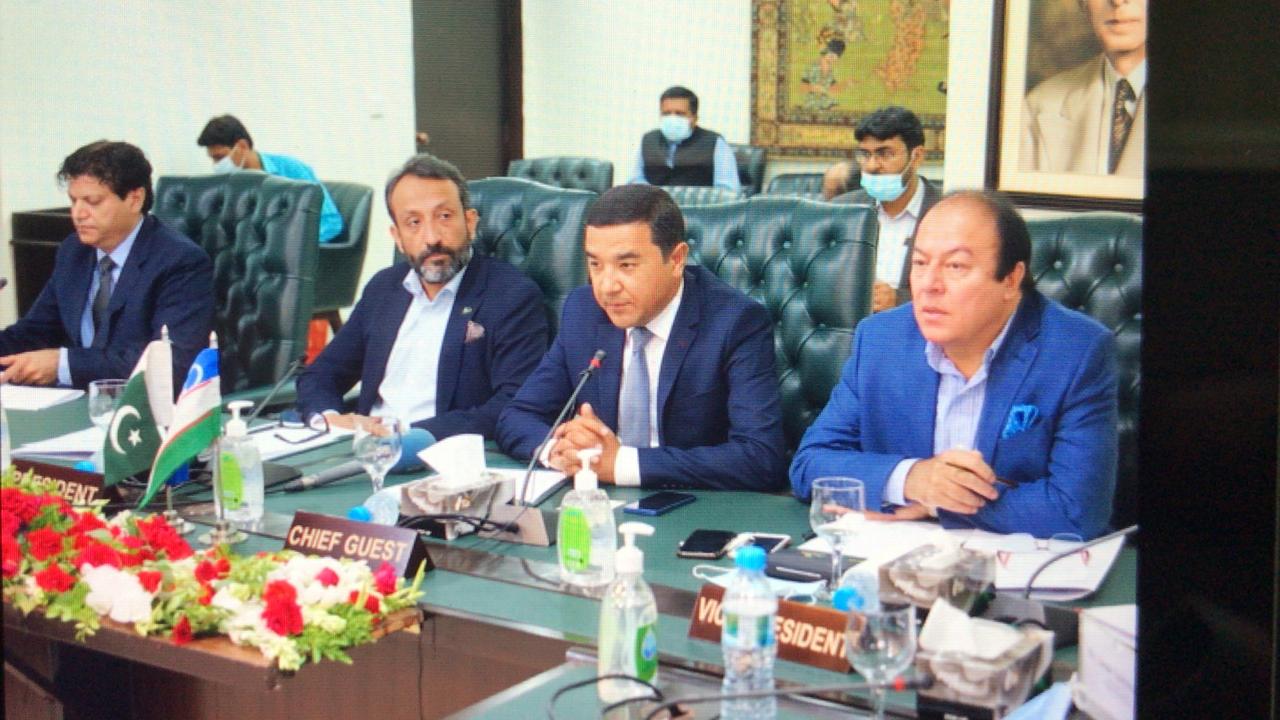 He was speaking at the Lahore Chamber of Commerce & Industry. The LCCI President Mian Tariq Misbah presented the address of welcome while Vice President Tahir Manzoor Chaudhry also spoke on the occasion.

The Deputy Governor said that Uzbekistan is keen to enhance trade relations with Pakistan as both countries have great potential to cooperate with each other in many areas of economy.

He invited the Lahore Chamber of Commerce & Industry to form a sector-specific delegation for Uzbekistan.

He said that the role of LCCI holds importance for B2B contacts between the two countries. He lauded the hospitality of Pakistan saying that visiting this great country was a right decision.

LCCI President Mian Tariq Misbah informed the delegation that LCCI is the premier business support organization of Pakistan with a diverse membership base that exceeds 29,000.

Whenever the foreign trade missions visit Pakistan, they also grace LCCI with their visit.

He hoped that the visit of Government Officials and private sector representatives from Namangan Region, that is the eastern part of Uzbekistan, will initiate a new era of close cooperation between two countries.

He said that the Government of Uzbekistan deserves appreciation for sending this high profile delegation to Pakistan in continuation of a virtual summit held between the Prime Minister of Pakistan, Imran Khan and the President of Uzbekistan Shavkat Mirziyoyev in April this year. During this summit, multiple MoUs were signed and both countries agreed to reinforce ties in a number of sectors.

There is a great potential for both countries to enhance trade and economic relations through Joint Ventures in Textiles, Pharmaceuticals, Construction, Renewable Energy, Tourism and Automotive Parts.

Mian Tariq Misbah said that absence of banking Channel, difficulties in land route and communication are some of the major bottlenecks behind low trade volume.

Lahore Chamber has also participated in sessions arranged in connection with the Preferential Trade Agreement (PTA) with Uzbekistan. Hopefully, this PTA will open new avenues of economic cooperation between two countries.

He informed the delegation that the Lahore Chamber maintains close working relations with embassies of Central Asian Republics and their ambassadors regularly visit us to discuss new avenues for enhancing trade.

“We are hoping that Trans-Afghan Railway Line Project agreed among Pakistan, Uzbekistan, and Afghanistan will play a key role in linking up the Central Asian transport network with Pakistan’s seaports of Gwadar, Karachi, and Qasim”, the LCCI President added.

Mian Tariq Misbah said that the delegation will be arranged after keeping in view COVID situation.

“We have already visited Uzbekistan which was successful and are keen to visit that region again”, he added.

LCCI Vice President Tahir Manzoor Chaudhry said that the LCCI has always emphasized on the exchange of trade delegations. The formal introduction of delegates after formal speeches will allow us to know the specific business areas of the honorable delegates. Let’s make best use of each other’s potential areas and create a win-win situation for both the countries.