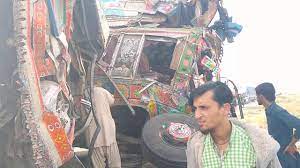 HUB: Two women killed in a collision between a passenger coach and crane on Thursday. The crash occurred in Hub and as a result two women were killed whereas ten passengers were injured.

The injured along with the bodies were moved to the nearby hospital.

According to the initial reports the cause of the accident is still unknown.

In another road crash on April 21, around twenty people got injured in Khairpur whereas 12 lost their lives.

The incident occurred on Khairpur’s Old National Highway after a bus collided with a van.

The deceased along with the rescued passengers were taken to Civil hospital, where emergency was declared shortly after the accident.