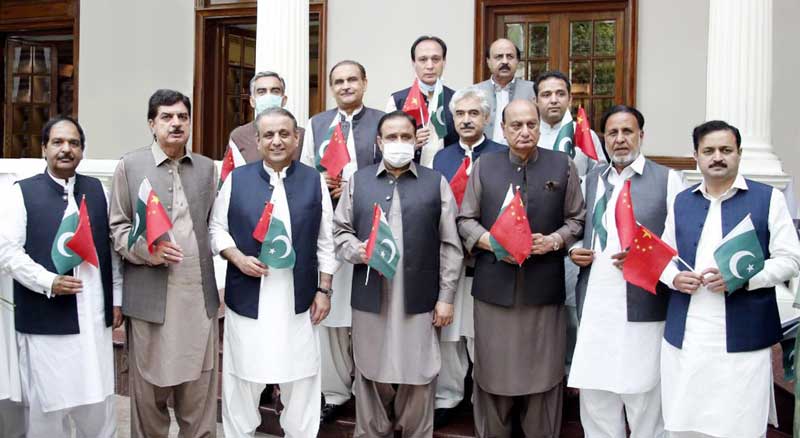 Chief Minister Punjab Sardar Usman Buzdar has said that Pakistan and China enjoy enviable diplomatic relations and these relations stood every test of time over the past seven decades.

Holding flags of both the countries in their hands during the ceremony, Chief Minister Punjab Sardar Usman Buzdar and the provincial ministers expressed their immense pleasure over this long journey of friendship between the people of the two countries and prayed for the longevity of the diplomatic relations. The participants raised slogans ‘Long Live Pak-China Friendship’.

Buzdar, speaking on the occasion, said the 10 years of diplomatic bond was a tale of mutual love, respect and sincerity between the two countries, adding that both the countries enjoyed unparalleled relations.

He said innovation, research and hard work were the secret of China’s progress, adding that Pakistan is lucky to have a friend in China.

He said the Chinese model teaches a lesson of hard work to the Pakistani nation and this lesson must be passed on to the next generations, adding that hard work was the only royal road to progress and prosperity.

Chief Minister Punjab Sardar Usman Buzdar said that this strong bond of diplomatic relations between the two countries will be taken forward with renewed zeal and commitment.

Provincial Minister Culture Khayal Ahmad Kastro, speaking during the ceremony, said ceremonies were being held across the province to commemorate 70 years of diplomatic relations between Pakistan and China, adding that Pakistan enjoys strong cultural, diplomatic and friendly ties with China.

He said various cultural ceremonies will be held in the provincial metropolis to mark the historic occasion in the diplomatic history of the country.