When change became inevitable in Pakistan 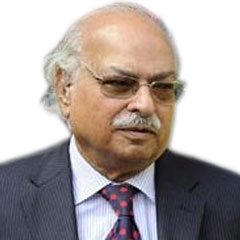 As the date for the Elections 2007 got nearer panic and desperation were overwhelmingly getting hold of the Musharraf regime. With Americans blowing hot air down the dictator’s neck for what they call not doing enough to crusade against the Islamic terrorists, there is a growing considered view in the West that democracy after all is the best bet for Pakistan and to fight terrorism. Besides, it is also sine qua non for stability and democracy in strife-torn neighbouring Afghanistan.

Coming together of the he two former Prime Ministers Benazir Bhutto and Muhammad Nawaz Sharif to join hands on what came to be “now or never” battle to save Pakistan from becoming a failed state. In their meetings the two major political parties and their leaders would lay down a code of conduct and a charter of democracy for slamming doors permanently on extra-constitutional military interventions and sowing the seeds of an irreplaceable democratic culture of tolerance and peaceful co-existence for making civil society invincible.

To avert that eventuality forecast as inevitable even by his intelligence apparatus, his administration left no stone unturned, to come up with Bhutto specific laws to keep her out of the one-sided electoral race. The joke then doing the rounds in Islamabad’s corridors of power was that his desperate advisors had resorted to every dirty trick short of banning any person bearing the name Benazir Bhutto from contesting the elections. Though the “boss” would have welcomed it as an ideal solution, there were few with some iota of sanity in them who prevailed and restrained from going to that extreme that would have blackened the face of the country.

Besides banning Benazir Bhutto from participation in polls, the Musharraf regime stooped to the lowest when the early count indicator was a landslide for her party. Results were delayed and changed most crudely during the dark of the night to convert her overwhelming sweep into a minor edge over others though the final count showed her party having secured the largest number of votes despite massive rigging.  So blatant was the operation that when the cat seemed running out of his beg especially when a television anchorman telecast the vote count showing massive support to PPP, from the correspondents present on the spot at various election offices, his spooks got him out from his studio in the midst of the programme to teach him a “lesson” for speaking the truth.

Manipulation of results during the night and the following day did change the complexion of the situation yet he could not rob PPP from being the single largest party. He was in no position to form the government while PPP remained the single largest party. Being a past master in the game of deception, he let loose plethora of media disinformation that he was trying to strike a deal with Bhutto while he had unleashed NAB hounds to dig in the files of those PPP stalwarts who had corruption cases against them with least grit to resist government’s pressure. NAB took time to break them up; hence there was a long delay in the formation of the government. His political wheeling-dealing to deny PPP its legitimate claim to power demolished that iron curtain behind which he had hid the foul face of his regime from the civilised world.

Throughout he played the game of running with the West while hunting with the Mullas; it has taken nearly five years to dawn on his Western supporters that they had been taken for a ride by him by his blackmail of them by blowing the Islamist mole in Pakistan to the height of unclimable mountain.  His chicanery now stands exposed both in Washington and London. There is a growing realisation that he is not the solution of the Islamist terrorist problem but part of it and that if they have to have democracy and stability in Afghanistan; they will have to have it in Pakistan too.

Without undermining the recent analytical reports by prestigious Western think tanks that have singled him out as the villain of the piece, one would like to refer here to the op-ed in the Wall Street Journal (May 10). Writing under the caption, “What ails Afghanistan?” Lord Patten, former EU Commissioner and Chancellor of the Oxford University, has forcefully and candidly, made a case for applying full throttled pressure on General Musharraf for the restoration of democracy in Pakistan. He is earnestly convinced that, “Afghanistan will never be stable unless Pakistan’s military government is replaced with a democracy.”

Lord Patten’s indictment of the General calls for intense reflection in Washington and London. He says: “One needs only to look at the military’s close relations with religious radicals to understand how unreliable a partner it is in stabilizing Afghanistan. Militant Islamist groups that Mr. Musharraf banned under the international spotlight following 9/11 and the 7/7 London bombings still operate freely. Jihadi organizations have been allowed to dominate relief efforts in the aftermath of the October 2005 earthquake. The military has repeatedly rigged elections, including the 2002 polls, to benefit the religious parties over their moderate, democratic alternatives. In short, Pakistan is ruled by a military dictatorship in cahoots with violent Islamist extremists. The military has no interest in democracy at home, so why does the outside world expect it to help build democracy next door?

”If we are really going to get to the core of Afghanistan’s instability, therefore, we must tackle Pakistan. Above all, this means returning the country to democratic rule. After seven years under the military, this is not an easy task, but some institutions are still surviving — just. The judiciary, for example, has been badly degraded under Mr. Musharraf and his army colleagues; but there is enough left to give hope for some kind of gradual resuscitation.

”Moderate political parties are also struggling to hang on; down but not yet out, they could recover relatively quickly if given a democratic chance. Pro-dictatorship voices regularly argue that those parties were highly corrupt and that it was their corruption that justified the 1999 coup that brought Gen. Musharraf to power. But they refuse to condemn or even acknowledge the military’s large-scale, institutionalized corruption.

According to Lord Patten–”So much has been grabbed by the military that it will take years just to catalogue it. The military has acquired vast tracts of state-owned land at nominal rates; its leaders dominate businesses and industries, ranging from banking to cereal factories. Their control of the economy has grown so great it will present an enormous challenge to any future democratically elected government.

”That civilian government, when it comes, will also be moderate in character and far more inclined to tackle, in earnest, the scourge of Islamic radicalism. Even in the rigged 2002 election, the religious parties polled only 11% of the vote. A fully free and fair race will squeeze out radical forces that have thrived under military rule and which play havoc with Pakistan’s weak neighbour to the northwest. In addition, unlike the military, which always thrives in a hostile environment, a civilian government will have a stronger interest in peace with India. And who wouldn’t sleep safer knowing that Pakistan’s nuclear bomb was in democratic hands?

”Democratic governance would also bring a much-needed opportunity to overhaul the country’s education system. As the state system has consistently failed young people for decades, madrassas have taken up the slack, with the most extreme religious schools helping to radicalize tens of thousands of Pakistanis — and Afghans — filling heads with intolerant visions of Islam, far from the mainstream of South Asian Muslim society. The country needs a properly funded, state-run, secular education system.”

Lord Patten’s conclusion is very clear and puts forth what Western agenda for Pakistan needs to be. He believes, “Bringing all this about is an enormous task, but demilitarizing and deradicalizing Pakistan is truly the key to bringing about stability in Afghanistan and the wider region. Governments now working so hard to support Afghanistan will only be spinning their wheels until they make Pakistan a top priority and apply maximum pressure on Islamabad to ensure the 2007 elections are actually free and fair, by applying clearly defined benchmarks and insisting on competent international observers. As long as the military and the madrassas rule just across the border, Afghanistan will never find peace.” Lord Patten’s is a powerful voice that is heeded to in Washington, London and other important capitals in the world. It carries a lot of weight in the right quarters. Read in line with earlier important think tank analytical reports that time has come for the West, especially the Americans, to withdraw support from the Pakistani tin pot dictator and support restoration of democracy—would suffice to explain the panic in General Musharraf’s responses to the growing threats of extinction to his rule.

Desperation is writ large in the shoddy way he has activated his NAB hounds to undermine and surreptitiously malign the former Prime Minister Benazir Bhutto both within and outside Pakistan when 2007 elections are around the corner. The forecast by the independent analysts and non-wired pollsters that Ms Bhutto in free, fair and transparent elections would comfortably romp home with a sweeping majority is responsible for sleepless nights in his camp. And in the worst case scenario, they know a respectable simple majority cannot be denied to her. That is the reason the General and his team mates are doing over time and spending tax-payers money as if it is going out of fashion, to block Ms Bhutto’s return to Pakistan and her participation in polls.

When his blood thirsty NAB hounds got chilled out in Switzerland’s cold by the fact that all the witnesses vouched Ms Bhutto’s innocence and a Swiss decision in her favour seemed imminent to them, to justify their enormously pyrrhic burden on the national exchequer they are at their dirty best now to get her convicted, by hook or by crook in Pakistan. Not only that, they have also found a unique way of putting pressure on Swiss government as well—that is—through outright blackmail. Through their agents they have trapped some members of the Swiss embassy staff in a contrived visa scandal and are now arm twisting it to blackmail it into forcing it to adopt a hostile treatment of Ms Bhutto and her husband ex-Senator Asif Zardari.

Having lost its face in proving the piled up plethora of concocted corruption charges against her within and outside Pakistan during the last seven years, the NAB now is resorting to abuse of Pakistani judiciary. Latest in the “get Bhutto” operation is the NAB initiated charade against Ms Bhutto through a pliable lower court proceeding. It claims that it has started a fresh inquiry against the former Prime Minister Bhutto for allegedly mis-declaring her assets before the Chief Election Commissioner in 2002 polls. This is yet another outrageous attempt to tarnish the public image of the country’s most popular leader with an unrivalled international standing.

Pakistani legal fraternity has described the NAB move as grossly high-handed and violative of human rights. The question that has been raised is if Ms Bhutto has mis-declared assets before the CEC as is alleged by the NAB petition, then it is for the Chief Election Commissioner to give notice to her and seek her comments and not a Sessions judge. It is strange that the NAB should go in complaint to the Sessions Judge and even stranger that the Sessions Judge should promptly issue summons. The very nature of one-sided proceedings and extra-ordinary promptness shown by the Sessions Judge without even ascertaining his jurisdiction exposes his pliability and NAB’s mala fide intentions. Ex-Senator Farhatullah Babar has put the record straight and is absolutely right in dismissing the latest NAB move as “nothing but a continuation of the most shameless abuse of judicial process that the regime has been resorting to for achieving its political agenda.