Day 3: the fight goes on in NA 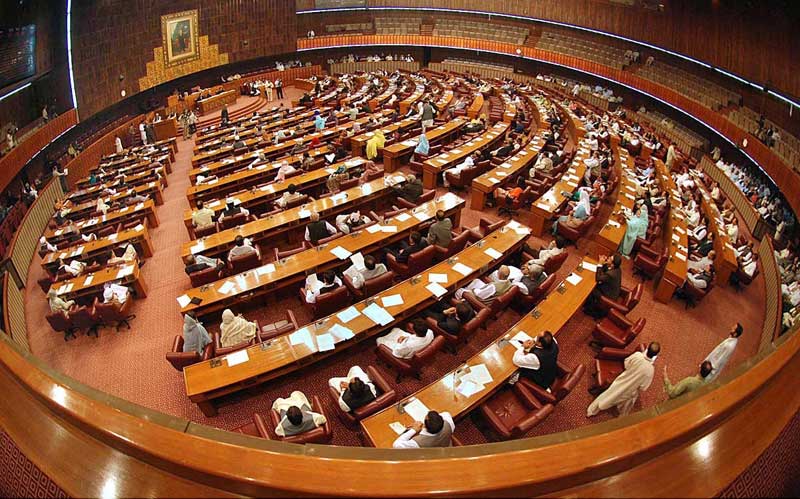 Commotion by lawmakers continued in the Lower House for the third day running and Leader of the Opposition Shahbaz Sharif failed to deliver his budget speech for the third time despite being surrounded by sergeants-at-arms.

National Assembly Speaker Asad Qaiser adjourned the assembly minutes after it started as treasury members continued their protest for the third consecutive day to disrupt Shehbaz Sharif’s budget speech. Shahbaz made several attempts to deliver his speech but did not succeed as members from the treasury benches continued to disrupt him, despite NA Speaker Asad Qaiser’s repeated warnings and directives to maintain order in the house. There were three attempts made by the speaker to conduct proceedings, with the session put into recess twice, before finally being put off for a third time in the day.

Earlier, Speaker Asad Qaiser repeatedly called on the parliamentarians to be seated, but eventually adjourned the session after an object was thrown at the speaker’s dais. He ordered for whoever had thrown the object to be escorted from the House and said he would take action against the individual responsible.

“I will not conduct this House (NA) until both the government and the opposition [settle their matters],” said Qaiser before walking out, adjourning the session till Thursday.

The speaker, before putting off the proceedings for the first time, said that the events that had transpired on June 15 were unfortunate and that he would not continue the session until the lawmakers sorted out their differences. “Action has been taken against lawmakers who had used indecent language in the house on June 15 […] a parliamentary committee will be formed to probe the matter further,” he said.

The committee will comprise of six members each from the treasury and opposition benches, the speaker announced, before he delayed the session for the first time as lawmakers continued to disrupt Shahhaz’s speech. After 15 minutes, the session resumed and Shahbaz spoke for a while, slamming Prime Minister Imran Khan for “ordering lawmakers to use indecent language” in the NA. As he delivered his address, the treasury benches started to hurl abuse at him, with the speaker repeatedly asking them to maintain decorum in the house.

Tuesday’s proceedings in the NA were one of the “darkest days” in Pakistan, Shahbaz said, adding he could not repeat the words that the members from the treasury benches had uttered. “Mr Speaker, it was your duty to maintain order and prevent such an incident from happening […] even today they haven’t stopped,” he said.

While the PML-N president leader was speaking, an opposition member threw a bottle at the treasury benches, which according to Federal Minister for Planning and Development Asad Umar, hit and injured Akram Cheema.

The speaker asked the sergeants to show the door to the rowdy member and postponed the session.

When the session resumed for a second time, the chaos did too. As it became apparent the uproar has no signs of letting up, the speaker postponed the proceedings for the day. “We will not resume the session until we arrive at an understanding on how it is we wish to proceed,” he said.

Earlier in the day, the NA speaker had barred seven MNAs, including three from the PTI, from entering the House after budget books and expletives were thrown during yesterday’s session.

Ali Gohar Khan (PML-N), Chaudhary Hamid Hameed (PML-N), Sheikh Rohale Asghar (PML-N), Faheem Khan (PTI), Abdul Majeed Khan (PTI), Ali Nawaz Awan (PTI) and Syed Agha Rafiullah (PPP) were told to not enter the precinct of the Parliament House till further orders. A separate statement issued by the NA Secretariat said that the ban on the MNAs would last until further orders. “The NA Secretariat has issued instructions to the concerned MNAs and to the assembly security,” it said.

Earlier in the day, the speaker met Prime Minister Imran Khan during which the country’s political situation and the ruckus during yesterday’s session came under discussion. He added that the premier was informed about the incident, adding that those who had violated the sanctity of the House would be punished.

The NA speaker also telephoned Shehbaz and PPP Chairperson Bilawal Bhutto-Zardari and exchanged views on keeping the environment in the House ‘pleasant’ during the budget sessions, according to a statement by the NA Secretariat.

During the call, Qaiser said that Tuesday’s ruckus in the Parliament was ‘saddening’, stressing that keeping the environment pleasant was the joint responsibility of the government and the opposition. He asked the parliamentary leaders of all parties to play their role in this regard, the statement added.

Shehbaz and Bilawal agreed with the NA speaker and assured him of cooperation in keeping the parliament’s environment peaceful, according to the statement.