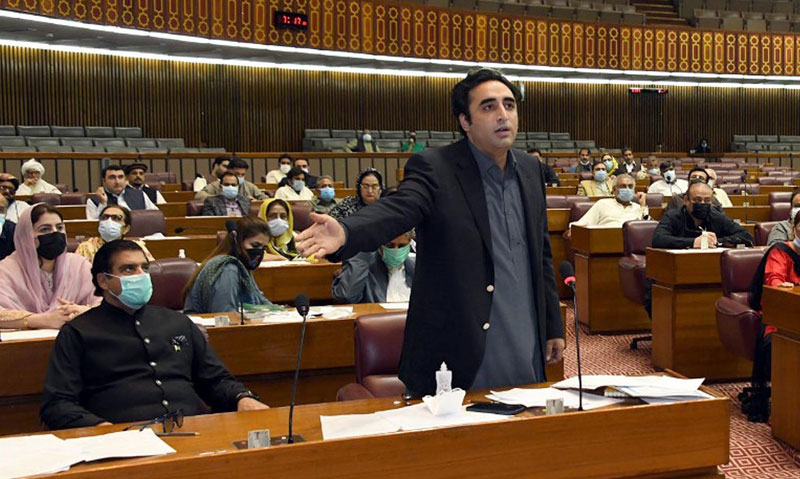 In a heated debate in National Assembly (NA) on Monday over Ghotki train accident which claimed over 50 lives and around 100 injured,the treasury and opposition lawmakers kept levelling allegations on each other, for the incident.

The NA session resumed under the chairmanship of Deputy Speaker Qasim Khan Suri. The chair, after announcing the point of order in the house, gave the floor to Pakistan Muslim League-Nawaz (PML-N) leader Ahsan Iqbal. The Pml-n leader began his speech by condoling the incident while saying that “it’s a big national tragedy.”

Iqbal, lamenting the government, said that instead of making some comprehensive measures to avert such incidents in the country, the incumbent is merely putting the blame game on the previous government.

“When development of Pakistan Railway would be cut down from Rs 43Billion annul to Rs 16 Billion annual, how is it possible to improve Railway overall,” he questioned, adding that occurrence of such incidents is not much surprising.

Opposition members demanded the government to inform the house on whether the investigation is made to determine responsibility for the regrettable incident.

But, when the speaker called upon Federal Minister for information Fawad Chaudhry to clarify the treasury position, he resorted to criticising the opposition, particularly PML-N. The answer was already being expected by the opposition from treasury benches, Chauhdry said and noted that “all such incidents occurred due to bad performance of the PML-N government which did not upgrade the railway system”.

Soon after he lashed out at the previous government’s policies, opposition members from both PML-N and PPP began protesting. The house echoed by the slogans and ruckus due to which the minister’s speech was inaudible from the galleries.

Opposition members, mainly, demanded to seek an accurate answer over the said incident instead of diverting the debate to unnecessary criticism. They asked the speaker to disrupt Chaudhry, however, the speaker paid no heed to the opposition’s demands and let Chaudhry continue his speech.

During one hour and 10 minutes of the noisy speech of the Information Minister, the opposition continued to chant slogans against and shouted at the government.

Chaudhry informed the house about the initial investigation findings and said that “1,388 passengers were on board both trains.” adding that the probe into the incident was underway and necessary tools have been dispatched for repairing the railway tracks.

“Had the past government invested capital in Orange Line Trains, we would not have to face such a tragic incident, the people who ruled this country did not let any institution prosper,” he lashed at the PML-N government.

He further said they (opposition) were making faces like they were unaware of why the incident had occurred. “The people involved in the downfall of the railways will not tell us how to revive it.”

He also recalled that from 2008-18, political appointments which took place in public institutions which led to their downfall and left them almost non-operational-may it be railways or Pakistan Steel Mills, he noted.

During the session, the Quorum was pointed out twice by opposition lawmakers Sheikh Javed Hasnain of PML-N first and followed by Zahid Durani of JUI-F. However, in both counts it was found that a required number of members are present for the continuing course of proceedings.

PML-N legislators staged a walk out while boycotting the proceedings as they said the speaker is not giving them a chance for speech. Ahsan Iqbal went to speaker dais and requested for giving him the chance for speech but in vain which perturbed his party members.

They also showed reservations when the speaker gave the floor to PPP chairman Bilawa Bhutto twice, to which he said that “You are intentionally favouring Bhutto,” while addressing the speaker.

During his speech, Bilawal Bhutto berated the government over the Ghotki train accident and said PML-N and incumbent ministers are “paper tigers” who are politicking the issue. He said a tragic incident has occurred in Ghotki, and regretted that a poor person’s life is not safe during travel via the railways.

“They (government) do political point-scoring even when an incident like these happens,” he said, adding that he wants to convey a message to the affectees of the crash. “We stand with you and demand answers from the authorities,” he assured.

The PPP chairman also questioned why railway accidents were occurring repeatedly during this government’s tenure, and highlighted that the government had not answered the questions raised in this regard. “The PM, railway minister are not in the NA to answer why in 3 years of this government we’ve had more train accidents than any other government in the history of Pakistan. Shocked at the callous attitude of the government,” he concluded.