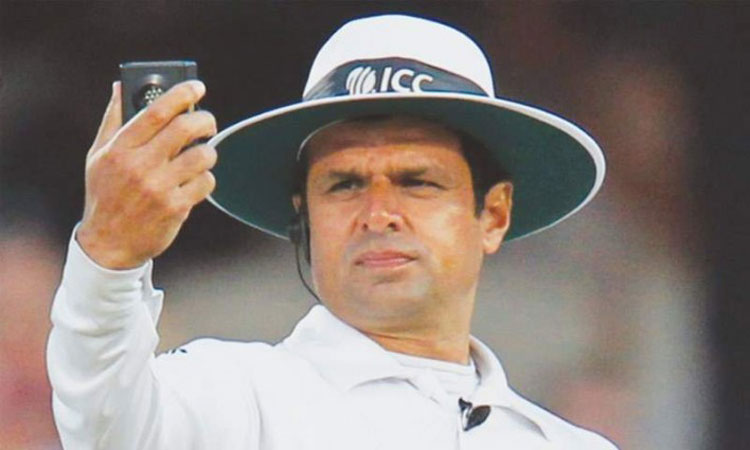 LAHORE: Pakistan and world’s best umpire Aleem Dar celebrates his birthday on Sunday (today). The star umpire, born on 6th June 1968, turns 53. As a middle-order batsman and legspinner, Dar’s playing career spanned a decade without ever really taking off, but that is in stark contrast to his umpiring. In 2000 he stood in his first ODI aged 32 and within two years he had been appointed to the International Cricket Council (ICC) panel. In 2003 he officiated in the World Cup, emerging with his reputation enhanced, and his Test debut followed in October of that year, immediately winning plaudits for making sounds decisions in tough matches in Bangladesh and Sri Lanka. It was not to anyone’s surprise when, six months later he was promoted to the ICC’s elite panel. Since then he has earned a reputation as one of the best. Dar is also one of only three umpires to have officiated in 200 ODIs. When Dar walked out to the middle at Lord’s for the second Ashes Test on Thursday, 15 August, 2019 it was his 128th Test match as an umpire. Only Steve Bucknor, whose career spanned from 1989 to 2009, has stood in as many matches. It was an especially poignant moment for Dar, who considers Bucknor his idol. Besides Dar and Bucknor, South Africa’s Rudi Koertzen is the only other umpire to have reached the three figure mark in Tests, having stood in 108 Tests before calling it quits in 2010.

Not only has Dar done a hat-trick of the ICC Umpire of the Year Award (from 2009 to 2011), he has also officiated in the most international matches. His ascent at the highest level was remarkable, more so because Pakistan has never been a great land when it comes to producing world-class umpires. If anything, from Idris Begh to Khizer Hayat to Shakoor Rana to Javed Akhtar to Asad Rauf, most of them have made headlines for all the wrong reasons. The complaints of overseas cricketers became so frequent that former captain Imran Khan had ensured neutral umpires in home Tests.

Dar’s career has been one of remarkable highs punctuated by rare lows. His consistent faultless performances, combined with a polite, jovial yet authoritative nature, makes him a favourite among cricketers. His greatest performances include faultless shows in the 2003 and 2011 World Cups (DRS was used in the second; Dar had a 15-0 clean sheet); the Brisbane Test of 2010-11 where he kept his calm and produced one correct decision after another; and the 2016 series between England and Sri Lanka — one where he beat DRS 10-0, including 8-0 at Chester-le-Street alone.

On the flip side, there were one-off incidents: the farcical last rites in the 2007 World Cup, not giving Stuart Broad out despite a clear edge in the 2013 Ashes, and calling a no-ball (that saved Rohit Sharma) in the 2015 World Cup quarter-final. In April 2007 he stood in the World Cup final, but the farcical finale of that match –– and his role in misinterpreting the rules regarding bad light –– led to his suspension for
the Twenty20 World Championships in September. The 2003 World Cup deserves special mention, for he lost his six-month-old daughter Javeria during the tournament. Noshaba Banu, his wife, hid the news from him to make sure her husband’s career was not hampered.

A spin-bowling all-rounder, Dar was spotted early by Imran Khan at the Islamia College trials. Dar kept playing club and office cricket long after he made his international debut as umpire. Dar featured in 17 first-class games in Pakistan during his playing days, taking 11 wickets with his leg-spin. He took to umpiring when he realised that he would never make it to the international side. He rose swiftly: he made his First-Class debut in 1999, ODI debut in 2000, and Test debut in 2002. By 2004 he was a part of the ICC Elite Panel. In 2011 he was awarded the President’s Award for Pride of Performance. In 2013 he opened the ‘Aleem Dar Cricket Academy’ where both boys and girl, all of them hearing-impaired, and are provided with free kits.