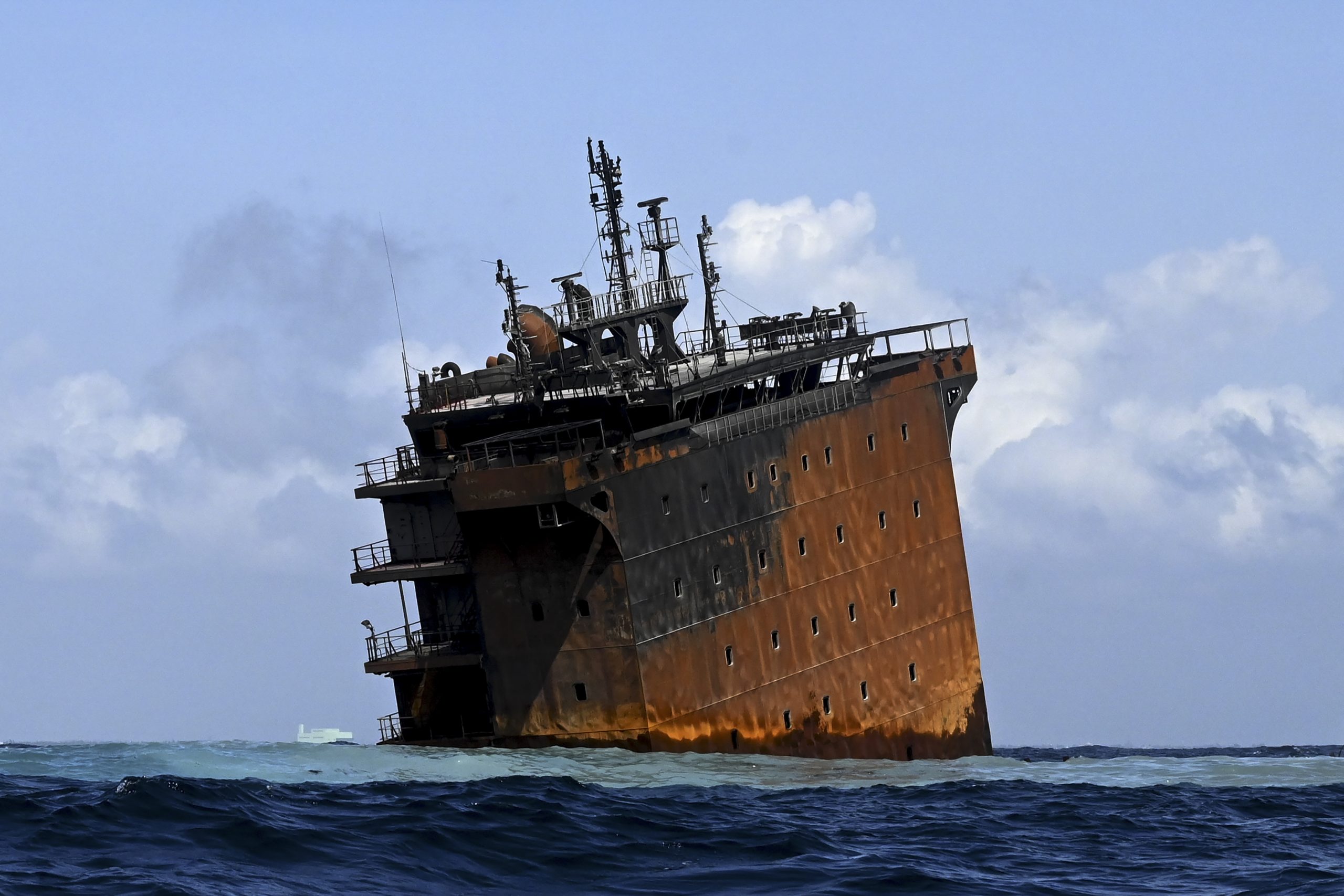 The Marine Environment Protection Authority readied oil dispersants and skimmers in case of a leak from the MV X-Press Pearl, which had 350 tonnes of fuel oil on board when it caught fire two weeks ago. The vessel, which burned for 13 days until Tuesday, has already caused the island’s worst maritime environmental disaster, littering beaches with tonnes of tiny plastic pellets. With the stern now on the sea bed and the bow slowly sinking, environmentalists fear an oil leak would cause even greater degradation to marine life. An Indian coastguard vessel in the area has equipment to deal with any oil slick, according to the Sri Lankan navy, which requested assistance with the operation. Sri Lanka’s Harbour Master Nirmal Silva said no oil had leaked in the past 36 hours. “Looking at the way the ship burnt, expert opinion is that bunker oil may have burnt out, but we are preparing for the worst-case scenario,” Silva said. Two-metre (six-feet) waves, rain and strong winds prevented salvage experts going on board to assess whether the ship could be refloated and moved further out to sea, he added. Alternatively it could be broken apart in the relatively shallow water.

Sri Lanka’s private Centre for Environmental Justice (CEJ) fears the disaster may also cause heavy metal pollution. The Singapore-registered vessel was carrying 81 containers of “dangerous cargo” including acids and lead ingots. “There is a chemical soup in that sea area,” CEJ executive director Hemantha Withanage told AFP. “The damage to the marine ecosystem is incalculable.” However, he said the silver lining was that there was no sign of an oil spill yet. Some oil was spotted near the beaches of Negombo, about 40 kilometres from Colombo, but the cause was not clear.

The escape of microplastic granules from the ship’s cargo has already forced a fishing ban and prompted concern for the marine environment as well as the local economy. “The ban is affecting 4,300 families in my village,” said Denzil Fernando, head of the Sea Street Fishermen’s Association in Negombo. “Most people live on one meal a day, how long can we go on like this?” Fernando told AFP. “Either the government must allow us to fish or give us compensation.” Authorities believe the fire was caused by a nitric acid leak which the crew apparently knew about nine days before the blaze started. Police said three officers from the ship — two Russians and an Indian — had been questioned and their passports impounded. The ship was heading to Colombo from India. Its 25 crew were evacuated last week. Two suffered minor injuries.