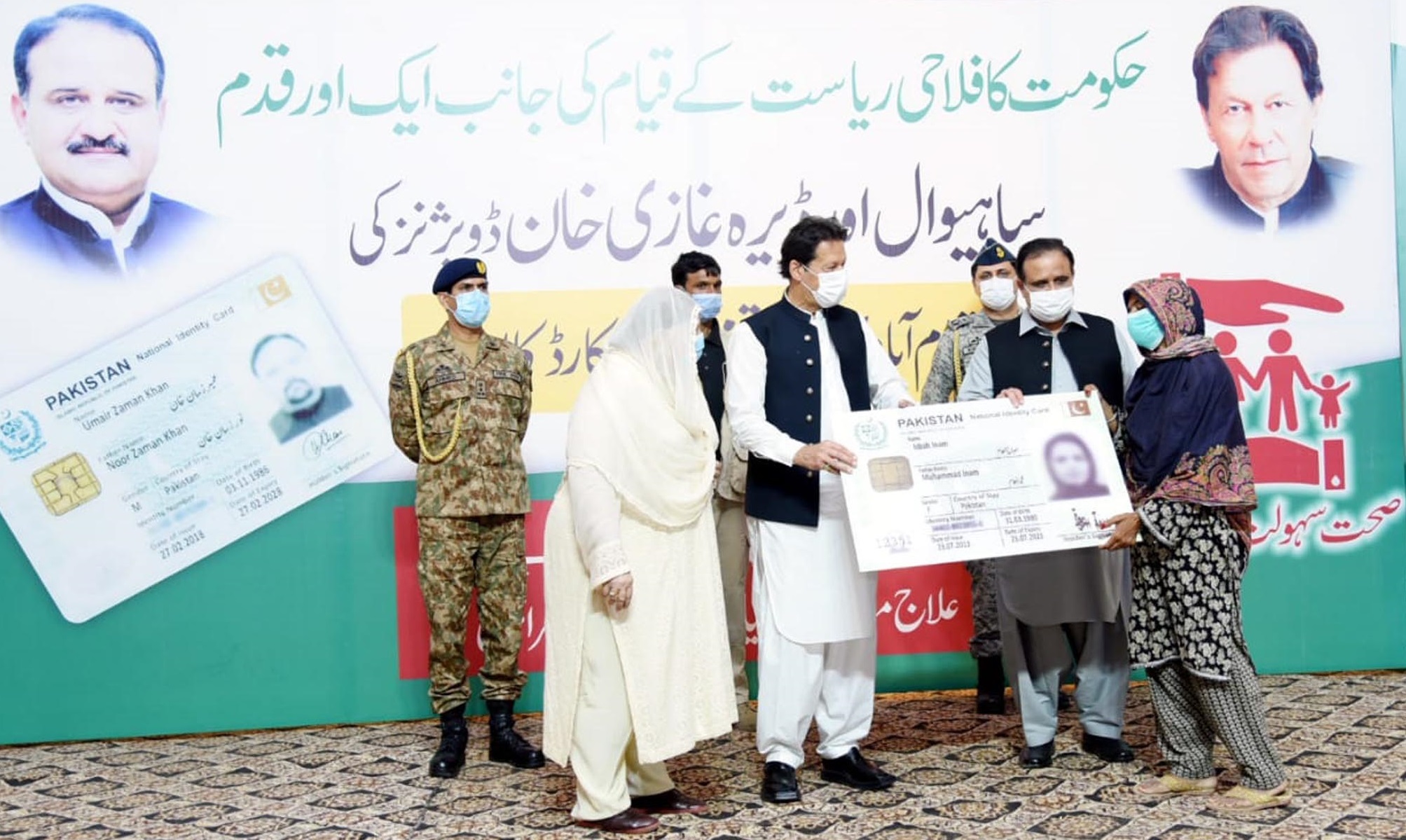 LAYYAH: Prime Minister Imran Khan on Wednesday said that provision of health card to citizens would ensure complete and free of cost health coverage which was unimaginable in the country’s history.

Addressing a launching ceremony of Sehat Sahulat Card for Sahiwal and Dera Ghazi Khan, he said that now, with extension of facility of health card to every family of the Punjab province, poor people would no longer have to worry to get the medical treatment.

Imran Khan said that every family in these two divisions could now avail health treatment worth Rs720,000. He said that they could get health facilities in all the public and private hospitals alike. As informed by Punjab minister for health, Rs300,000 additional amount could be given to the deserving families when required, he added.

He said that the system of universal health coverage initiative was new for the countrymen and stressed that they would have to keep vigilance. He said that it will become a safety net and would end health concerns of the poor people. He also underlined the need to encourage the private sector to fully participate in health initiatives.

The prime minister observed that the government owned lands could be offered to the private sector at affordable prices for the construction of hospitals and other health facilities especially in the far-flung areas of the country. He said that he wanted that every family in Punjab should have health cards facility.

He said the country was burdened with huge debts in the past and they had to pay back these debts with interest causing further financial burden. Appreciating chief ministers of Punjab and Khyber Pakhtunkhwa, the prime minister said that despite all financial constraints, the two provinces did great job with launch of health cards initiative covering whole population of their respective provinces.

He urged the Punjab chief minister to pay special attention to those backward areas of the province that had been left behind in terms of development. He noted that migration of the masses from the rural to urban areas took place due to lack of job opportunities and basic facilities, multiplying population of cities which led to multitude of serious civic issues like sewerage and scarcity of drinking water.

The prime minister regretted that Pakistan had to become an Islamic welfare state, but it could not achieve that objective. Highlighting the motive behind launch of the health cards facility, he said that the poor families did not have enough resources to meet their health requirements. He said consideration for the plight of poor families had led to establishment of the Shaukat Khanum Memorial Hospital (SKMH).

Under the health insurance, he expressed the confidence all such basic requirements would be met. In Pakistan, he said that child mortality rate and ratio of pregnant mothers’ deaths had been very high, so, it was prerequisite to establish health facilities in all the backward areas. He appreciated the solarization of all basic health units in the backward areas of Punjab province as a very good initiative.

He said that some 50-60 years back, Pakistan had been excelling in the world in every sector of life. During his stay in the United Kingdom, he witnessed two things linked with the functioning of a welfare state, including rule of law as everyone was treated equally, secondly, provision of free health facility to each British citizen besides, provision of unemployment benefits, free legal aid and free education with high standard.

The prime minister directed Inspector General of Punjab Police to take strict action against dacoit gangs in the areas which had been pestering the local people with their inhuman acts. Earlier, Chief Minister Usman Buzdar apprised that different uplift projects worth 21 billion rupees were underway in Layyah.

He said that every resident in the province would get health cards facility by the end of the year. Punjab Minister for Health Dr Yasmeen Rashid said that a vast network of health facilities would cater to the health requirements of the residents of the province. Earlier, the prime minister also laid stone foundation of 200-bed mother and child hospital.