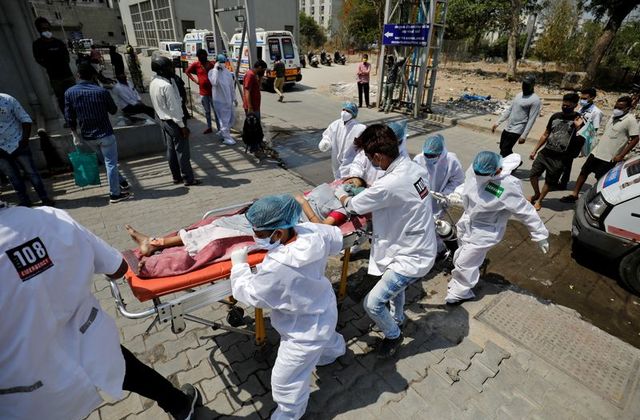 India reported on Monday that the mortality rate in the country has passed more than 300,000, due to the coronavirus pandemic, making it the third country in the world, after the United States and Brazil, to hit such figure in its battle against the infection.

This South Asian nation has been breaking single-day records, especially with the number of fatalities in recent weeks. Along with the healthcare system of the country  being overwhelmed by the current wave.

India’s current toll stands at 303,720, after adding 50,000 deaths in just under two weeks, as the total number of patients infected has risen above 26.7 million, according to the data provided by the Indian health ministry. The data further reported 4,454 Covid-19 deaths in the past 24 hours, the second-highest death toll since their last record of 4,529, on Wednesday.The continued high number of deaths came with the spread of the infections in major cities, including the capital New Delhi and financial hub Mumbai, where lockdowns have been imposed to stem the spread of the virus.

“Deaths always will lag cases… People who have been diagnosed with infection now will go into hospital, and then a small number of them will die but that will be later,” Ashoka University biology professor Gautam Menon told AFP Monday.

Many experts also believe the actual toll is much higher than what’s being reported. Particularly as the disease is spreading into rural areas, where there is a majority of 1.3 billion people living, with little to no healthcare facilities.

The wave has overwhelmed hospitals with patients flooding in, leading to a severe shortage of oxygen and other critical drugs. Harrowing images of long queues for funerals, and makeshift pyres have also emerged from crematoriums and cemeteries. Bodies of suspected patients infected by Covid-19 are meanwhile being seen floating down the holy Ganges river, or buried in shallow graves.

“We are seeing bodies along the river Ganges which don’t seem to be recorded as Covid deaths but are very likely to be Covid deaths,” Menon said.

“While everyone agrees that there is death undercounting, the question is – what is the extent of the undercounting and has it consistently been a large figure, or has it only gone up… over the past three weeks to a month.”

Experts warned that religious festivals and packed state election rallies held earlier in the year could have led to the spread of the virus reaching an all time high. At this point mass vaccinations are the only long-term solution. India has vaccinated just over 196 million people since mid-January, according to experts, this programme needs to be significantly stepped up, if they are to cope with the rising numbers. The country, home to the world’s largest vaccine maker, has halted exports of vaccines to meet local demand.