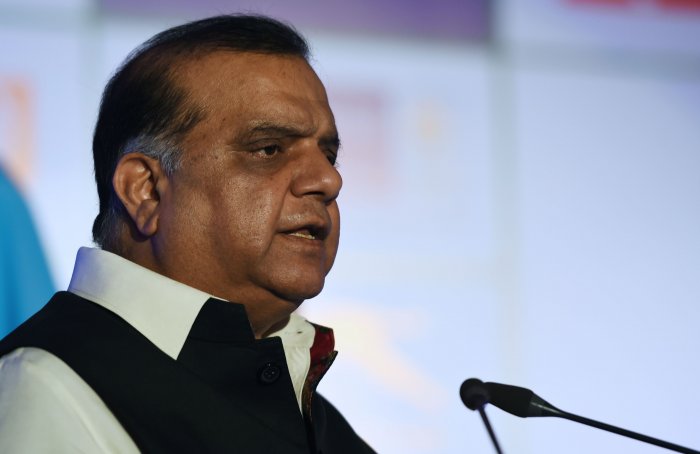 ISLAMABAD: The 47th FIH Congress session, where hundreds of delegates from all over the world gathered in a virtual forum to discuss important matters regarding hockey’s global status and development, has ended with various crucial decisions.

In the closest of votes, Dr. Narinder Dhruv Batra of India was re-elected as President of the FIH, being awarded a second four-year term, said a press release.

Of the 124 votes submitted by member National Associations, Dr. Batra attained the required absolute majority of more than half the votes, receiving 63 votes to the 61 given to Marc Coudron of Belgium. Dr. Batra will hold the position until 2024.

“I would personally like to thank all of the National Associations for showing faith in me by electing me for a second term as President of FIH”, said Dr. Batra, who congratulated Marc Coudron on his campaign.

“I pledge my assurance to you all that I will work towards my election priorities over the next three years.”

In addition to Dr. Batra’s re-election, Danae Andrada Barrios and Hazel Kennedy were both re-elected to the FIH Executive Board as women’s members.

Danae Andrada Barrios and Hazel Kennedy received 70 and 66 votes, respectively, just ahead of Inez Cooper, who received 63 votes. Tayyab Ikram and Erik Cornelissen were re-elected unopposed to the FIH Executive Board as men’s members.

In the President’s Report to Congress, Dr. Narinder Dhruv Batra detailed the efforts made by the FIH since the previous 46th FIH Congress that took place in New Delhi, India, in 2018, referring to the launch of various new events, including the FIH Hockey Pro League, FIH Nations Cup, and FIH Hockey5s World Cup as well as the approval of the eight-year global hockey calendar.

Dr. Batra also talked about the progress made in terms of development, promotion – particularly, the success of the Watch. Hockey app -, governance and sustainability, referencing the commitment to develop a water-less turf for hockey in the years ahead.

In his report, FIH Chief Executive Officer Thierry Weil highlighted the 225 courses that the FIH Academy had organised over the past year and the 50 projects completed through the Olympic Solidarity scheme. With 2 million USD invested, development remains a top priority for the world governing body. Additionally, the State of the Game survey revealed that global participation had risen from 29.6 million to 30.1 million, with fantastic growth being achieved in ParaHockey / Hockey ID, where participation has doubled thanks to support from the Continental Federations (CFs) and National Associations (NAs) The significance of the FIH Hockey Pro League and Hockey5s were also raised, with Thierry Weil stating that the former is well on its way to fulfilling its mission to promote hockey worldwide despite the challenges of the COVID-19 global health pandemic. At the same time, the latter will mark itself as a wonderful ‘entry gate’ to the sport that will serve to complement – not replace – the 11-a-side and indoor formats. The FIH CEO also flagged the rise of E-sports and gaming as an area for potential expansion in the future.

The FIH Financial Report was also submitted to Congress and subsequently approved. The significant investment made into the launch of the FIH Hockey Pro League resulted a loss of 1.5million CHF for the 2019 edition, with 2020 breaking even. Due to signed contracts in place, both the 2021 and 2022 editions of the FIH Hockey Pro League are set to achieve profitability. Signed contracts for the next Women’s and Men’s FIH Hockey World Cup events in 2022 (Women – Spain & The Netherlands) and 2023 (Men – India) are set to generate around 7million CHF in profit for FIH. The financial statements for 2018-2019 were prepared by auditor Ernst & Young, which was re-appointed by Congress for the coming period, and circulated to all NAs and CFs ahead of Congress.

The Congress ratified some amendments to the FIH Statutes, including using gender-neutral terms throughout the Statutes themselves, as recommended by the Women in Sports Committee’s review of the FIH Gender Equality Policy. E-Games were also added to the Statutes to extend FIH’s purpose and powers in anticipation of future virtual competitions or activities. The subscription system to the FIH, which remains unchanged from previous years, was also ratified by Congress.

In line with the existing FIH Statutes, the appointment of George Bennett as the President of the FIH Judicial Commission – a group of legal advisors that acts as a mediator in FIH legal matters – was ratified by Congress. George Bennett has held the position since 8 May 2020, taking over the role following the sad passing of the previous incumbent Annabel Pennefather, one of many whose memory was honoured by a moment of silence at the start of the session.

While the vast majority of the FIH Award winners were revealed on Friday, the FIH President’s Awards – which are given to individuals for long and valuable services to hockey, whether direct or indirect – were saved for the Congress session itself, with 10 awardees being revealed.

Maureen Craig-Rousseau: Joined the FIH Executive Board in 2014 and has over 30 years of experience serving the sport in various administrative roles, being Director and Vice President of the Pan American Hockey Federation (PAHF) and a hugely experienced Tournament Director and Technical Official.

Shri. V Karthikeya Pandian: Private Secretary of the Chief Minister of Odisha, the Indian state that has and continues to be a huge champion of the sport of hockey.

Nii Quaye-Kumah: A well-respected Technical Official from Ghana, Nii Quaye-Kumah has been active at numerous world-level events down the years and has also had a distinguished service period with Ghana Hockey.

David G Collier: An English sports administrator in hockey and cricket, David G Collier is a former international umpire and respected Technical Delegate who was the Chair of the FIH Rules Committee until this Congress, when the term of office ended.

Roger St-Rose: A former Trinidad & Tobago international player, umpire, and Umpires Manager, Roger St-Rose has also been on various FIH and PAHF Officials committees in the latter part of his 40+ year involvement in the sport.

Bob Claxton: The Secretary-General and Treasurer of the Oceania Hockey Federation, the Australian has a 60+ year association with the sport and has been instrumental in the growth of hockey in the Pacific Island region.

Kim Myung Sung: An Executive Board member of Asian Hockey Federation and Chairman of AHF Governance Panel, and member of the AHF Finance committee and vice president of the Korean Hockey Association.

There was also a special honour for Dr. Thomas Bach, the President of the International Olympic Committee (IOC), who was the recipient of the FIH President’s Award for Peace and Friendship.

“This award belongs to the whole of the IOC and the entire Olympic movement because without the support of so many, the achievement of peace and friendship in sport could never be accomplished,” said the IOC President, in a specially recorded acceptance video.  “The purpose of the IOC was always to promote peace and friendship through sport. It remains the overarching mission of the IOC and the Olympic movement to this very day. We can only make the world a better place through sport if we care for one another through solidarity. This is why I would like to thank the FIH and the hockey family across the globe for demonstrating that solidarity runs strong in our Olympic community.”

In a separate message recorded to mark the start of the 47th FIH Congress, Dr. Bach described the upcoming Olympic Games Tokyo 2020 as being “the light at the end of a very dark tunnel,” whilst also praising the efforts of the FIH Hockey Pro League to show that international sporting fixtures can be staged safely in these difficult times.

Closing the 47th Congress, re-elected FIH President Dr. Narinder Dhruv Batra thanked everyone who took part in the 47th Congress, stating: “Although we have been unable to meet in person due to the ongoing COVID-19 global pandemic, I still believe through your support we have been able to have a successful Congress. I offer my congratulations to the re-elected members of the FIH Executive Board and wish them well for the next term. I want to place on record my gratitude to all hockey stakeholders, including commercial partners, sponsors and broadcasters, media, press, athletes, teams, coaches and especially volunteers, who are the backbone of hockey.”