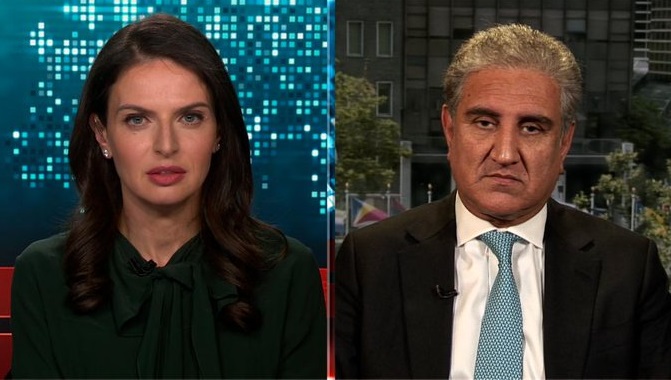 ISLAMABAD: The Foreign Office on Friday said that remarks of Minister for Foreign Affairs Shah Mahmood Qureshi made in his interview with CNN could not be construed as anti-Semitic by any stretch of the imagination.

“Any twist given to the foreign minister’s remarks would unfortunately prove the very point he was making,” Foreign Office spokesperson Zahid Hafeez Chaudhri said in response to media queries regarding comments of CNN anchor Bianna Golodryga, who had given the impression that Qureshi’s remarks were ‘anti-Semitic.’ It is pertinent to mention here that the ‘anti-Semitic’ means hostile to or prejudiced against Jewish people.

The Foreign Office said that the right to freedom of expression must be respected equally by everyone. Qureshi had lashed out at Israel for controlling the media and having deep pockets. “Israel is losing out,” he said in the interview. “They’re losing the media war, despite their connections. The tide is turning,” he added.

“I will not justify any rocket attacks, and I cannot condone the aerial bombardment that is taking place,” Qureshi said, describing Israel’s attack on Hamas as genocide, ethnic cleansing and war crimes. Federal Minister for Human Rights Dr Shireen Mazari defended the remarks of the foreign minister, calling the anchor’s comments as rubbish. She said when Israel’s deep pockets were highlighted, it got labelled as ‘anti-Semitic.’

When the interviewer shared a part of the foreign minister’s interview with this comment that ‘he began the interview by invoking an ‘anti-Semitic,’ the people from various countries hit out at Bianna Golodryga, even a response read as, “Trump was right, CNN is fake news.” Another reader wrote, “I’m shocked as to why anyone would think otherwise. Shame on you (Bianna) and CNN for using this hateful and dangerous label just to deflect from Israel’s war crimes and skew the narrative in Israel’s favour.”

In his repose, a Pennsylvania resident wrote that he is Jewish and confused on how that (comment) is a slur. A lot of Pakistanis, Palestinians, and people from Arab countries as well as American and European nationals openly criticized the CNN interviewer with a biased attitude. Even, some wrote on her twitter account that Foreign Minister Qureshi shared what is right. They said that pointing out Israel for its control and influence over the media and global narrative is not antisemitism.