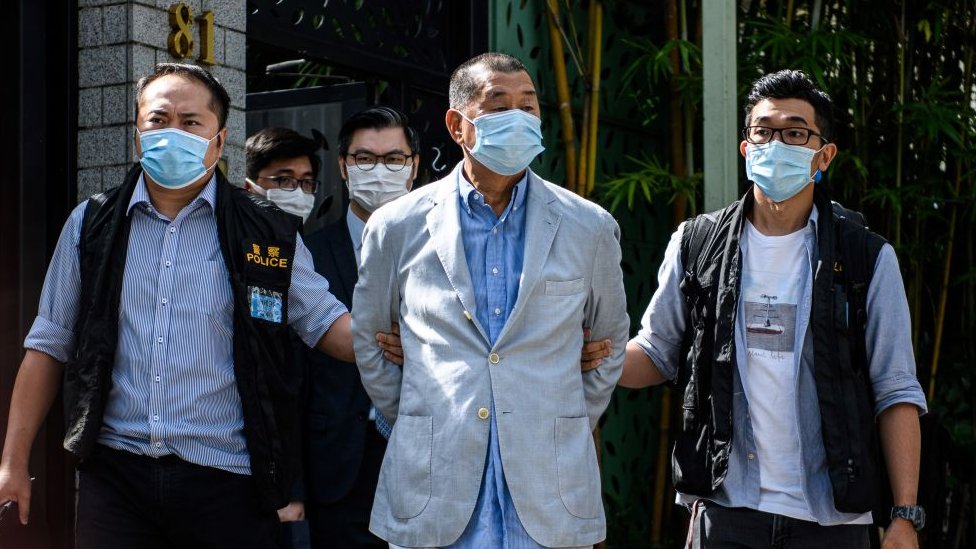 The trading of stock in Hong Kong’s largest pro-democracy media group was halted Monday, days after authorities froze the assets of its jailed owner Jimmy Lai under a new national security law.

The announcement came the same day Lai — who is already in jail — pleaded guilty alongside nine other activists to “unlawful assembly” charges, the latest in a string of prosecutions brought against the city’s democracy movement.

In a statement to the stock exchange, Next Digital Limited — which publishes the Apple Daily newspaper — requested a halt to trading “pending the release of an announcement” about Lai’s frozen assets.

Hong Kong’s Security Bureau on Friday said it was freezing Lai’s shares in Next Digital as well as the contents of three of his bank accounts, using the security law which Beijing imposed on the city last year.

It marks the first-time authorities have wielded the law to freeze the shares of a listed company’s majority shareholder — a step that could cause further jitters for investor sentiment in the business hub.

A rags-to-riches billionaire, Lai, 73, has long been a thorn in Beijing’s side thanks to his caustic tabloids and unapologetic support for democracy.

Apple Daily, the city’s most popular tabloid, has staunchly backed Hong Kong’s pro-democracy cause, including the huge and often violent protests that swept the international financial hub in 2019.

Chinese authorities have made no secret of their desire to see Apple Daily shut down and Lai silenced. Hong Kong police chief Chris Tang has also accused Apple Daily of publishing “fake news”.

Apple Daily responded with defiance over the weekend, saying that the company’s own bank accounts were not affected.

“Apple Daily staff vowed to continue speaking out for the truth without fear despite the newspaper group’s challenges,” the paper said in a report over the weekend.

Other weekend articles included a column about the persecution of Uighur Muslims in China’s Xinjiang region, the use of public hotlines to report national security offences and an editorial on the recent discovery of a senior Hong Kong national security police officer at an unlicensed massage parlour.

However, Apple said the company would probably only survive another nine or 10 months without Lai’s cash, which he has used to prop the group up.

Lai owns around 70 percent of Next Digital’s shares. The asset freeze comes as Chinese authorities roll out a relentless and successful campaign to silence dissent in Hong Kong.

Lai faces a raft of prosecutions.

He is currently serving a 14-month jail sentence for taking part in two of the 2019 protests.

On Monday he and nine fellow activists pleaded guilty to attending another protest on 1 October 2019 — China’s National Day — which witnessed some of the most violent clashes between hardcore protesters and riot police.

It was a vivid and embarrassing illustration of how huge swathes of Hong Kong’s population chafe under Beijing’s rule, as the government celebrated 70 years since communist China’s founding.

The rallies Lai and others attended were not violent but they had no official permission and prosecutors later brought charges. They will be sentenced on May 31.

Lai was also detained under the security law last year and charged with “colluding with foreign forces” for allegedly advocating for foreign sanctions.

More than 100 people — including some of the city’s most prominent democracy activists — have been arrested under the law.

Most of those charged are refused bail and those who are convicted face up to life in jail.