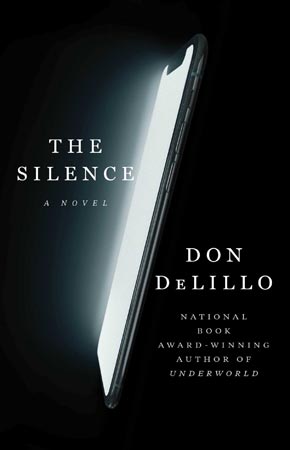 Silence is the result of the failure of the progress of mankind based on Internet technology and our over dependence on it and as a result ignoring and discarding totally the use of natural process.

It was predicted that no sooner any satellite fails in its communications, the machines depending on it for its communication would go dumb and the world can go dark altogether and return the humanity to its basics. So, to destroy a country and its communications within and without can be totally stopped by an attack on the satellite systems and the whole system of even the most powerful nations can be paralysed.

A similar situation is portrayed by DeLillo in his novel The Silence. This is by the author of the ‘Falling man’ which was written on the fall of American world trade centre. It’s a short piece of writing of just 65 pages. It should be termed as novella but then most of the fictions being written these days is like that. The novel begins with a flight which goes abnormal in its behaviour because of failure of the Internet services on the ground. Before this failure, the game of numbers on the screen which keeps on happening. Some people who do not sleep they keep on observing these numbers in the plane, regarding its speed, altitude, destination distance, temperature, destination time. The passengers are keeping themselves busy in these activities and in observing other activities and words critically.

People would use cell phones and would lose some of their skill. For example, when something was typed, the cell phone offered suggestions and so memory was not to be teased. Same is the case with online work. Here a poet is mentioned who wrote online poetry and would get it published as well. But now because of the collapse of the online resources, sources and connections, all was lost. Similarly, a flood of information was available in the airplane seats and the facilities like eating, drinking and sleeping were also abundantly available. But after the breakage of the whole system even the landing of the of the plane proved an issue because no proper google guidance system was working. The inside of the plane is told in the words:

People would use cell phones and would lose some of their skill. For example, when something was typed, the cell phone offered suggestions and so memory was not to be teased. Same is the case with online work

A massive knocking somewhere below them. The screen went blank. Pilot speaking French, no English follow-up. Jim gripped the arms of his seat and then checked Tessa’s seatbelt and retightened his. He imagined that every passenger was looking straight ahead into the six o’clock news, at home, on Channel 4, waiting for word of their crashed airliner.

The novelist maintains the interest of the reader by providing the just-before-moment of the silence where all was happening as it has been in the world of capitalism. Like advertisement flood available always and everywhere which were always watched by Max who was a like a customer who never buys but only watch ads. Not only this, pre-silence markets are flooded with big screens showing sports and other cultural activities on going with their bright colours. How all this shakes when the screens begin to shake? “Then the screen went blank. Max hit the power button. On, off, on. He and Diane checked their phones. Dead. She walked across the room to the house phone, the landline, a sentimental relic. No dial tone. Laptop, lifeless. She approached the computer in the next room and touched various elements but the screen stayed grey”.

The silence, therefore, descends all around that Diane terms it as the fall of civilization and clarifies what does it mean when the silence begins. With Diane, Max, Tessa and Martin all agree that they have to return to their humanness once again without involving the machines. Martin and Diane prove it right and think that their world of screen has ended and now they have to be human with each other. These characters from the modern life are able to realize that “Whatever is going on, it has crushed our technology. The word itself seems outdated to me, lost in space”.

One of the good but equally dangerous thing happens that all the deadly weapons of the world have become dysfunctional because of the loss of the communication. “People begin to appear in the streets, warily at first and then in a spirit of release, walking, looking, wondering, women and men, an incidental cluster of adolescents, all escorting each other through the mass insomnia of this inconceivable time”.

The writer fails to address the global pandemic situation and is simply referring to the end of the civilization established by the western world based on the theories provided the scientists like Einstein. This is the end of that civilisation and therefore is very bleak portrayal of progress of humanity. The writer ends the novel with a hopelessness and depression of man when the writer says: “Max is not listening. He understands nothing. He sits in front of the TV set with his hands folded behind his neck, elbows jutting. Then he stares into the blank screen”.