Pakistan had demanded Farooq’s extradition as he was wanted for his involvement in terrorist activities. Afghanistan had rejected Pakistan’s demand that time and said he would be tried in Afghanistan.

The Afghan intelligence chief Ahmad Zia Siraj told reporters in Kabul that Afghan side discussed the exchange of several prisoners with a Pakistani delegation which visited Kabul on Sunday.

Siraj said Afghanistan had offered Farooqi exchange with several Taliban leaders after his arrest but Pakistan had not agreed to the suggestion.

There is no prisoner exchange agreement between the two countries.

The Afghan spy chief claimed that authorities have arrested 408 Daesh militants and 60 percent among them are Pakistani nationals. 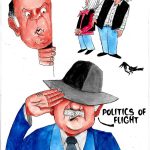