* Among common people in general and Urdu lovers in particular, Dr Nazir Mushtaq is a prominent name 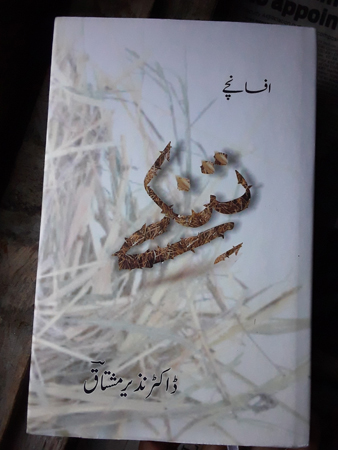 Dr Nazir Mushtaq is a renowned physician and distinguished writer of valley. He is regarded among the decades old lovers of Urdu language and literature.

Though during mornings and evenings he remains busy in giving consultation to his patients at his clinic but whenever he gets the free time, without wasting the precious time he gives words to his idea’s in the form of micro fictions or Afsanchas. He is very popular among his patients as well as among social media users because whenever he composes any fiction or micro fiction, he uploads it on Facebook site of social media. Within no time viewers in thousands like and respond to his writings through their upright comments. In his fictions and micro fictions readers routinely get a message. Mostly his fictions reflect the societal wrongs in the community besides the measures to be taken in order to overhaul the system and uproot the wrong doings in the society. I have been studying the Dr Nazir Mushtaq’s writings since his days when he used to write columns in daily Kashmir Uzma about health issues and I was doing my graduation during those days.

Dr Nazir Mushtaq’s love for Urdu language and literature is evident from the fact that even in his 70s, he is determined and fully vibrant to decorate the crown of Urdu through his writings. Among common people in general and Urdu lovers in particular, Dr Nazir Mushtaq is a prominent name.

I am also friends with Dr Sahib on Facebook and whenever his fictions or micro fictions catch my attention, I first read them all and later comment on them because his every writing is tasteful. Honestly speaking few months ago, Dr sahib had written a micro fiction/ Afsancha under the title “Khoon Blood” on Facebook and when I read it and showed it to my better half, from that day she is respecting him and reads his fictions with more interest and enthusiasm than me. But unfortunately for few weeks, I am not viewing his writings on the Facebook because either Dr sahib has blocked me for unknown reasons or due to some technicalities of the site I may not be getting his writings. Hope in near future things would be altogether right and I will be in a position to view his stories.

I am also friends with Dr Sahib on Facebook and whenever his fictions or micro fictions catch my attention, I first read them all and later comment on them because his every writing is tasteful

Almost a month before when Dr Sahib uploaded a Facebook post announcing that he has compiled a book ” Tinkey” containing a century of his composed micro fictions, my spouse compelled me and from the day first of it’s hitting the strands begged me to fetch a copy for her. From Qazigund to Srinagar I travelled twice to get the copy. In the first it wasn’t available and I wrote a message on Facebook to Dr sahib about the book unavailability but when I visited the KBD book shop during the second time I was successful in getting the book “Tinkey”.

This book ” Tinkey ” is published by GNK Publications Charari Sharif Budgam, containing a hundred micro fictions spread over 198 pages. This book is beautifully designed and the quality of paper used in the book is worth for compliments. For Urdu lovers and Urdu students, it is not less than a great gift Dr Nazir Mushtaq has kept available for them. The preface of the book “Tinkey” has been compiled by Noor Shah the legendary fiction writer of valley. In his writing about the book “Tinkey”, Noor Shah says ” there is a galaxy of good fiction writers in Jammu Kashmir and so far as Dr Nazir Mushtaq is concerned he is a unique name in the world of excellent microfiction composers. His love for writing microfictions is analysed from the fact that this book is its first kind any author has written in valley.

About the book Dr Nazir Mushtaq has written under the heading ” Mere Afsaache” Tinkey the collection of a hundred microfictions is in your hand now. Writing microfictions is my hobby. When i come out of my busy clinical schedule, i enter in the literary world and start writing the fictions. Further Dr sahib is of the view that his composed microfictions are like his children and he is their mother.

Famous writer, poet and translator Parvez Manoos has also penned some beautiful words about this book. He writes ” though Dr Nazir Mushtaq is a medical doctor by profession but he has felt in deep love with Urdu language and literature. In Dr Nazir Mushtaq’s microfictions we come across the different colours of life experienced by Dr sahib in his day to day life. To express big things in few lines or words needs an expertise, Dr Nazir Mushtaq is fully acquainted about that skill and it is the only reason behind his popularity.

Wehshi Syed Chief editor Nigeena International writes about the book ” one must be an ultraexpert while projecting a big idea or thought and summarising it in just a single page or two. Dr Nazir Mushtaq is a brilliant expert of that virtue.

Dr Riyaz Tawheedi Kashmiri has written a four-page brief summary of “Tinkey” in the end. He is of the view ” In Jammu Kashmir a big number of writers have risen too much prominence despite not being the students of language and literature. Among them Noor Shah, Wehshi Syed, Mushtaq Mehdi, Deepak Budki, Parvez Manoos, Raja Yousuf, Nasir Zameer, Zubair Qureshi etc etc are worth to mention. Though Dr Nazir Mushtaq is a physician but he has successfully risen too much prominence in the world of Urdu literature.

Dr Nazir Mushtaq has dedicated this book to his loving sister Tahira Bano, better half Dr Raas Masood, Waseem and Yawar and to his all Facebook friends. This book reminds us that things aren’t upright in Kashmir society and our cultural heritage and ethos is losing its sheen with each passing day. Dr Nazir Mushtaq has composed microfictions in this book dealing with almost all aspects of society however his most microfictions are related to his medical profession.

“Tinkey” has a mesmerising look and beautiful design. I hope Urdu lovers will appreciate the good work of Dr Nazir Mushtaq after reading and studying it thoroughly. I am of the strong opinion that Urdu literature lovers and those who intend to write short stories in Urdu to get a copy of Tinkey so that they feel much comfortable in composing their stories with much ease. Lastly I congratulate Dr Nazir Mushtaq for writing this good piece “Tinkey”.

The writer is a columnist and a fiction writer and teaches at Government Secondary School Anderwan, Ganderbal. He can be reached at rayeeskumar31@gmail.com and Tweets at @rayeeskumar31