* PM says government will initiate a programme to provide direct subsidy to 30 million families, around half of country’s population, from June this year 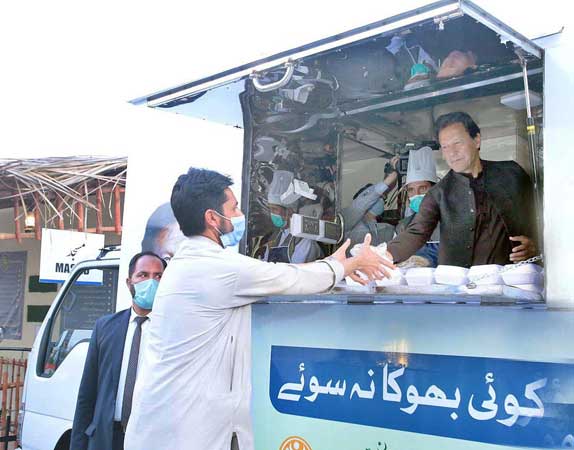 Prime Minister Imran Khan Wednesday said the government, in order to protect the poor people from inflation and price-hike, will initiate a revolutionary programme of providing direct subsidy to 30 million families – around half of the country’s population from June.

The prime minister on Wednesday launched the ‘Koi Bhooka Na Soye’ programme, under which the poor and labour classes would be provided free meal boxes twice a day through mobile trucks at various points of the twin cities of Rawalpindi and Islamabad.

The prime minister described the ‘Koi Bhooka Na Soye’ programme as the beginning of Pakistan’s transformation into a welfare state. He appreciated the Ehsaas and Bait-ul-Mal teams for the successful launch of the programme and said the provision of free meals would help the poor, deserving, labourers and daily wagers to save their hard-earned money to fulfill the needs of their children and families.

Imran Khan directed the officials concerned to particularly take care of the self-respect of the poor people benefiting from the government-sponsored facilities of Panaagahs (Shelter Homes), Langars (free meals) and ‘Koi Bhooka Na Soye’. He said the mobile trucks or vans carrying food should especially visit the localities of the poor and labourers to ensure that the free meals reach the deserving.

The prime minister said the programme was initially being started in Rawalpindi and Islamabad, which would help the government learn about the issues and problems, and improve it before its extension to other cities. “It was my dream to extend the programme to the whole country and we will do it,” he added.

Imran Khan said a large number of philanthropists in the country desire to participate in such programmes, and believed that the success of pilot project in the twin cities would help win their trust to contribute towards its extension across Pakistan. He also mentioned with pride the government’s health card scheme in Punjab, Khyber Pakhtunkhawa and Gilgit Baltistan, under which each family was entitled for medical treatment worth Rs 1 million from any public or private hospital.

As per estimates, each food truck would feed two meals to around 2,000 people daily, and would target those, who could not reach the Panahgaahs for food. The programme has been designed in a public private partnership mode whereby the PBM would be responsible for the operations of food trucks and Saylani Welfare International Trust would be responsible for the provision of meals.

To make the programme financially stable, the Poverty Alleviation and Social Safety Division has constituted a “Donor Coordination Group” that would serve as an Ehsaas channel to engage with the private sector. Pledges and commitments by the private sector, international agencies, philanthropists, civil society and individuals would be overseen by the coordination group. The step was a new policy initiative of the federal government to eliminate hunger in the country. It was an extension of the Ehsaas Langar Policy, which was aimed at distributing cooked meals at designated delivery points to the people in need, especially those at risk of or experiencing hunger.