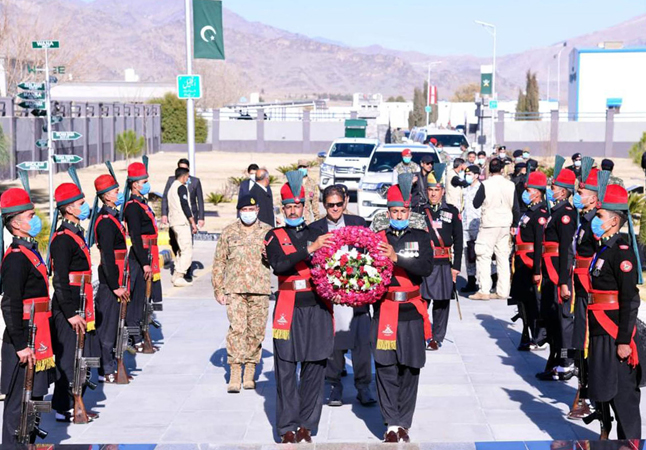 Prime Minister Imran Khan on Wednesday challenged for the foreign funding case hearings to be broadcasted live on television.

Addressing journalists in South Waziristan during his day-long visit, the prime minister said the case should be heard in the presence of political parties’ leaders. He challenged that it was only the PTI that raised political funds. “The country runs on remittances sent by overseas Pakistanis,” PM Imran said, adding that they also helped him with funds for Shaukat Khanum Memorial Cancer Hospital.

The prime minister thanked the opposition for raising the foreign funding case, adding that it should be noted where the funding of the PTI and opposition parties has been coming from. “Everyone should know where they [the opposition] collected the money from. The whole nation will know who raised money properly in this country,” he asserted.

Moving on Jamiat Ulema-e-Islam-Fazl (JUI-F) chief Maulana Fazlur Rehman, the prime minister said he used the children enrolled at his seminaries to blackmail the government. He questioned where Fazl’s property – worth billions of rupees – came from, adding that the JUI-F chief was blackmailing the government only to get an NRO.

The prime minister referred to the anti-government drive of Pakistan Democratic Movement (PDM) and said their only objective is an NRO, which he would never give. Former president Pervez Musharraf, despite having all authorities and power, could not sustain pressure and gave two NROs, he added.

Referring to the Pakistan Muslim League-Nawaz leaders and their family members, he questioned if the thieves took the public resources abroad and led luxury lives abroad, how the government would spend and allocate funds for the people’s welfare in the country. The present government is fighting the war for rule of law in the country, he added.

Prime Minister Imran Khan said it was due to the loot and plunder of previous regimes led by the thieves that the regional countries like Bangladesh were now ahead of Pakistan in terms of economic development. “Even if you appoint a thief as head of a factory, it will not achieve progress,” he remarked.

Imran Khan said with focus on ensuring rule of law sans any discrimination of the rich and the poor, the present government is striving to bring about a revolution in the country, which had already started. “If you want to assure yourselves about the start of revolution, you can see the faces of all thieves, who have joined hands and come out on roads. Big thieves, who were looting the country for the last 35 years, have now come together and are now seeking an NRO,” he remarked.

Imran Khan said he would urge his critics, who question about his promise of a Naya Pakistan and welfare state, to study history books to know how the State of Madina was established and was made a welfare state after facing difficulties for four to five years. He said despite all economic odds, the government is committed to and would provide all resources for the development of merged districts of Khyber Pakhtunkhwa.