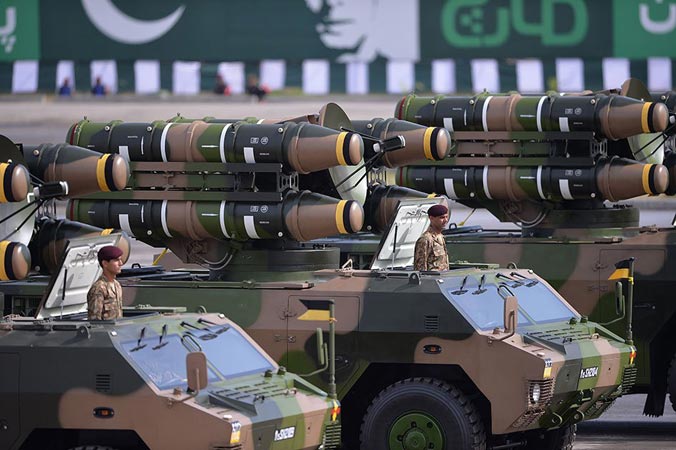 Rge Faisalabad Chamber of Commerce & Industry (FCCI) will liaise between the private sector and Defense Export Promotion Organization (DEPO) to give a quantum jump to the exports of defense related armaments, said Engineer Hafiz Ihtasham Javed, FCCI president, at a meeting organized by the DEPO.

He underlined the importance of self-sufficiency in modern weaponry to make national defense impregnable due to the criticality of geostrategic situation in this region. “Pakistan is also facing “Fifth Generation War” and to thwart it, we must create much needed awareness among masses”, he added. He said the FCCI will create a permanent standing committee on Defense Production which will remain in touch with DEPO and try to bridge the gap between DEPO and private units involved in production of various parts of weapons. He said that Faisalabad has globally acknowledged and internationally compliant industrial estates while a Special Economic Zone (EPZ) is also being developed to attract foreign investors for the establishment of hi-tech and modern industrial units. He said that we must set up an Expo Center in M-3 Industry City or Allama Iqbal Export Processing Zone to showcase the expertise of DEPO in defense production.

Regarding the Corona threat, he said that Pakistan is back on the economic track as our industrialists are more resilient. He also appreciated the focused approach of the government who helped the business community to trigger industrial production by cutting down the electricity tariff. He further said that DEPO should also concentrate on production of skilled manpower which could also catalyze industrial growth in other sectors of economy. Engineer Ihtasham Javed invited Director General DEPO Major General Tahir Gulzar Malik HI (M) to visit Faisalabad and initiate direct parley with the industrialists already working for the armed forces. He said that Faisalabad has a well developed foundry and light engineering sector which could work with the DEPO to fully exploit untapped potential of this sector. He said that the private sector of Faisalabad will feel pride in working with the armed forces and we must take confidence building measures between the two segments.

Continuing President FCCI said that Pakistan is also importing other modern and latest machinery for the industrial sector which could also be manufactured in Pakistan with the courteous of DEPO and other subsidiaries of the armed forces. He also pointed out the problems confronted by the startups in this field and said that they have to contact 22-24 different departments to get NOC and other permissions. He stressed the need to introduce “One Window Operation” and said that Provincial Minister for Industries Mian Aslam Iqbal is already working on improving “Ease of Doing Business”. He said that Chinese investors had also pointed out these impediments and the government is trying its optimum best to remove the same at the earliest.

Earlier Major General Tahir Gulzar Malik explained in detail the scope of work and role of DEPO in promotion of defense related armaments. However he said that involvement of the private sector is imperative to further enhance export of armaments. A comprehensive presentation on DEPO was given to the participants of the meeting while they also visited its Display Center. Vice President Rana Ayub Aslam Manj was also present during this meeting.