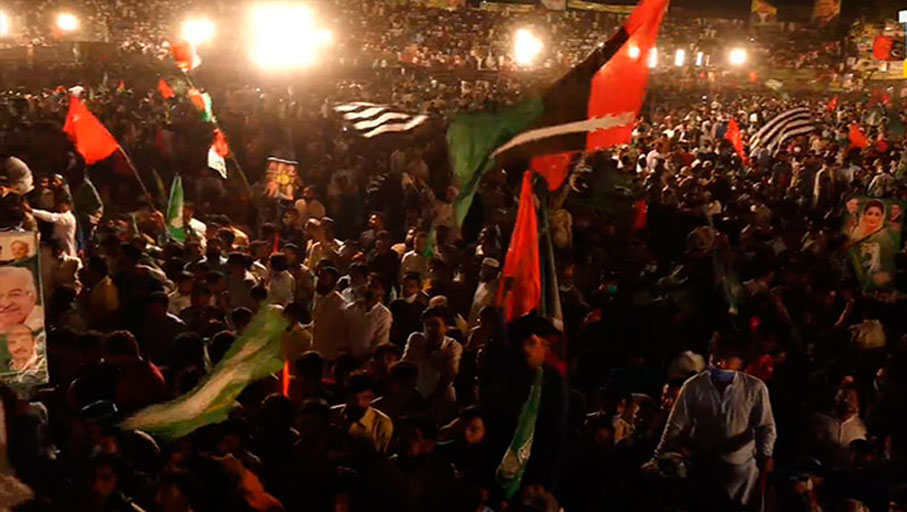 How do we explain opposition parties’ cacophony of protests and resignations? Is it opposition for the sake of opposition, or a quest for power which PDM wants to achieve through whatever means – even if involved a direct military intervention? Is it a match between the conventional status quo and those opposed to it – a contest for establishing the rule of law through good governance and accountability?

Hadnt both mainstream parties PML-N and PPP agreed in Murree in 2008 not to rock each other’s boat and to let the sitting government complete its term? Why then this hue and cry and controversy around the government born out of the same system in 2018?

Is it because the forces of status – the political elites -feel threatened by a person challenging the elite-oriented governance system, a person who operates out of his personal residence and doesn’t really charge the national exchequer for his services as the chief executive of the country? No lavish meals, no camp office at poor peoples’ expense, and hence a staggering 70 percent reduction in PM House’s expenditure in the last two years.

Remember, Sharifs, Gilanis and Zardaris maintained camp offices off the funds that actually should go into services for common people.

The PDM wants the head of an unbending Imran Khan, the prime minister. And the PM wants the heads of all those who he believes have milked the banking system and governance structures to the hilt. He is at pain to understand the astronomical difference between the cost of his recent trip to Kabul and those of his predecessors; the November 19 Kabul visit cost the people of Pakistan less than $ 12000. But the same, one-day trips that Nawaz Sharif and others undertook entailed cost us all at least $ 50,000.

How come that Imran Khan’s New York visit costs the national exchequer some 160,000 dollars. Compare the nearly a million dollars that similar junkets cost the poor people of Pakistan when Sharif and Zardari visited New York? A whopping difference of 850,000 dollars!!

Isn’t it like a black hole that precious public funds disappear into, including loans from international finance institutions (IFIs) ? Insiders say previous rulers have been embracing all sorts of loans from IFIs – all in the name of development, rule of law, access to justice.

The latest example is a revelation by Shabbar Zaidi, whom the FBR bureaucracy hounded out; he told a national daily that he refused a $480 million World Bank loan for the Pakistan Raises Revenues project as he could not justify its correct utilization.

Previous governments accepted these multi-million dollar loans, apparently to shore up foreign exchange reserves and improve the balance of payment without contributing any real change. They only added to the mountain of debt that the country is currently reeling from.

Little surprise that President Zardari had sent out Hina Rabbani Khar, the then foreign minister, and Shaukat Tareen, to lobby with donors to hand out in CASH half of the funds pledged at the Friends of Pakistan forum held at Tokyo in 2010. All such efforts were snubbed because of a) dubious motives, and b) extremely poor and shoddy proposals, ambassadors of three important western countries in Islamabad had told me a little later.

Shabbar Zaidi also speaks about the “weak writ of the state,” something PM Khan appears to be struggling with. Zaidi recounted several reasons for his departure from the FBR including internal pressures and resistance – deeply entrenched bureaucratic status quo that resists reform. This is weighing down the government, Khan told us recently. There is massive resistance from within the system to automation, for instance.

Automation is unavoidable to increase the state revenues. This will also take care of a lot of corrupt practices on ground, he argues. But will he be able to do it after the ignominious exit of Shabbar Zaidi?

Khan remains adamant on taking “all the corrupt” to task but can he really pull it off in a system that is stymied by an excessively interventionist judiciary? The collusion of the corrupt within the bar and the bench itself is the biggest hurdle to the anti-corruption drive, complicated by the incompetence and inadequacies of the National Accountability Bureau (NAB) too.

This convoluted system of governance and partially questionable judiciary places limits to the anti-corruption drive too. It brings the entire government into disrepute because of the flawed process.

That is why more instructive, and probably fruitful, would be to focus on the “cost of incompetence” within the public sector enterprises (PSEs) and governance structures, instead of counter-productively over-emphasisng corruption. Successfully hunting down white collar crimes in a complex and partially compromised judicial system is often more embarrassing than achievement.

Khan is pitched against heavy odds. He rightly complains of strong status quo as his biggest hurdle. But how does he hope to defeat this status quo with his octogenarian team which also includes people who have served successive rulers in the last two decades? How can he hope to stage a revolution with an army that largely comprises conformists? He is surrounded by people who are as strong proponents of the status quo as those he is gunning for. It is these conformist comrades that have stunted the reform process. Will the PM be willing to reset his team for the uphill tasks ahead. Is he ready to engage saner elements within the parliamentary opposition to break the political impasse that is imperiling his governance too?