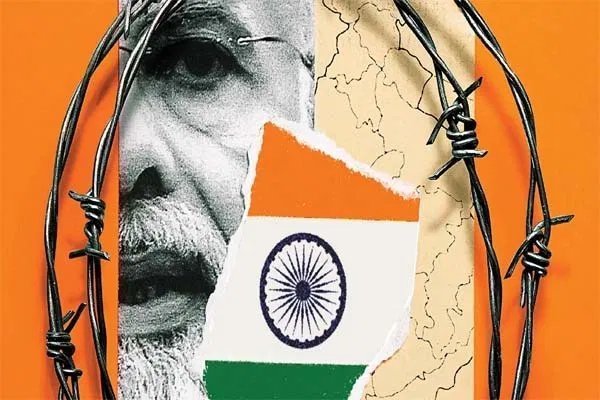 A latest report published by the British Newspaper, said Amnesty specializes in hard truths.It said that Narendra Modi was trying to stifle Amnesty.

No wonder Modi froze it out of India. Forced shutdown of the human rights group will only increase international scrutiny of systemic mis-governance,the paper observed.

Like Russia, Turkey, Iran and Zimbabwe, India has elected leaders, a representative parliament, independent judges, and a lawful constitution.

And like them, this increasingly resembles a deceptive facade. Under Modi, the “world’s largest democracy” has become an eastern house of cards, dominated by Hindu nationalist knaves and jokers, the Guardian said.

According to the British Newspaper, discussing Modi’s landslide election victory last year, Indian writer Pankaj Mishra said this would-be guru, who stresses his humble origins, had seduced India with envy and hate, exploiting inequality, division and grievance against elites in the style of demagogues the world over.

Modi’s method, Mishra wrote, was “to titillate a fearful and angry population with the scapegoating of minorities,refugees, leftists, liberals and others while accelerating predatory forms of capitalism. He has licensed his supporters to explicitly hate a
range of people from perfidious Pakistanis and Indian Muslims to their ‘anti-national’ Indian appeasers.”, the Guardian said it further reported that the latest manifestation of Modi’s
intolerant ethnic-religious supremacism came last week with his government’s bid to silence a leading “appeaser” – Amnesty International, the global advocacy group that has made a habit of bravely speaking truth to power.

The British newspaper further added that Amnesty came into being in 1961 after an English lawyer, Peter Benenson, wrote an impassioned article in the Observer, The Forgotten Prisoners, highlighting the plight of people around the world jailed for peacefully
expressing their views.

“The organisation has since helped secure the release of thousands of “prisoners of conscience”,the paper said.

According to the paper, Amnesty announced last week that it had been forced to shut down operations in India after the government arbitrarily froze its banks accounts – in apparent connection with an inquiry into alleged financial misconduct.

In truth, Guardian said the move was a crude bid to stop Amnesty’s reporting on rising human rights violations suffered by Muslims and other minorities since Modi first took power in 2014.

“It marked the culmination of a prolonged campaign of harassment and intimidation similar to that faced by other independent civil rights groups, journalists, activists and
lawyers”,the paper said.

The Guardian further said that if Modi hopes to stifle Amnesty India’s criticism, he will be disappointed.

It added that on the contrary, the shutdown was likely to increase international scrutiny of systemic mis-governance. Let’s start with Kashmir.

Highlighting the human rights abuses in Indian occupied Kashmir, the British newspaper said that Modi imposed direct rule on the held state last year in what amounted to a constitutional coup.

The ensuing draconian lockdown, detailed by Amnesty, was lifted, then reimposed as Covid-19 spread.

The Gaurdian further reported that Economic uplift and new investment promised by Modi have not materialised. “Normalcy” has not returned.

Meanwhile, an officially sanctioned programme of Hindu settlement was under way, prompting accusations of colonialism.

Kashmir, it is claimed, is the “new Palestine”.,the Guardian said. The British Newspaper added that a scathing Amnesty report about “multiple human rights abuses” committed by police, and inflammatory hate speeches made by Modi’s political allies before and
during communal riots in Delhi in February, was also worthy of broader attention.

The paper said that dozens of Muslims died in the riots. And yet, Amnesty said, “six months on,there has not been a single investigation into the role of the Delhi police.” It condemned “ongoing state-sponsored impunity”.

Amnesty,the paper said has also focused attention on the daily violence, harassment and discrimination faced by women and girls.

The paper said that in 2018, Modi – previously accused of misogyny – mapped out a “women first” national strategy. But like many of his grand wheezes, it has not amounted to much.

There have been some advances, such as expanded rural electrification and banking, and cooking-gas and toilet-building schemes. But Modi’s reign has not brought India the rapid growth, national security and enhanced global status he pledged six years
ago.

The paper said that Unemployment rose sharply after he was elected. His 2016 currency reform was disastrous, as has been his handling of the pandemic.

And there have been recent armed clashes with Pakistan and China, with India coming off worst on both occasions. Bizarrely, Modi is sending tanks to the Himalayas.It may be an uphill battle,the paper said.

Internationally, the paper said India continues to punch below its weight. As an ostensibly likeminded partner for the west, its present leadership is a big disappointment.
Donald Trump may approve of “strongman” Modi’s divisive “new India” rhetoric and disdain for civil rights. Joe Biden will not.

Many in Europe have not forgotten his (Modi) woeful record as chief minister of Gujarat,the Guardian reported.

According to the Guardian, the way things are going, it’s uncertain whether India, once an outstanding role model for the post-colonial developing world, can still be deemed a
functioning democracy at all. “This is chilling. This is grim. This is Modi”,the paper said.