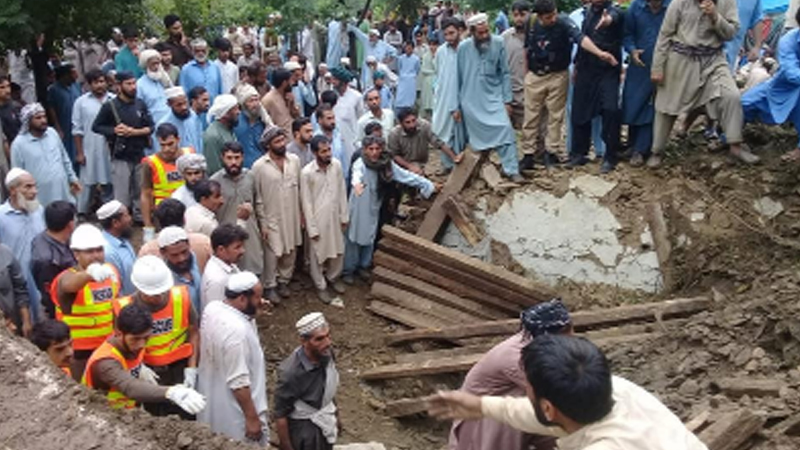 The latest floods-related fatalities were reported from the Swat region, a popular tourist destination where landslides overnight blocked a key mountain road, stranding scores of tourists who were being evacuated, said Taimur Khan, spokesman for a disaster management agency in Khyber Pakhtunkhwa.

Rain has continued to lash different districts of KP including Mansehra, Battagram, Bunir, Shangla, Kohistan and Swat for days causing widespread damage to roads and houses and causing landslides at some points.

Taj Mohammad, spokesperson for the Rescue 1122 service in Bunir, said three people – a woman and two children – were killed and three others injured at Chagharzai while another woman died in the Ryal area of Bunir after the roofs of their houses collapsed due to rain and landslides.

Additionally, four people, including a woman and a child, were killed when their house in Hussain Banda in Oghi tehsil, Mansehra, was hit by landsliding, according to rescue officials.

Battagram Deputy Commissioner Abdul Hameed said that two girls aged between nine and 12 were killed when heavy boulders, displaced by the rains and flood struck their house in the district’s Rashang area. Local people dug through the debris to recover the bodies, he said. Hameed said seven houses had collapsed across the district so far and eight major and link roads were blocked due to landsliding. He said water supply schemes in different parts of the district were also damaged. Meanwhile, a 30-year-old man, identified as Azeem, drowned in the Nandyar river in Battagram while trying to collect wood.

Upper Kohistan DC Arif Yousafzai said around 10-15 houses, a mosque and a seminary was damaged in the rains while link roads of the entire Kandia tehsil were blocked due to landsliding.