Glitzy productions, marches and fiery speeches are a part of the standard operating procedure. The routine matter leading to routine results in – negligible. Focusing on domestic audience in Pakistan will yield nothing but nationalistic credentials for the ruling party. 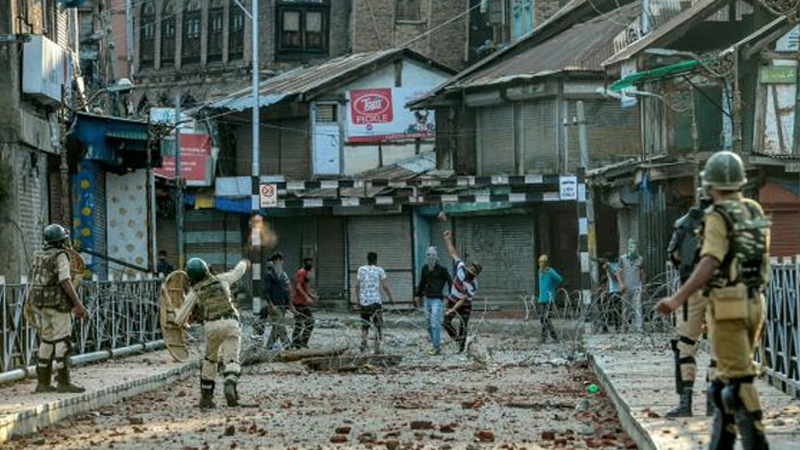 The government needs to recognize what is it that they really want: winning Kashmir or winning the next election with idealistic assurances to win Kashmir? Foreign Minister, Shah Mehmood Qureshi, criticised the OIC and Riyadh in particular over showing lack of concern for the Kashmir issue. Riyadh is a strong alliance of Islamabad, providing jobs to millions of Pakistanis, and it would be naïve to toss the blame on them and put the decade’s old relation into jeopardy. Unfortunately, Mr Qureshi is fighting the battle in the wrong terrain and if we want to be smart with our policy, we need to find the right audience.

A year past the Indian annexation of Kashmir, Pakistan is still flexing its vocals for its independence but naming highways and chanting slogans is definitely not a well-dressed response to Indian aristocracies. Pakistan needs a strategic policy based on realism. A realist policy would emphasize on a mix of diplomacy and strategic communications with the countries that hold power to influence the UNSC – USA, Britain, Russia, France and China. Pakistan’s core objective is to unveil the Indian hostility on the world stage, and the world in this context, are these five countries that hold veto power in the UN Security Council. Luckily, China has been calling out on the issue since the very beginning but the opinion of people and governments of other four countries is also a matter of great importance.

Along with China, Pakistan needs to push the narrative to the West, a right terrain for this battle. Already, the US Congress has held a hearing to examine the human rights violation in Kashmir. Some of the US senators have strongly condemned the imprisonment of a massive number of Kashmiris and have urged president trump is take action. German Chancellor, Angela Merkel, also commented on the situation as unsustainable. Instead of marching and halting its own markets, imagine if Pakistan funds and communicates its strategic narrative abroad, pressure on New Delhi is likely to increase.

A year past the Indian annexation of Kashmir, Pakistan is still flexing its vocals for its independence but naming highways and chanting slogans is definitely not a well-dressed response to Indian aristocracies

New Delhi’s human rights abuses in Kashmir are a problem for India itself. The ongoing preventive detention, arbitrary arrests, and the disparate use of force against civilians in Kashmir are not the trademarks of a flourishing democracy. What is equally worrying is that an Indian Ministry of Home Affairs document titled “The Future Ahead of Kashmir” foresees a lengthy violent struggle and even compares the situation to the US Civil War. The persistence of these actions will make it increasingly challenging for the Indian government to rationalize its motives to the international community. India will not be able to buy the silence of its friends as China has done with Pakistan on the large-scale detention of over one million Uighur Muslims in Xinjiang province.

Meanwhile, the officials play on their established diplomatic fronts, communications and strategy must take a different course. Pakistan must ensure that the Indian hostility in Kashmir is unveiled via raw videos and circulated over the formal and informal networks in the West. We cannot understate the power of social media in today’s world – it reinforces the narrative as per the sentiments of the individual which ultimately reaches the masses and gives rise to a collective movement. Moreover, creating a system for the distribution of content on broadcast, print and other digital platforms would enhance the viewership. The aim is to ensure that the content translates into pressure on the official policy of targeted arenas. The government must allocate a sufficient budget pipeline and train its officials to manage the strategic communications infrastructure. Furthermore, regular monitoring of the content and its viewership would allow the flexibility to mold it according to our desired objectives.