Nestled within the heart of Punjab, the city of Eagles, Sargodha, is not only known for housing the largest airbase, but it also boasts the most prodigious production of citrus fruits, primarily known as Kinnow (mandarin orange). Due to the staggering production of Kinnow, Sargodha was also given the moniker of “the California of Pakistan”, partly due to the fact that the breed of Kinnow itself was first cultured and grown within California. While earning an export revenue of around $200 million yearly by exporting fruit, the Kinnow serves as the linchpin for not only the citrus production, but also for the overall production of fruits in Pakistan. However, recently there has been a substantial diminution in the quality of Kinnow production, which has opened the door for PFVA to go for a self-imposed ban on the export of Kinnow to Europe. Kinnow which was once the cornerstone of fruit production is now its Achilles’ heel. 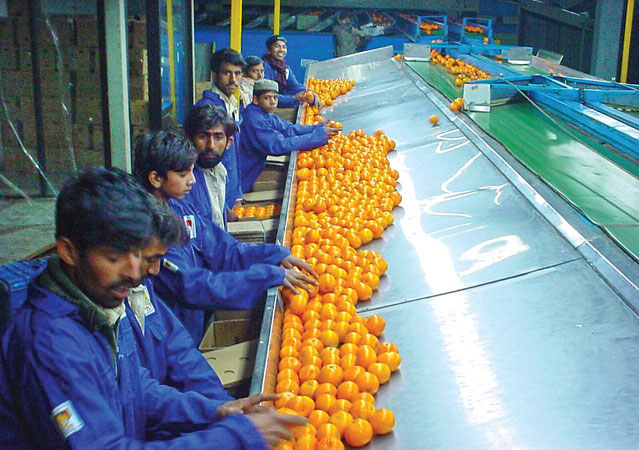 Lack of financial resources, trained manpower, information about international market and lack of pundits in export business, lack of infrastructure (transport, grading, cold storage and warehouse facilities) and lengthy process of acquiring different types of certificates are the main problems, in order of priority, due to which the farmers are hesitating to enter in the export business themselves.

In the absence of a proper system of packaging, grading and transport, Pakistan has earned a reputation for supplying poor quality products including fruits, to most export markets. There is a lack of knowledge about the marketing method required to achieve a successful entry into the export market. The packing house and cold storage facilities are also lacking. Export inspection is inadequate and improperly managed. Exporters use the cheapest packaging material resulting in disastrous losses and poor reputation in international markets. All the international airports in Pakistan lack storage facilities for fresh produce. There is only one seaport facility which is insufficient in capacity itself. The present analysis was planned to investigate the problems and prospects of export of Kinnow from Pakistan. The current exporters face issues while dealing with different institutions like PIA, PNSC, Export Promotion Bureau and State Bank of Pakistan and in various showcasing capacities like stockpiling, transportation and market data. As enough exportable excess of Kinnow will be accessible in future, in this regard, to build the fare of family now the cultivators ought to be empowered by giving them essential offices and likewise the exporters ought to be furnished with the offices like refund on personal duty, cold stockpiling at air terminals and seaports, credit and outside cash, bundling and worldwide market insight administrations.

Our greatest plight and arguably the chink in the armour of our citrus production, is the incompetency of these citrus institutes that have been set up in Pakistan

Exporters also argue that the country has not introduced new varieties of Kinnow for decades and the existing varieties have been exhausted. They also point out that other countries had developed many varieties of the fruit. They ask for the development of at least three to four new varieties, including seedless citrus with enhanced shelf life. However, the average Pakistani farmer does not possess the appropriate knowledge to grow such varieties of Kinnow. A large reason for this is the lack of government’s efforts to actually set up programs for citrus farmers which could guide them. It is the need of the hour to organize training programs that can be delivered through electronic media and by setting up real time seminars which could explain these farmers about harvesting and which variety of seeds and the best time of the season, weather updates and the necessary nutritional requirements for growing a certain new variety of Kinnows such as the seedless Kinnow. Most farmers also lack the proper equipment while dealing with new breeds of citrus fruits which could ultimately affect quality of the yield produced. Moreover, the government should also provide loans on easy installments for these farmers to bring in the required equipment needed for mass production of citrus fruits such as sprinkler and automated irrigation systems. Only 2.6 percent of Kinnow exports target the markets of developed countries, which is due to the emerging demand for seedless Kinnow by the developed countries. About 61 percent of total world exports of oranges and mandarins are of seedless varieties. This has internally led to the prices of Kinnow in Pakistan to substantially drop by more than 50% between 2016 and 2020. With the rest of the developed nations demanding seedless varieties, the king of citrus, Pakistan, sees an impending guillotine hanging above its throne.

Our greatest plight and arguably the chink in the armour of our citrus production, is the incompetency of these citrus institutes that have been set up in Pakistan. There is one institute present in Sargodha, geared specifically to the research for more feasible varieties of citrus fruits but they have produced nothing substantial in the past five years. There is also the Citrus Research Institute, Sargodha but they too had skimped when it came to contributing actual research. We head north towards Islamabad at NARC, the National Agricultural Research Center for Pakistan and here as well it’s the similar fairytale – these institutes are sleeping over vast research that could bring massive fortunes for Pakistan, but these research centers have contributed by only a minute margin perhaps. It is the fault of the government that has led these institutes to do as they please without contributing anything for the citrus production. It is urged that the government should take notice of this situation.