On May 31, 2020, an 8-year-old domestic worker, Zohra Shah, was beaten to death (and also raped) for accidentally freeing expensive parrots while cleaning their cage. This horrific incident sparked a much-needed conversation on Child Labour in Pakistan which is, sadly, not limited to just carpet weavers and football factories but is rampant in Pakistani households. 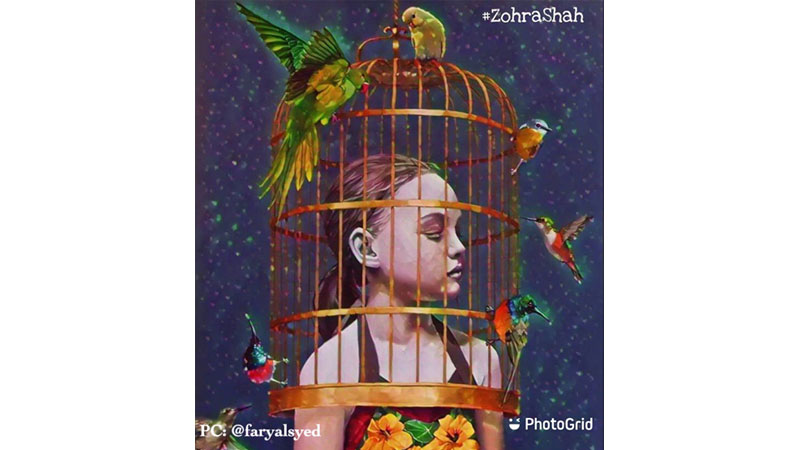 When my daughter was roughly fifty days old, I shifted back from my parents’ house to my in-laws’ house. Smack in the middle of a domestic crisis. It so happened that ALL our house-help decided to quit at that exact same time. In addition to being a flustered first-time mother handling a difficult colicky baby, I was an emotional mess, having lost my father five months earlier. My husband had office, my mother-in-law had to take over the kitchen on an emergency basis and I was all alone with a clingy, exclusively breast-fed, demanding child. I needed help.

My very concerned mother-in-law started calling people right, left and center. A caring neighbor promised to send over her help. That help came in the form of a barely 6/7-year-old girl, with big shiny eyes and a tight scarf around her small head. I was aghast. My mother-in-law was very unhappy about it but she came up with a solution-just keep the girl nearby and she can hand you the baby’s stuff or fetch things from the kitchen; we won’t make her “work”-no dusting, washing clothes or dishes, cleaning of any kind. But I politely put my foot down. I just could not. It was against my own principles. I’d rather go half-crazy (which I did!!!) but would absolutely not partake in child labour; there was no way I could possibly justify it in front of Allah. My mother-in-law understood, respected my stance and sent the girl back.

It was not like I had not witnessed working children around me-I most definitely had. Growing up, in the early 90s, we had had a boy of roughly 10-11 years in our house, albeit for a short period of time. His mother worked in another relative’s house. He did not have much workload except some dusting and the odd kitchen trips (for my grandparents), got good food to eat, he played with us siblings out in the lawns every evening-no cruelty or unfairness was meted out to him, all the desi checkboxes for “good” employers were ticked. One day he got upset over an argument with our cook and ran away in a temper, walking barefoot to his mother a good 30-minute car ride away. Around that time, I was myself barely a child (7-8 years) but that was the first inkling I got that this is not okay, he is a small child, he should not be separated from his family no matter how “better-off” he might be in a rich person’s house. It terrified me to imagine myself in his place-out in the big, scary city all alone, walking barefoot for two+ hours to reach the comfort of my mother and family. It pinched my heart; thankfully his successor was a much older helper and so the niggling thoughts subsided for the time being.

Fast forward another couple of years and I observed “educated” and well-off people around me casually employ small children to supposedly “play” with their own children, yet these kids did have to do all the chores a much older servant would have to do, all the while wistfully looking at and gathering toys they were not allowed to touch themselves. Not to mention toys that cost more than what the poor souls earned in a month. This is modern-day slavery, I used to think to myself.

Jumping forward to my foray into motherhood-from the trips to the doctor’s office to birthday parties, I’d see fellow mums making tiny helpers lug their kid’s diaper bag, dumping on these children the additional responsibility of keeping an eye on the kids as they ran around, to entertain them while Mama was busy chatting with others about ten-thousand-rupee lawn joras (outfits) or busy on her phone, breaking away every few minutes to chide the helper child on whatever they were not doing right.

Apparently it is considered a rite of passage in desi circles to employ a young-ish helper once you have a child of your own. I was constantly advised to find a suitable “saaf suthri larki” (clean, presentable girl), who could play with my daughter and do some housework on the side. I never did.

I witnessed a very “religious” Auntie who gave daily darss (religious sermons) in Ramzan and taught classes on religion the rest of the year proudly being the kingpin of finding employment for tiny working children in the guise of “helping out deserving families”.

I saw tiny kids nonchalantly being employed in huge mansions without the batting of an eyelid.

Apparently it is considered a rite of passage in desi circles to employ a young-ish helper once you have a child of your own. I was constantly advised to find a suitable “saaf suthri larki” (clean, presentable girl), who could play with my daughter and do some housework on the side

People justify it all. When/if someone dares to question this practice they are met with puzzled looks and rehearsed, predictable one-liners-we live in a poor country, how else will these families earn and sustain themselves if people like us don’t help them; their parents are destitute, they begged us to employ them; if not us, they will find work elsewhere-at least we know we will treat them better than most people do; all they do is play with our children/grandchildren; they weren’t going to school anyways; at least they get three good meals with us and the occasional pair of clothes and shoes; she/he is so smart hence I have gone the extra mile and gotten my children’s Qaari Sahab to teach her/him too; and so on.

And they’re all not incorrect either-I agree that the reasons are factually accurate and might seem justified, they might seem to be the quickest way to ease the suffering of deserving families and provide the child a safe abode in the short run, but in the bigger scheme of things we ARE aiding and abetting child labour.

Hence, I firmly believe that this subject cannot be grey-it is either black or white. You participate in child labour or you don’t, there is no middle way. It is as simple as that.

It is not okay to take away a child from their family and make them work for a living, irrespective of their conditions. If your heart breaks for a deserving family you help them directly or even indirectly (through supporting organizations which work for the betterment of deserving families via vocational training, employment, free education for their kids etc), you give your own employees a just wage so they don’t have to send their young ones to work (the minimum wage in Pakistan is roughly Rs. 17,000-it varies province to province), you raise your voice so lawmakers can make laws to protect them, you contribute towards positive social change any way you can (monetarily, by offering your professional services, volunteering your time etc) or you think up additional beneficial ways to help.

You cannot help a cause by being a part of the problem yourself.

Please understand and internalise this.

Under no circumstances is it justified to take in anyone’s minor child (even with the parents’ consent); just having that kind of privilege and power over those less fortunate than you, does not mean that you exercise it unthinkingly-you will face repercussions, if not in this world then for sure in the Hereafter. It is morally, ethically, socially and legally wrong unless and until you handle it like an informal adoption and treat the child exactly like you would your own-school, clothes, toys, play areas, restaurants, movies and the like…with, of course, no obligation to work.

Most of us are mere mortals and don’t have that sort of magnanimity in our hearts or in our pockets (I know I don’t have both, though I wish to one day)-if that is the case with you too, then simply do not employ children below eighteen. Don’t put yourself in this moral dilemma in the first place. You and I may not have a say in the employment decisions taken in our parents’ house or our parents-in-laws’ house, but we do have a personal choice on whether to be a part of the problem (by demanding work from that child) or the solution (by refusing to make that child work and clearly voicing out your stance). Choose consciously and wisely.

Rabeea Haq is a thinker, a feminist, a Pakistani living in Lahore. She believes in raising awareness about problematic aspects of the Pakistani society and culture through her writings; she aims to make this world a better place for the coming generations by highlighting important, controversial and often times overlooked topics. Her writings can be found at rabeeahaq.com