Taliban, US fail to decide date for intra-Afghan negotiations 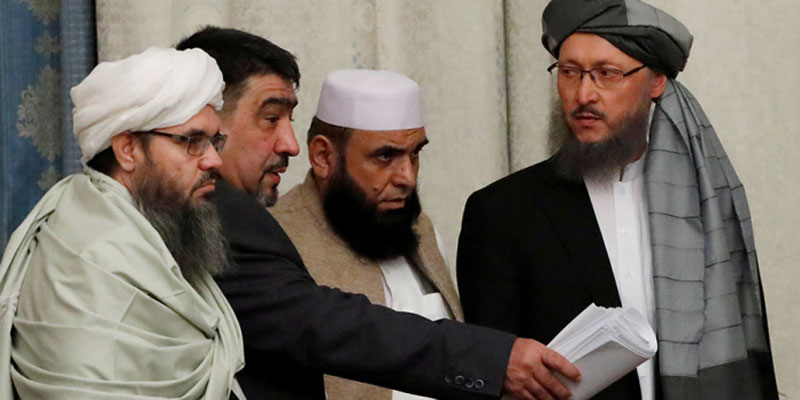 The Taliban and the US peace envoy have held talks in Qatar but failed to agree on a date for the intra-Afghan negotiations.

Taliban spokesman Zabihullah Mujahid said on Friday that Political Deputy and Chief of Political Office of the Taliban Mullah Baradar, accompanied by his team met with US Special Representative for Afghanistan Reconciliation Zalmay Khalilzad, Chief Executive Officer of US International Development Financial Corporation Adam Boehler and their delegation in Doha on Thursday.

“The meeting focused on the Afghan peace process, quick release of prisoners, commencement of intra-Afghan negotiations and other related issues,” Mujahid said in a statement.

Discussions were also held with Boehler about his economic strategy and plans for numerous regional countries aimed at the financial growth, reconstruction and development of future Afghanistan, he said.

The Qatari Special Envoy for Afghanistan, Dr. Mutlaq al-Qahtani, was also present in the meeting.

The Taliban and the US delegation could not agree to start the negotiations apparently due to differences over release of prisoners as the Taliban want release of 5000 prisoners as per the US-Taliban agreement signed in February, sources said.

The Afghan government has released 3500 Taliban prisoners, according Afghan officials. Taliban have freed 737 government’s prisoners and they will release 1000.

Taliban sources say Baradar pressed for the release of all 5000 Taliban prisoners before the start of the negotiations as was promised in the agreement.

Khalilzad said on twitter on Friday that he held a video call with President Ashraf Ghani and Chairman of the High Council for National Reconciliation Dr Abdullah Abdullah and “emphasized the immediate step is to rapidly resolve the remaining issues surrounding the start of intra-Afghan negotiations.” He said delay provides opportunities for spoilers.

The process of prisoner release hit snags after Kabul raised objections at the release of several Taliban militants, who Afghan officials describe as dangerous Taliban. Officials say they were behind major attacks including a deadly truck bomb attack near the Germany embassy.

Reports earlier suggested that Western nations have also backed the Afghan government on the issue.

Sources say President Ghani is likely to make an important announcement about the prisoner issue on Sunday. He is expected to announce a new list of the Taliban prisoners and also those whom he did not want to release. He wants to change some prisoners on the Taliban list for others, source said.

The Taliban had earlier insisted on the release of all those on the lists they had handed over to the American officials during a series of meetings in Qatar.

Taliban leaders had earlier refused to compromise on the list, however, they would announce their strategy after Ghani’s speech.

A senior Taliban leader told Daily Times this week that the Western nations and the Afghan government have no role in the prisoner issue and they should desist from interference.