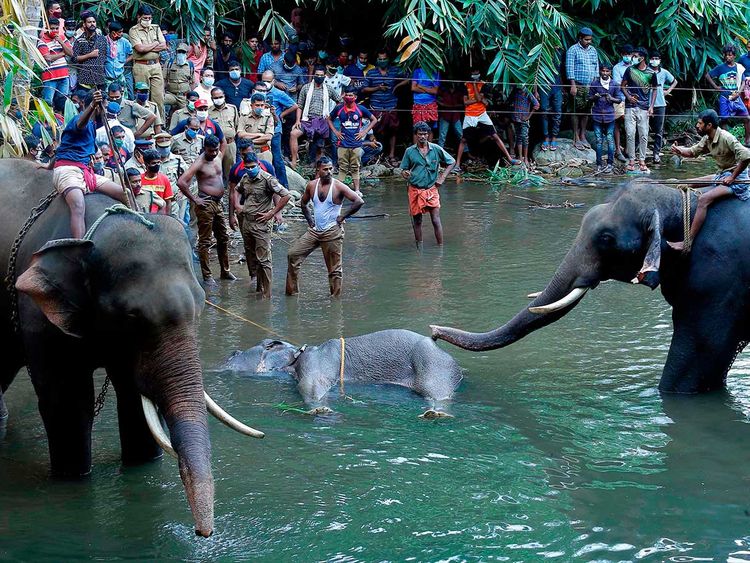 A pregnant elephant died after eating a pineapple filled with a firecracker that exploded in her mouth when locals fed it to her in India.

Forest officer Mohan Krishnan said the soon-to-be mother elephant died some days after the explosion, standing up in a river in northern Kerala’s Malappuram district.

The wild elephant left the forest to forage and approached a nearby village searching for food, where the locals offered her the tampered fruit.

No arrests have been made a week after a pregnant elephant died in Kerala’s Palakkad district, standing in a river. She had eaten a pineapple stuffed with crackers, allegedly placed by some locals. The death of the elephant and the trauma she went through has caused a huge outrage, with thousands calling for strong action against the perpetrators.

Principal Chief Conservator of Forests (Wildlife) and Chief Wildlife Warden Surendrakumar said that her jaw was broken and she was unable to eat after she chewed the pineapple which exploded in her mouth. The issue came to light when forest officer Mohan Krishnan shared about it on social media. He said that she was standing in the river with her head dipped in water. “She trusted everyone. When the pineapple she ate exploded, she must have been shocked not thinking about herself, but about the child, she was going to give birth to in 18 to 20 months,” he wrote on Facebook.

The incident took place on May 27. Forest officials said the elephant died standing in the river Velliyar after it suffered an injury in its lower jaw.

“First, we observed this animal on May 23 when we were informed by locals that an elephant has been roaming around in the private area of the forest. When one of our staff members went to see the elephant, it was observed that the wound in the lower jaw area was exposed. Later, for at least 24 hours the animal was trying to look for water and on May 24 we received information that the animal has come into river Velliyar,” said Wildlife Officer, Silent Valley National Park.