Whether “child marriage” be termed as “rape”?

The question is whether the absolute prohibited practice of “Child Marriage” should be termed as “Rape”? 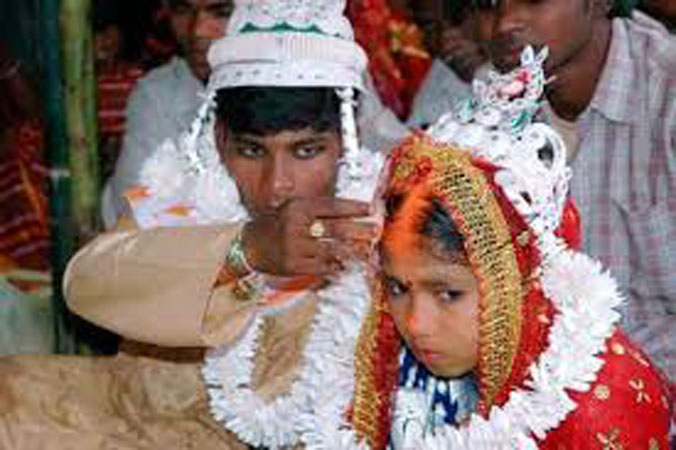 Section 375 of the Pakistan Penal Code 1860 states that “a man is said to commit rape who has sexual intercourse with a woman under circumstances falling under any of the five descriptions i.e. (i) against her will (ii) without her consent (iii) with her consent, when the consent has been obtained by putting her in fear of death or hurt (iv) with her consent, when the man knows that he is not married to her and that the consent is given because she believes that the man is another person to whom she is or believes herself to be married; or (v) with or without her consent when she is under sixteen years of age”.

It is pertinent to mention that Section 375(v) of the Pakistan Penal Code specifically provides that in case of sexual intercourse of a man, with a girl under the age of sixteen would amount to rape whether such act is committed with, or without the consent of such girl. Whereas, the word ‘rape” has been defined in black’s law dictionary as “unlawful sexual intercourse with a female without her consent the unlawful carnal knowledge of a woman by a man forcibly and against her will. The act of sexual intercourse committed by a man with a woman not his wife and without her consent, committed when the woman’s resistance is overcome by force or fear, or under other prohibitive conditions.”

It is worth reproducing Section 6 of the Child Marriage Restraint Act 1929 which states that “Where a minor contracts a child marriage, any person having charge of the minor, whether as parent or guardian or in any other capacity, lawful or unlawful, who does any act to promote the marriage or permits it to be solemnized, or negligently fails to prevent it from being solemnized, shall be punishable with simple imprisonment which may extend to six months and fine of fifty thousand rupees”.

The complete absence of the strict punishment(s) in terms of Section 6 of The Child Marriage Restraint Act 1929 is one of the major reasons for unstoppable practice of this heinous crime in Pakistan. The sheer unlawful practice of Child Marriage robs girls of their childhood and future prospects. It is obligatory on the legislature to introduce strict legislation to curtain the menace of Child Marriage and the legislature must introduce new penal actions or term the practice of Child Marriage as “Rape” in terms of Section 375 of Pakistan Penal Code 1860. More so, the Federal Government shall fulfil its constitutional obligation to protect the minors as well as children in terms of international covenants and commitments and to establish and improve Child Protection Bureau and Child Protection Homes to provide protection to minors, who are exposed to cruelty, inhuman behaviour and infringement of child rights by family members, care givers or their employers if any.

The writer is Advocate Of The High Courts Of Pakistan