Coronavirus: global economy and its recovery

If on the one hand global health infrastructure have been choked due to COVID-19, the international economy suffers in tandem -may be a tad more with grim and far reaching consequences. Bourses all around the world have shed the weight they accumulated over a decade ago (U.S. stock market is a case in point), job gains have been wiped off, Global Value Chain disrupted – debate about a recession seem old and cliched, the buzz word is depression now. However, if history is a teacher, we know that a recovery is certain. The questions are only about what shape and how much time will it take?

There is a plethora of data trying to answer the question that concerns all: When will things get better? If we engage with an economic perspective, the answer leaves one with more questions! Tracking the health of global economy can help policy makers to see where the world is headed. Thankfully, there are a few indicators to investigate.

The Credit Spreads have behaved with remarkable resilience and haven’t risen much. This shows confidence in the credit markets and that investors aren’t panicking, hitherto.

Another indicator of global economic activity is Crude oil and its consumption. Under this rubric, a mixed opinion seems prevalent. While people have started to hit the roads U.S. and few European countries, the fact that American car sales dropped by 97 percent is alarming. Kingdom Of Saudi Arabia, Russia and other oil producing countries are facing difficulties as they try to jostle between balancing their budgets and navigating through Price Wars, production cuts and falling demand. Albeit the global oil demand has fallen more than 30 percent, many of the top energy executives agree that the worst is behind us. Commuters have started to fill up the roads in Beijing and have reached levels before the crisis hit. 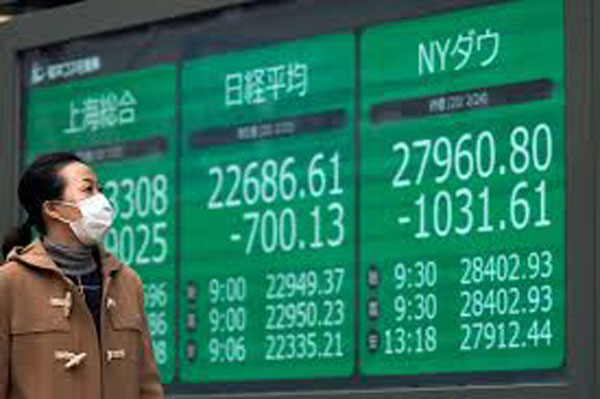 Airlines around the world have taken a severe damage with many impending bankruptcies. However, there are signs of hope. On April 30, 33,500 flights took off internationally, though two-third lower than same time last year, but a recovery after all.

It is instructive to talk about the health of the world’s largest economy. The US is the new epicentre of the disease with more than 1.2 million confirmed cases and it is being highlighted in its economy. Federal Reserve Bank of America (Fed) has used all of its ammo to stabilize the markets but have been in-vain. Their balance sheet has expanded to $6.5 trillion (in April) while it stood at $4.5 trillion in February – analysts estimates it may go up all the way to a whooping $9 trillion!

The shadow of deflation, one of the worst nemesis for an economy, looms large over U.S. Unemployment rates can reach up to 30 percent as the number of Americans filling for Unemployment benefits continue to rise. Deflation calls for a fall in consumer demand (which is a major component in GDP of most of the countries in the world). When consumers don’t buy, businesses lower their prices, and consumers wait further, setting in motion a vicious cycle. It also makes debt more expensive. The year 2020 has wiped all the gains and recoveries after the financial crisis of 2008.

The question whether we are past the peak (in terms of an economic downturn), requires an answer that is based on the chances of an imminent recession. There are three types of Recession: Real, Policy, and a Financial Crisis. Analysts have different opinions about each of them. While we still have to see serious disruptions in the Capital Expenditure figures (reference: Real Recession) and as central banks all around the world have slashed interest rates to support growth (Policy Recession) the real problem lies in the Financial Markets and therefore a possibility of another Financial Crisis – that is profoundly dangerous than the other two and takes a long time to recover from.

So, we are looking at three scenarios appertaining to recovery: V-shaped, L-shaped or U-shaped. Historical evidence suggests V shape recoveries are quite common after such pandemics. But we still don’t know whether the global economy will fall further to totally stop its activity and sharply rise thereafter.

Projections at the moment should best be taken with a grain of salt. We are still understanding this virus, studying its behavior and time will tell whether it will by seasonal and/or we will develop immunity against it or not; how many strains are out there and how many will be etcetera.

We may, and should, hope for the best – even the recent data supports the notion – but let’s prepare for the worst and don’t let our guard down. Companies should be considering a wide range of policies and try to adapt with the permanent changes this virus will leave the business world with.