The story of CJI Gogoi, BJP and Rajya Sabha seat

The former Chief Justice of India Ranjan Gogoi, on the 19th of March, took the oath as the nominated member of the Rajya Sabha amid unprecedented scenes of slogan shouting and walkout by several opposition parties, including the Congress. They cited his nomination as a “return gift” for various judgments favouring the government during his tenure that came to end in November 2019.

This was perhaps the first instance in the recent times of a protest by some parties against a member taking oath in the Rajya Sabha (Upper House of Parliament). There is a story behind the protest. Merely four months after his retirement from the coveted post of the Chief Justice of India (CJI), Gogoi was provided the Rajya Sabha seat on a platter.

Gogoi’s nomination caused an uproar in the upper house because his tenure had been mired in controversies since his appointment as the CJI. He has created history in more than one way. First, he along with other judges of the Supreme Court (SC) came on streets to protest against the CJI Deepak Mishra, his predecessor. That happened for the first time, not only in India but across the globe that four sitting justices hit the streets to register their protest, which appeared to be well planned and manoeuvred. Secondly, Gogoi was nominated for the Rajya Sabha within four months of his retirement from the top judicial job of India.

Thirdly, Gogoi’s acceptance of the nomination to the Rajya Sabha has been in critical headlines of almost all the newspapers and has attracted critical editorials. Even news portals came out with criticism for downgrading the stature of the judicial system of the country. Fourthly, he was the first nominated Rajya Sabha member who was hooted and heckled as he took the oath amid chants of shame when Rajya Sabha was in full session. Slogans of “shame on you” and “feel the deal” greeted the former justice Gogoi in parliament. Later, members of the opposition walked out in protest against his accepting the Rajya Sabha membership.

And last but not the least, Gogoi’s judgments in which the Bhartiya Janata Party (BJP) government was a party received severe criticism even of his ex-colleague judges on the bench of the SC for not following the due judicial procedure to decide the cases, and thus favouring the BJP government.

Pratap Bhanu Mehta, a noted historian and Contributing Editor of The Indian Express, wrote: “We should be deeply grateful to Justice Ranjan Gogoi. His conduct has disabused us of any illusions we might harbour about the legitimacy of the Indian Supreme Court. The government, in brazen contravention of all propriety, has given him a nomination to the Rajya Sabha. He has been shameless enough to accept it. In doing so, he has not just cast doubt on his own judgment, character, and probity he has dragged down the entire judiciary with him.” 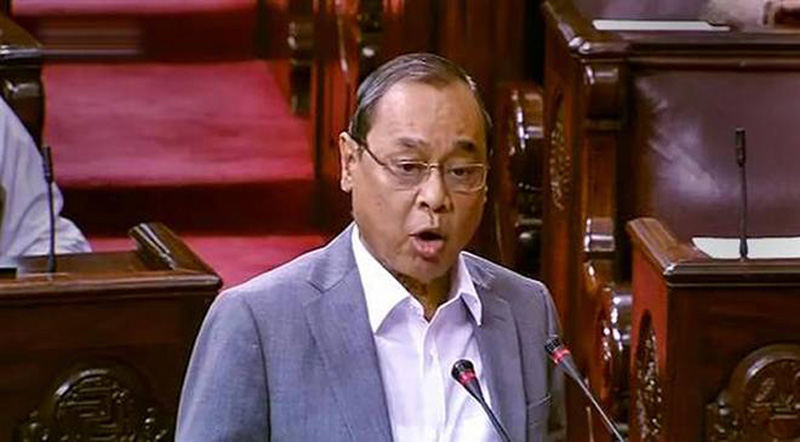 Congress Deputy Leader Anand Sharma pointed out to the media outside the Rajya Sabha, “This former justice is on record having said that post-retirement appointment or accepting any position will be a scar on the independence of the judiciary. So, he himself has become an active party to that along with the government, and that is why we protest.”

Why Gogoi has been under attack so severely from his former colleagues on the bench, SC lawyers and columnists is an important question. CJI Gogoi delivered several important verdicts, not caring for the far-reaching political ramifications, or what the impact of those judgements could be on the life of the common man in India. He did it to apparently please the BJP government.

In the Babri Masjid case, also known as the Ram Janmabhoomi title, in a cryptic judgment, author unknown, the Supreme Court ruled that idols of Ram had been illegally smuggled into the disputed site. It added that the Babri Masjid’s demolition was also illegal. Making the final decision, therefore, to build a temple at the site has created a bit of a confusion. The judgment, it appears, is not based on points of law, and that is probably one of the reasons that the authorship of the judgment is not mentioned. The judgment is based on the religious sentiments of the majority community.

Justice AP Shah stated that the 700-800-page judgment about the Babri Masjid, also known as the Ram Janmabhoomi’s title, did not carry any authorship. A 75-page addendum is also anonymous. Who wrote that important judgment and the addendum? What meaning does this judgment on a vital issue conveys if the judgment does not carry the authorship?

Justice Gogoi’s adjudication of cases such as the purchase of 30 Rafael aircrafts from France, after having an informal interaction with defence officials, is also seen as an antithesis of law. Justice Gogoi dismissed a review petition of the Rafael fighter aircraft deal without substantially dealing with the grounds on which the original judgment negating an independent investigation had been challenged. The original judgment relied upon several pieces of false and misleading information conveyed to the SC by the government in an unsigned note and handed over in a sealed cover.

In the context of the abrogation of Article 370 in Jammu and Kashmir (J&K), stripping its special status, and the related habeas corpus cases, Chief Justice Gogoi directed the petitioners to J&K High Court instead of taking up the cases immediately. Many of the habeas corpus cases of August 2019 are pending in the SC. The SC appeared to have, in a way, evaded immediate action in some cases dealing with important issues of national concern. To some extent, people have lost faith in the superior courts.

The greatest gift Gogoi gave to the government was the updating of Assam’s National Register of Citizens (NRC). His supervision of the exercise to distinguish citizens from those deemed illegal immigrants paved the way for the BJP government’s roadmap for a national policy that threatens the citizenship of India’s lakhs of Muslims. The exercise proposed stripping millions of individuals of their citizenship after subjecting them to gruelling and hyper-technical evaluation process that allowed no room for inevitable discrepancies. The cost of doing that was grave and often irreversible, but Gogoi seemed to show little consideration for those who fell by the wayside. Instead, he led the SC bench that monitored, supervised and administered a project, the NRC, that was supposed to be the responsibility of the government.

The Caravan, an eminent monthly magazine, pointed out that Justice Gogoi embarked on his mission to update the NRC with public opinion on his side. In the course of doing so, he not only violated the important principle of jurisprudence but also laid the groundwork for a national policy that threatens the citizenship status of Indian Muslims, The Caravan wrote.

Gogoi followed the path for which he had accused CJI Dipak Misra, his predecessor, at a press conference a few months before he took over as the CJI. He accused CJI Misra of abusing his powers as a master of roster to fix politically sensitive cases before convenient benches.

Newspapers questioned the integrity of Gogoi for acting in a case of alleged sexual harassment because his own staffer, in an affidavit, accused him twice of sexual harassment at his residence where she was posted. Allegations of sexual harassment and him acting as the judge in his own case give us a good insight into his behaviour. What was seen as revenge, the Delhi police, under the direct orders from the Home Ministry, suspended the husband and brother of the victim on baseless accusations.

A fabricated case was registered against the staffer by a complainant who was thereafter untraceable; the police harassed her on the basis of that case. She was then taken by the station house officer of the Tilak Marg police station to the Gogoi residence and made to apologise. She submitted herself to that only because of the terror of her harrowing experience at the hands of the Delhi police.

The report absolving Justice Gogoi was put out by the SC registry as a press release, but a copy and the substance of the report have not been made available even to the complainant. After Gogoi’s retirement, the SC reinstated the staffer, her husband and her brother. She was given the salary for the dismissal period, including a six-month maternity leave after she was reinstated.

Justice AP Shah called Gogoi’s nomination to the Rajya Sabha as quid pro quo for granting judgments that pleased the BJP government. In common law, the quid pro quo indicates that an item or a service has been traded in return for something of value, usually when the propriety or equity of the transaction is in question. A contract must involve consideration; that is, the exchange of something of value for something else of value.